Trends in Use of Prescription Skin Lightening Creams

:
The desire for an even skin tone pervades all cultures and regions of the world. Uniform skin color is considered a sign of beauty and youth. Pigmentation abnormalities can arise idiopathically with genetic predetermination, with injury and environmental exposures, and with advancing age, and can, therefore, be distressing to patients, leading them to seek a variety of treatments with professional assistance. In this short report, we describe the trends in the use of prescription lightening creams, particularly in patients with darker skin types residing in the US. Amongst 404 participants, skin hyperpigmentation had a moderate effect on patients’ quality of life, and the most common diagnosis associated with the use of a prescription product was melasma (60.8%). The most common agent prescribed was hydroquinone (62.9%), followed by triple combination cream (31.4%). It is the dermatologist’s duty to gauge the effect of the pigmentation disease on patients’ life in order to counsel, tailor, and decide on the most appropriate treatment option.
Keywords:
lightening cream; hyperpigmentation; skin of color; quality of life; melasma

The desire for an even skin tone pervades all cultures and regions of the world. Uniform skin color is considered a sign of beauty and youth, therefore, abnormalities in pigmentation can be distressing to patients, leading them to seek a variety of treatments with professional assistance. The pigmentation of the skin depends on several factors including the amount of melanin, degree of skin vascularity, presence of carotene, and thickness of the stratum corneum [1]. Skin hyperpigmentation usually results from an increased number or activity of melanocytes [1]. The most common abnormal pigmentation results from photoinduced damage to the skin in the form of freckles, lentigines, and maturational hyperpigmentation [2]. In addition to these, other common types of pigmentation disorders include melasma, periorbital melanosis, and post-inflammatory hyperpigmentation (PIH) [2]. Multiple factors including ultraviolet (UV) light and a variety of hormones are known to affect pigment cell function and proliferation and create alterations in pigmentation [3]. Skin lightening, also known as skin bleaching, refers to the use of products to lighten dark areas of the skin or achieve an overall lighter complexion. These products include creams, soaps, and pills, as well as professional treatments such as chemical peels and laser therapy. Skin bleaching reduces the concentration or production of melanin in the skin. Skin color varies depending on the quantity and distribution of melanin-producing melanocytes [4]. Since darker-skinned individuals have more melanin, hyperpigmentation disorders and the use skin depigmentation agents are common among people with skin of color both in the US and worldwide [5]. It is of utmost importance that dermatologists are informed about the products available for cosmetic skin lightening as well as their proper use and possible side effects. Hereunder, we describe United States (US) prescription lightening product trends and its association with patients’ quality of life in those with disorders of hyperpigmentation.

In this study, approved by the Boston University Institutional Review Board, 404 consecutive patients ≥18 years of age completed a questionnaire in English, Spanish, or Portuguese. All patients presenting with a complaint of hyperpigmentation were asked to participate, with right to refuse. Questions were related to demographics, location of skin darkening, etiology, product prescribed, and quality of life (QoL) as measured by the validated Dermatology Life Quality Index (DLQI) [6]. Fitzpatrick skin type and diagnosis were determined by a board-certified dermatologist.
Differences in patient characteristics were compared between prescription lightening cream users and non-users (Table 1). For continuous variables, data are shown as means with standard deviations, and for categorical variables as counts and rates. To compare continuous data, students t-tests were used and for categorical data, chi square tests. To determine independent predictors of prescription product use, a logistic regression model was created. Candidate variables were selected based on prior literature and clinical plausibility, and included sex, age, skin type, marital status, education, and hyperpigmentation disorder (Figure 1). Data analysis was performed with Statistical Analysis System (SAS) version 9.4 (Cary, NC, USA), with a p-value < 0.05 considered to be statistically significant.

A total of 404 patients with hyperpigmentation disorders were analyzed. Among these patients, the average age was 41.3 +/− 12.3, and the majority were immigrants to the USA (70.3%), female (88.6%), and had skin types IV–VI (64.4%). Of all patients, 46% were currently using a prescription lightening cream.
The most common hyperpigmentation skin disorder amongst patients using prescription lightening agents was melasma (60.8%), a common and acquired skin disease characterized by hyperpigmented macules and patches on the face [2]. The frequency of disorders among non-prescription users varied between melasma (28.6%), PIH (37.6%), and other disorders (33.8%). When patients were queried whether they were familiar with their hyperpigmentation diagnosis, the majority (>64% in both groups) were unsure. However, in the prescription user group, a larger number knew what melasma was (35.3%) as compared to those not using any prescription creams (18.9%) (p < 0.001). Although 78.3% of patients using prescription lightening creams also used sunscreen regularly, exceeding those not using prescription creams (58.2%, p < 0.01), and 36.6% did not know that the sun was a possible cause or aggravating factor of their pigmentation.
Although most participants felt that the first person to contact regarding their pigmentation was a doctor, this was more apparent in those who were using prescription lightening creams (73.9%) versus non-prescription users (55.6%) (p < 0.001). In both groups, prescription users (95.7%) and non-prescription users (98.6%) believed that the best option to treat their hyperpigmentation was a with a dermatologist.
Regarding the content of the prescription creams, hydroquinone was the most commonly prescribed (62.9%), followed by triple combination cream (TCC—fluocinolone acetonide, hydroquinone, and tretinoin) (31.4%). Azelaic acid and topical steroids were also among the prescribed components, although less frequently. In terms of subjective efficiency, 69.8% felt that triple combination cream provided the best result, followed by 36.1% for hydroquinone. Azelaic acid and prescription steroids were felt to be effective in less than 20% of the responders.
In regard to quality of life, the overall DLQI for patients with hyperpigmentation was 7.319 ± 5.21, which is consistent with a moderate impact based on prior literature [7]. DLQI scores were numerically higher among prescription users, but this did not reach statistical significance (7.59 vs. 7.09, p = 0.330). The most affected domains were embarrassment and level of self-consciousness regarding their condition and the effect it had on their social and leisure activities.
In multivariate analysis, a diagnosis of melasma was independently associated with the greater use of prescription lightening creams (OR 6.27; 95% CI: 3.44,11.43; p < 0.001), as was PIH (OR 2.12; 95% CI: 1.08, 4.14; p = 0.029). In addition, there were lower odds of lightening agent use among those with lighter skin types (OR 0.62; 95% CI: 0.39, 0.98; p = 0.042).

Our findings highlight the negative impact that hyperpigmentation disorders can have on those affected, patients tend to feel embarrassed and this feeling interferes with activities of their daily lives. This demonstrates that pigmentary disorders are not merely a cosmetic concern and therefore, when examining the effects that hyperpigmentation disorders have on QoL, equal importance and a similar sensitivity of the psychosocial impact and disease burden should be given. Since the DLQI considers physical symptoms that are not relevant to pigmentary disorders, there may be a need for increased usage of specific scales designed specifically for hyperpigmentation disorders in order to truly capture the effects that these conditions have on patients [25]. Our study confirms that HQ remains the most prescribed bleaching agent, followed by TCC. However, patients felt that TCC provided the best result. The treatment of hyperpigmentation disorders is often difficult and prolonged, which leads patients to seek help from skin care specialists. Patients appear to trust and look for guidance in their dermatologist. This guidance points to positive trends, such as patients also using more sun protection in addition to prescription products, which is an essential part of any therapeutic regimen. Thus, it is the dermatologist’s duty to gauge the effect of the pigmentation disease on patients’ life in order to counsel, tailor, and decide on the most appropriate treatment option. Further research is needed to obtain a better understanding of hyperpigmentation disorders in skin of color and to develop new, improved, and safer therapies.

This study was approved by the Boston University Institutional Review Board. Ethical Code Number: H-33375.

The authors have no relevant disclosures or conflicts of interest to report relevant to this article. 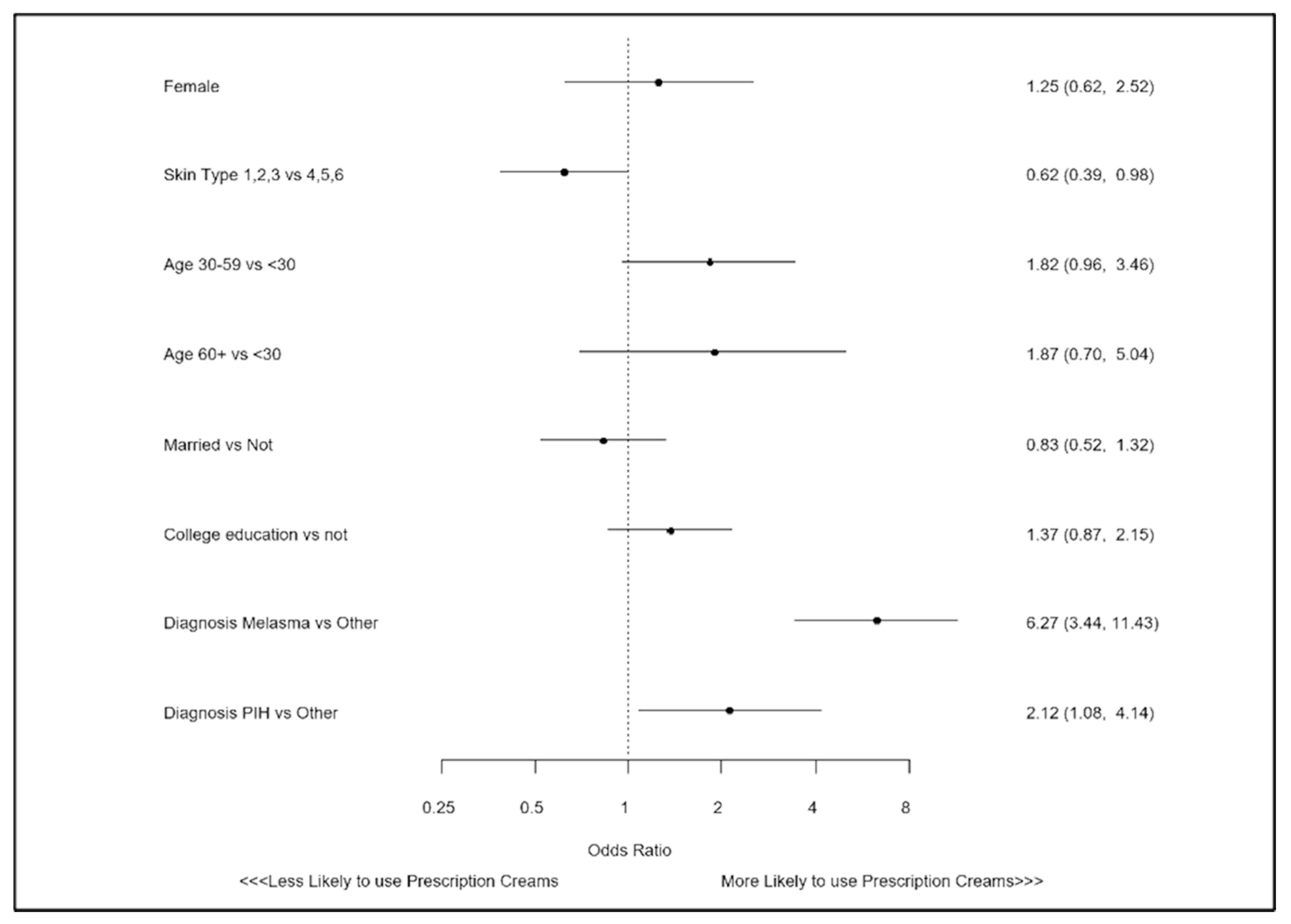