The Impact of the COVID-19 Pandemic on Pregnant Women with Perinatal Anxiety Symptoms in Pakistan: A Qualitative Study
Previous Article in Journal

Food Insecurity: Is It a Threat to University Students’ Well-Being and Success?
Previous Article in Special Issue

Mental Health of Young Australians during the COVID-19 Pandemic: Exploring the Roles of Employment Precarity, Screen Time, and Contact with Nature

The coronavirus disease 2019 (COVID-19) pandemic is widely understood to have contributed to mental health problems. In Australia, young people (18–24 years) have been disproportionately affected. To date, research has predominantly focused on the presence or absence of mental illness symptoms, while aspects of mental well-being have been overlooked. We aimed to explore associations between potential risk and protective factors and mental health more comprehensively, using the Complete State Model of Mental Health. An online survey of 1004 young Australians (55% female; M age = 21.23) was undertaken. Assessment of both mental illness and mental well-being enabled participants to be cross-classified into four mental health states. Those with ‘Floundering’ (13%) or ‘Struggling’ (47.5%) mental health reported symptoms of mental illness; a ‘Languishing’ group (25.5%) did not report symptoms of mental illness but mental well-being was compromised relative to those who were ‘Flourishing’ (14%) with high mental well-being. Multinomial logistic regressions were used to examine associations, adjusting for socio-demographic confounders. Protective factors associated with Flourishing mental health included being in secure employment, using screen time to connect with others, and reporting high levels of hope. Both incidental and purposive contact with nature were also associated with Flourishing, while a lack of green/bluespace within walking distance was associated with Languishing, absence of outdoor residential space was associated with Floundering, and lower neighbourhood greenness was associated with all three suboptimal mental health states. Precarious employment, financial stress, living alone, reporting decreased screen time during lockdowns, lower levels of hope, and high disruption of core beliefs were also associated with Struggling and Floundering mental health. Those who were Languishing reported somewhat less hardship and little disruption to core beliefs, but lower levels of hope compared to young people who were Flourishing. This study highlights that young adults require dedicated mental health services to deal with current burden, but should also be supported through a range of preventive strategies which target mental health risk factors, like precarious employment, and enhance protective factors, such as urban green infrastructure. View Full-Text
Keywords: young people; emerging adulthood; mental health; COVID-19 pandemic; screen time; nature; employment; precarity; hope; core beliefs young people; emerging adulthood; mental health; COVID-19 pandemic; screen time; nature; employment; precarity; hope; core beliefs
►▼ Show Figures 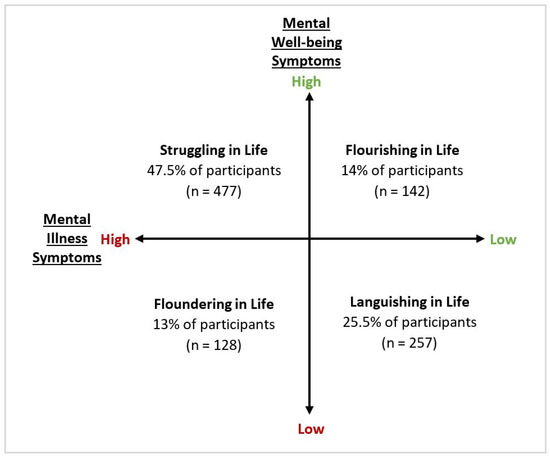