Trajectories of Body Height, Body Weight, BMI, and Nutrition Status from 1979 to 1987: A Measurement-Based Analysis of 8740 Montenegrin Male Adolescents from the Municipality of Berane

This study aimed to consolidate the body height, body weight, BMI, and nutrition status data of the overall young male population from the Municipality of Berane in order to assess the trajectories of those variables from 1979 to 1987. The sample of respondents included 8740 adolescents who were divided into nine groups according to their age. The sample of variables included body height, body weight, body mass index, and nutrition status, which were presented based on a long-established BMI categorization (underweight, normal weight, pre-obese, and obese). The descriptive statistics are expressed as the mean and standard deviation for each variable; the analysis of nutrition status was calculated based on BMI, while LSD post hoc testing with ANOVA was employed to investigate differences between the means. The results indicate that a secular trend is visible regarding body height and body weight, while no trend is visible for the BMI and nutrition status. This study’s contribution is that it provides insight into more recently published data for the studied period and in this municipality, which can significantly aid in following the secular trend throughout Montenegro.
Keywords: morphological characteristics; young males; secular trend; Montenegro morphological characteristics; young males; secular trend; Montenegro

Height and weight are good indications of an individual’s well-being, and deviations in weight and BMI may indicate the presence of illness or problems with nutrition [1,2,3]. However, in order to know which values are normal and which deviate, there must be growth references for all these parameters made on the basis of a large number of healthy individuals [4].
In recent decades, rapid economic development and better living standards have enabled positive secular trends in children and adolescents’ physical growth [5,6,7,8]. Due to this progressive change in mean growth values, which can be observed in most industrialized countries around the world [9,10], as well as in Montenegro [11], these parameters must be updated from time to time [2].
Other population-level changes have been present over the previous four decades. A global obesity epidemic is proven by progressive increases in both the mean BMI and in the prevalence of obesity in youngsters [12,13]. From 1975 to 2016, the rates of obesity for children and adolescents increased from 0.9% to 7.8% [14]. However, because these changes did not occur at the same time in all parts of the world, nor at the same pace [4,15], and also due to the specific physique of Montenegrins [16,17,18], new, hitherto unpublished data from any part Montenegro will be beneficial for further public health research.
Several studies dealing with the evaluation of changes in body height in Montenegrin adults exist, as well as those that monitor underweight, overweight, or obesity problems in school children [11,19,20]. It is important to note that few local studies have recently emerged that observe average body weight and BMI changes for an extended period of time [21,22,23,24], but they are limited to local samples. In order for the data to be generalized, scientists should dispose of data on the entire population, which exist in government key registers.
For this reason, the University of Montenegro contacted the Ministry of Defence and obtained permission to access data from the medical records of each young adolescent that were stored in the old archives of the Yugoslav People’s Army. The result is the present study, which merged the body height, body weight, and BMI data of all young male inhabitants of the Berane Municipality, which is the third largest city in northern Montenegro. The intent was to evaluate the trends from 1979 to 1987 for the purpose of collecting information on possible acceleration as well as the trajectories of nutrition status in children and adolescents.

The population of this retrospective cross-sectional study consists of male citizens of the younger population of Berane Municipality. They underwent medical examinations that were mandatory and conducted in order to determine their ability to perform military service. Most military candidates approached this examination before the age of 18, but military service may be postponed until the age of 27 (with a good reason, such as currently impaired health). Therefore, some of the candidates had their medical examinations later, which increased the average age in each generation. Covering the period from 22 May 1979 to 14 December 1987, 8836 candidates of the Yugoslav People’s Army with permanent residence in Berane took part in this examination, but male adolescents that were born in 1957 (6 respondents), 1958 (18 respondents), 1959 (40 respondents), 1960 (31 respondents), and 1979 (1 respondent) were excluded from the analysis because their numbers were insufficient to reliably describe an entire generation. Consequently, the analyzed data in this study include the sample of 8740 (18.12 ± 0.54 y) military candidates separated into nine groups: 585 respondents born in 1961 (18.13 ± 0.68 y), 1148 respondents born in 1962 (17.89 ± 0.44 y), 1178 respondents born in 1963 (18.46 ± 0.92 y), 630 respondents born in 1964 (17.85 ± 0.42 y), 1168 respondents born in 1965 (17.86 ± 0.37 y), 993 respondents born in 1966 (18.05 ± 0.38 y), 1073 respondents born in 1967 (18.22 ± 0.37 y), 1052 respondents born in 1968 (18.21 ± 0.22 y), and 913 respondents born in 1969 (18.38 ± 0.21 y).
Anthropometric measurements took place in a medical ambulance, and respondents were measured wearing just underwear. Body height and body weight were taken out of the sample of measurements collected for this research; using those data, the BMI was calculated. To assess body height and body weight, a standard medical scale with sliding weights with a fixed stadiometer was used. Following the basic rules and principles of the International Biological Program (IPB), the anthropometric measurement was applied, and body mass index was calculated based on the protocol handbook for physical form assessment connected to health [25]. Age-specific body mass index (BMI—kg/m2) cut-off points for different categories of body weight status (thinness, normal weight, overweight, and obesity) were applied according to widely used classification in the International Obesity Task Force (IOTF) [26].
Using SPSS 20.0 software (manufacturer, Chicago, IL, USA) adjusted for operation on personal computers, the data obtained during research were processed. Descriptive statistics are shown as the mean and standard deviation for all variables separately, and post hoc testing with ANOVA was used to explore differences between the means. Statistical significance was set at p < 0.05. The analysis of nutritional status was performed on the basis of body mass index (underweight, normal weight, pre-obese, and obese) [27].

It can be concluded that the results obtained in this study show a visible secular trend of male adolescents in the Municipality of Berane for the period from 1979 to 1989 in terms of body height and body weight. Furthermore, this trend is not visible when it comes to BMI and assessment of their nutritional status. The results of this study give a clear picture of what the situation was at that location on this issue in the 1980s.

The study was conducted according to the guidelines of the Declaration of Helsinki, and approved by the Ethics Committee of Montenegrin Sports Academy (MSA) (protocol code 95 and date of approval 28 December 2018). 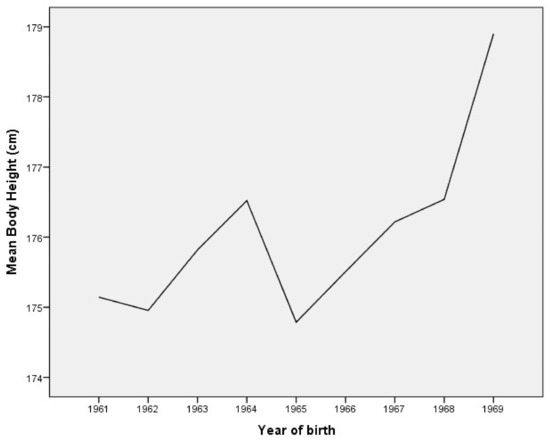 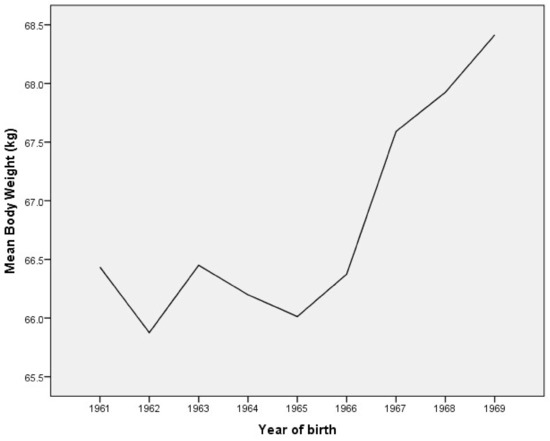 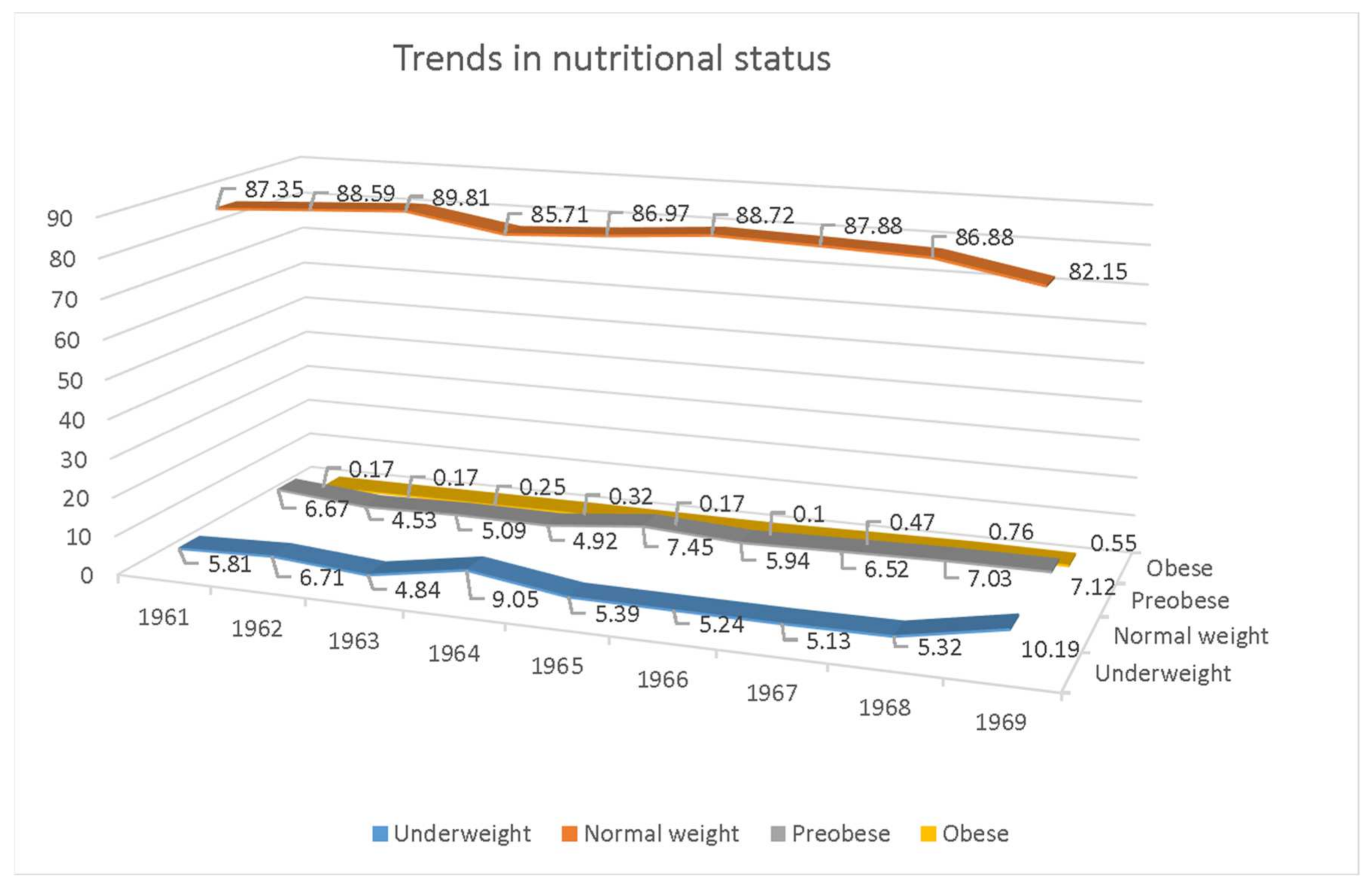