The Impact of Social Jetlag on Sleep Quality among Nurses: A Cross-Sectional Survey
Previous Article in Journal

Association between Antidepressant Treatment during Pregnancy and Postpartum Self-Harm Ideation in Women with Psychiatric Disorders: A Cross-Sectional, Multinational Study

This study sought to estimate whether there is a preventative association between antidepressants during pregnancy and postpartum self-harm ideation (SHI), as this knowledge is to date unknown. Using the Multinational Medication Use in Pregnancy Study, we included a sample of mothers who were in the five weeks to one year postpartum period at the time of questionnaire completion, and reported preexisting or new onset depression and/or anxiety during pregnancy (n = 187). Frequency of postpartum SHI (‘often/sometimes’ = frequent, ‘hardly ever’ = sporadic, ‘never’) was measured via the Edinburgh Postnatal Depression Scale (EPDS) item 10, which reads “The thought of harming myself has occurred to me”. Mothers reported their antidepressant use in pregnancy retrospectively. Overall, 52.9% of women took an antidepressant during pregnancy. Frequent SHI postpartum was reported by 15.2% of non-medicated women and 22.0% of women on past antidepressant treatment in pregnancy; this proportion was higher following a single trimester treatment compared to three trimesters (36.3% versus 18.0%). There was no preventative association of antidepressant treatment in pregnancy on reporting frequent SHI postpartum (weighted RR: 1.90, 95% CI: 0.79, 4.56), relative to never/hardly ever SHI. In a population of women with antenatal depression/anxiety, there was no preventative association between past antidepressant treatment in pregnancy and reporting frequent SHI in the postpartum year. This analysis is only a first step in providing evidence to inform psychiatric disorder treatment decisions for pregnant women. View Full-Text
Keywords: antidepressants; pharmacotherapy; pregnancy; postpartum; self-harm ideation; web-based antidepressants; pharmacotherapy; pregnancy; postpartum; self-harm ideation; web-based
►▼ Show Figures 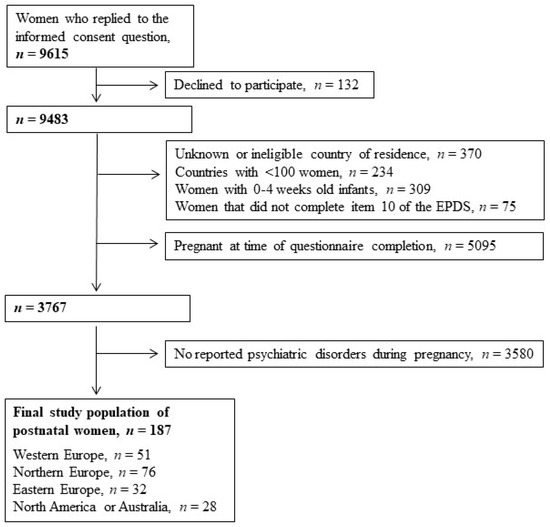