Background: Research suggests that drivers tend to engage in risk-taking behaviours on public holidays. Studies that examined the association between holidays (or other special days) and fatal injuries are inconsistent. This study used UK STATS19 data to investigate the associations of nine public holidays on road crash casualties. Methods: This retrospective study assessed UK STATS19 crash data for 1990–2017. All casualties from two vehicle crashes were initially considered; subsequently, casualties with missing data were excluded. Multiple logistic regression was estimated to explore the associations of potential risk factors with the likelihood of killed or seriously injured (KSI) casualties and to calculate adjusted odds ratios (AORs). Results: In total, 3,751,998 casualties from traffic accidents in the United Kingdom during 1990–2017 were included in the final data set; among these, 410,299 (10.9%) were KSI casualties, and 3,341,699 (89.1%) were slight injuries. Crashes on public holidays were 16% (AOR = 1.16; 95% confidence interval [CI] = 1.13–1.19) more likely to involve KSI casualties than were crashes on non-holidays. With other factors controlled for, crashes during the Queen’s 2002 Golden Jubilee and on New Year’s Day were 48% (AOR = 1.48; 95% CI = 1.06–2.07) and 36% (AOR = 1.36; 1.26–1.48) more likely to lead to KSIs, respectively. Conclusions: The proportion of crashes resulting in KSI casualties on public holidays was higher than that on non-holidays. Furthermore, crashes during the Queen’s 2002 Golden Jubilee had the highest risk of KSI casualties followed by New Year’s Day. View Full-Text
Keywords: public holiday; killed or seriously injured; fatal injury public holiday; killed or seriously injured; fatal injury
►▼ Show Figures 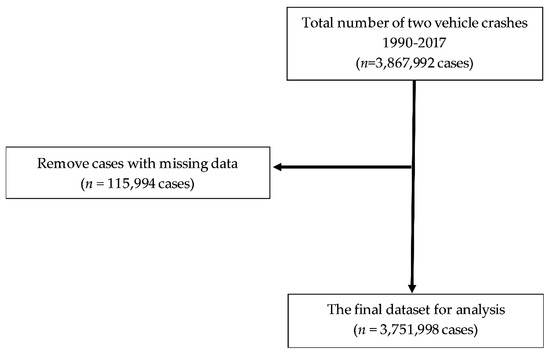