The Study of Walking, Walkability and Wellbeing in Immersive Virtual Environments
Previous Article in Journal

Effects of El Niño/La Niña on the Number of Imported Shigellosis Cases in the Republic of Korea, 2004–2017
Previous Article in Special Issue

Inclusive Parks across Ages: Multifunction and Urban Open Space Management for Children, Adolescents, and the Elderly

The Influence of Urban Park Attributes on User Preferences: Evaluation of Virtual Parks in an Online Stated-Choice Experiment

Urban green areas, such as parks, are becoming increasingly important in densifying cities. Urban parks encourage physical and social activity, recreation and relaxation, and thus eventually promote people’s well-being. The aim of the current study is to examine which urban park attributes influence the preferences of park users, in order to offer recommendations regarding how urban parks of quality can be designed. To elicit the preferences of park visitors we designed an online stated-choice experiment. Seven park attributes, in particular the number and composition of trees and the presence of benches, side paths, a playground, litter, and flowers, were manipulated in a virtual park. In an online stated-choice task, videos of these park alternatives were presented and the preferences of 697 participants were measured. It is found that especially the number of trees and the presence of flowerbeds, particularly with a diversity of flowers, influenced participants’ preferences. The presence of many benches and a playground were valued as well, but to a lesser extent. The presence of litter was found to be less troublesome than expected. Alternatives with all trees placed in one cluster were disliked. Moreover, significant standard deviations were found for the presence of side paths, a playground, and the absence of litter, which indicates that preference heterogeneity for these attributes exist. In a latent class analysis, two groups were identified, namely a Nature-loving group, who mainly valued the trees and the flowers, and an Amenity-appreciating group, who valued almost all attributes. It can be concluded that natural elements and a variety of flower species are important in an urban park, while facilities are evaluated differently by different groups of people. These findings may support park designers and policymakers in decision-making. Moreover, it illustrates the usefulness of creating a virtual park in environmental preference research. View Full-Text
Keywords: urban parks; virtual environment; stated-choice; park attributes; user preferences urban parks; virtual environment; stated-choice; park attributes; user preferences
►▼ Show Figures 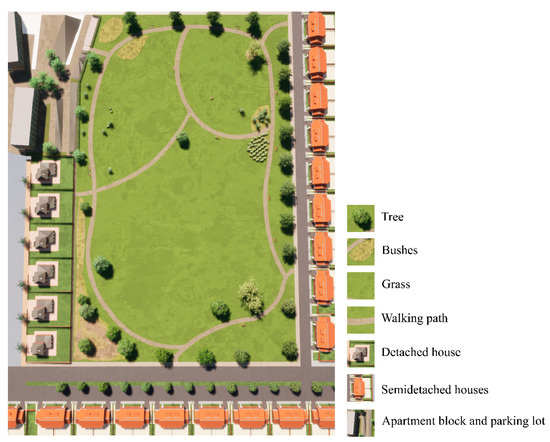