Study Protocol for the Evaluation of the Health Effects of Superblocks in Barcelona: The “Salut Als Carrers” (Health in the Streets) Project

Background: There are few published studies concerning occupational exposure to glyphosate (GLY), and these are limited to spraying, horticulture and other agricultural aspects. Therefore, the concentration of glyphosate and its metabolite aminomethylphosphonic acid (AMPA), in the urine of workers exposed to glyphosate during glyphosate production was determined, and the relationship between internal (urinary glyphosate and AMPA concentration) and external exposure dose (time weighted average (TWA) value of glyphosate in the air of workplace) was analyzed. Methods: To avoid the influence of preparations, we selected people who were only involved in GLY production (without exposure to its preparations) as our research subjects. We collected 134 urine samples of workers exposed to GLY (prototype, not preparation). The urinary concentrations of GLY and AMPA (internal exposure dose) were detected by gas chromatography-mass spectrometry. The subjects’ exposure to the amount of GLY in the air (external dose) was determined using ion chromatography. Conventional statistical methods, including quartiles, t-tests and regression analysis, were applied for data processing. Results: An on-site investigation revealed that the workers involved in centrifugation, crystallization, drying, and packaging and feeding were exposed to GLY. The TWA value of GLY in the workshop air was <0.02 mg/m3–34.58 mg/m3. The detection rates of GLY and AMPA in the urine samples were 86.6% and 81.3%, respectively. The concentration of urinary GLY was <0.020–17.202 mg/L (median, 0.292 mg/L). The urinary AMPA concentration was <0.010 mg/L–2.730 mg/L (median, 0.068 mg/L). The geometric means were 0.262 mg/L and 0.072 mg/L for GLY and AMPA, respectively. There was a correlation between the urinary concentration of GLY and AMPA and the TWA value of exposed workers (correlation coefficient [r] = 0.914 and 0.683, respectively; p < 0.01). Furthermore, there was a correlation between the urinary concentration of GLY and AMPA in the exposure group (r = 0.736, p < 0.01). Conclusions: The urinary concentration of GLY and AMPA of workers was correlated with the TWA value of workers’ exposure, which could reflect the actual exposure of the workers. View Full-Text
Keywords: workers; glyphosate; aminomethylphosphonic acid; urine; concentration distribution workers; glyphosate; aminomethylphosphonic acid; urine; concentration distribution
►▼ Show Figures 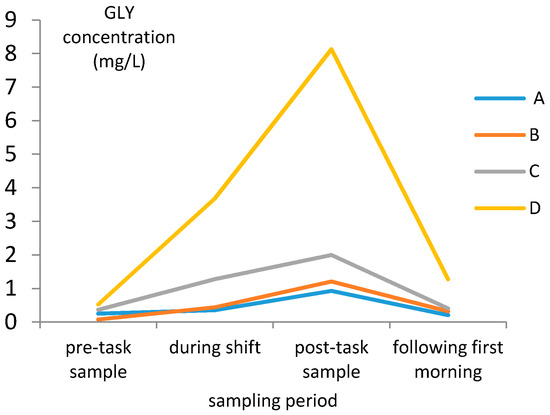