The Direct and Indirect Effects of Online Social Support, Neuroticism, and Web Content Internalization on the Drive for Thinness among Women Visiting Health-Oriented Websites
Next Article in Special Issue

Combining Direct and Indirect Measurements to Assess Patients’ Satisfaction with the Quality of Public Health Services in Romania: Uncovering Structural Mechanisms and Their Implications

Self-Perceived Health, Objective Health, and Quality of Life among People Aged 50 and Over: Interrelationship among Health Indicators in Italy, Spain, and Greece

It is well known that self-perceived health (SPH), even if it is a subjective health indicator, is significantly associated with objective health and quality of life (QoL) in the general population. Whether it can be considered an indicator of cognitive functioning and quality of life in the elderly is still an open issue. This study used a data-driven approach to investigate the interrelationship among SPH, non-communicable diseases (NCDs), QoL, and cognitive functioning to answer this question. The study sample included information about 12,831 people living in Italy, Spain, and Greece, extracted from the Survey on Health, Aging, and Retirement in Europe, in the year 2015. The additive Bayesian networks methodology was used to identify the best directed acyclic graphs (DAG) for SPH, QoL, and NCDs. Results were given as posterior estimates of generalized linear models (GLM) coefficients, with 95% credibility intervals. Good SPH was associated with a decreasing number of chronic diseases in Italy (coeff = −0.52, 95%CI: [−0.59, −0.44]), Spain (coeff = −0.53, 95%CI: [−0.60, −0.46]) and Greece (coeff = −0.57, 95%CI: [−0.64, −0.50]). Age and Body Mass Index were determinants of NCDs in all countries. QoL of elderly was associated with SPH in Italy (coeff = 0.12, 95%CI: [0.10, 0.14]), Spain (coeff = 0.16, 95%CI: [0.15, 0.18]), and Greece (coeff = 0.18, 95%CI: [0.16, 0.20]). The number of NCDs was higher for people who were not employed in Spain (coeff = 0.45, 95%CI: [0.37, 0.53]) and was decreasing for a unitary increase in years of education in Greece (coeff = −0.12, 95%CI: [−0.14, −0.09]). As a general rule, the framework of the interrelationship among NCDs, SPH, and QoL was similar for Italy, Spain, and Greece. The connections found among indicators could be proposed to identify strategies for health promotion and healthy aging among people aged 50 and above, which are viable in general and at a country level. Reinforcing strategies targeted at some health indicators could have relevant effects on other related indicators. View Full-Text
Keywords: additive Bayesian network; self-perceived health; quality of life; chronic diseases cognitive measures additive Bayesian network; self-perceived health; quality of life; chronic diseases cognitive measures
►▼ Show Figures 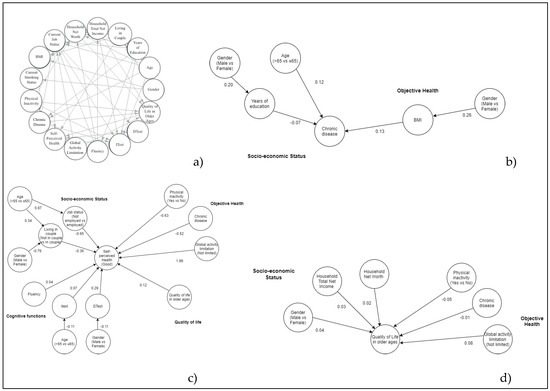