Predisposition to Change Is Linked to Job Satisfaction: Assessing the Mediation Roles of Workplace Relation Civility and Insight
Previous Article in Journal

Diarrhea in Under Five Year-old Children in Nepal: A Spatiotemporal Analysis Based on Demographic and Health Survey Data

Background: Diarrhea in children under five years of age remains a challenge in reducing child mortality in Nepal. Understanding the spatiotemporal patterns and influencing factors of the disease is important for control and intervention. Methods: Data regarding diarrhea prevalence and its potential influencing factors were extracted from the Demographic and Health Surveys in Nepal and other open-access databases. A Bayesian logistic regression model with district-specific spatio-temporal random effects was applied to explore the space and time patterns of diarrhea risk, as well as the relationships between the risk and the potential influencing factors. Results: Both the observed prevalence and the estimated spatiotemporal effects show a decreasing diarrhea risk trend from 2006 to 2016 in most districts of Nepal, with a few exceptions, such as Achham and Rasuwa. The disease risk decreased with mothers’ years of education (OR 0.93, 95% Bayesian Credible Interval (BCI) 0.87, 0.997). Compared to spring, autumn and winter had lower risks of diarrhea. The risk firstly increased and then decreased with age and children under 12–24 months old were the highest risk group (OR 1.20, 95% BCI 1.04, 1.38). Boys had higher risk than girls (OR 1.24, 95% BCI 1.13, 1.39). Even though improved sanitation wasn’t found significant within a 95% BCI, there was 93.2% of chance of it being a protective factor. There were no obvious spatiotemporal clusters among districts and each district tended to have its own spatiotemporal diarrhea prevalence pattern. Conclusions: The important risk factors identified by our Bayesian spatial-temporal modeling provide insights for control and intervention on children diarrhea in Nepal. Special attention should be paid to high risk groups of children and high risk seasons, as well as districts with high risk or increased trend of risk. Effective actions should be implemented to improve sanitation and women’s education level. District-specific control planning is recommended for local governments for effective control of children diarrhea in Nepal. View Full-Text
Keywords: diarrhea; spatiotemporal analysis; child; influencing factor diarrhea; spatiotemporal analysis; child; influencing factor
►▼ Show Figures 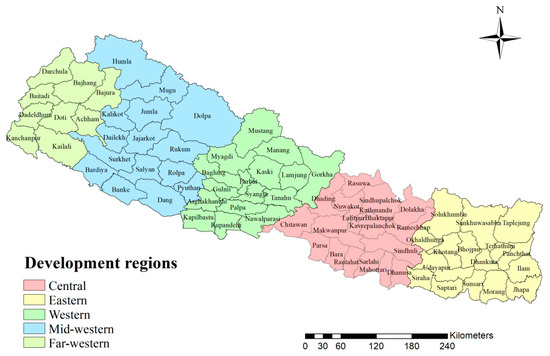