The Impact of COVID-19 Epidemic Declaration on Psychological Consequences: A Study on Active Weibo Users

:
COVID-19 (Corona Virus Disease 2019) has significantly resulted in a large number of psychological consequences. The aim of this study is to explore the impacts of COVID-19 on people’s mental health, to assist policy makers to develop actionable policies, and help clinical practitioners (e.g., social workers, psychiatrists, and psychologists) provide timely services to affected populations. We sample and analyze the Weibo posts from 17,865 active Weibo users using the approach of Online Ecological Recognition (OER) based on several machine-learning predictive models. We calculated word frequency, scores of emotional indicators (e.g., anxiety, depression, indignation, and Oxford happiness) and cognitive indicators (e.g., social risk judgment and life satisfaction) from the collected data. The sentiment analysis and the paired sample t-test were performed to examine the differences in the same group before and after the declaration of COVID-19 on 20 January, 2020. The results showed that negative emotions (e.g., anxiety, depression and indignation) and sensitivity to social risks increased, while the scores of positive emotions (e.g., Oxford happiness) and life satisfaction decreased. People were concerned more about their health and family, while less about leisure and friends. The results contribute to the knowledge gaps of short-term individual changes in psychological conditions after the outbreak. It may provide references for policy makers to plan and fight against COVID-19 effectively by improving stability of popular feelings and urgently prepare clinical practitioners to deliver corresponding therapy foundations for the risk groups and affected people.
Keywords:
public health emergencies; word frequency analysis; mental health; emotion; cognition

COVID-19 (Corona Virus Disease 2019) is a highly infectious disease with a long incubation period which was caused by Sars-Cov-2 (Severe Acute Respiratory Syndrome Coronavirus 2) [1]. The number of COVID-19 patients increased dramatically due to hundreds of millions of people traveling during the Spring Festival period. The severity of COVID-19 had been underestimated until the National Health Commission classified it as a B type infectious disease officially and took actions to fight against this disease on 20 January, 2020. Ever since then, epidemic prevention was comprehensively upgraded and marked the real beginning of universal concern, indicating widespread impacts.
The uncertainty and low predictability of COVID-19 not only threaten people’s physical health, but also affect people’s mental health, especially in terms of emotions and cognition, as many theories indicate. According to Behavioral Immune System (BIS) theory [2], people are likely to develop negative emotions (e.g., aversion, anxiety, etc.) [3,4] and negative cognitive assessment [5,6] for self-protection. Faced with potential disease threat, people tend to develop avoidant behaviors (e.g., avoid contact with people who have pneumonia-like symptoms) [7] and obey social norms strictly (e.g., conformity) [8]. According to stress theory [9] and perceived risk theory [10], public health emergencies trigger more negative emotions and affect cognitive assessment as well. These negative emotions keep people away from potential pathogens when it refers to the disease. However, long-term negative emotions may reduce the immune function of people and destroy the balance of their normal physiological mechanisms [11]. Meanwhile, individuals may overreact to any disease in case of less appropriate guidance from authorities, which may result in excessively avoidant behaviors and blind conformity [8]. Therefore, it is essential to understand the potential psychological changes caused by COVID-19 in a timely manner. Since psychological changes caused by public health emergencies can be reflected directly in emotions and cognition [3,4,5,6], we can monitor psychological changes in time through emotional (e.g., negative emotions and positive emotions) and cognitive indicators (e.g., social risk judgment and life satisfaction).
The emotions and cognition are usually measured by retrospective questionnaires, such as Oxford Happiness Inventory (OHI) [12], Symptom Checklist 90 (SCL-90) [13], Satisfaction with Life Scale (SWLS) [14], and Likert Type Attitude Scale [15,16]. However, at the time of the COVID-19 outbreak in China, it was very difficult to conduct a traditional paper survey in the affected areas; online surveys rely on the cooperation of participants, and it is difficult to meet the requirements in time, and even brings extra burdens for participants. Since we did not know the time of COVID-19 declaration, it was impossible to measure people’s emotions and cognition by a traditional survey in advance. There may be a certain deviation when requiring people to recall their mental state a week or more ago. Weibo data is emerging as a key online medium and data source for researchers to understand this social problem in a non-invasive way. Sina Weibo is a leading Chinese Online Social Networks (OSN) with more than 462 million active daily users in 2019. These users use Weibo functions (e.g., reply, @function) to interact with each other, forming rich user behavior data.
The aim of this study is to explore the impacts of public health emergency COVID-19 on people’s mental health, to assist policy makers to develop actionable policies, and help clinical practitioners (e.g., social workers, psychiatrists, and psychologists) provide services to affected populations in time.

The samples in this study were from the original Weibo data pool [17]. The data pool contained more than 1.16 million active Weibo users. Weibo is a popular platform to share and discuss individual information and life activities, as well as celebrity news in China [18].
The retrieved data included (1) user’s profile information, (2) network behaviors, and (3) Weibo messages. Privacy was strictly protected during the procedure, referring to the ethical principles [19]. We have obtained the Ethical Committee’s approval and the ethic code is H15009.
The following inclusion criteria were employed to select active Weibo users from the data pool. First, they had published at least 50 original Weibo posts around a month in total from 31 December, 2019 to 26 January, 2020. Second, their authentication type is non-institutional (e.g., individual user, etc.). Third, their regional authentication is in China, not “overseas” or “other”.
We acquired 17,865 active Weibo users finally, then fetched all their original posts published during 13 January, 2020 to 26 January, 2020 into the two-week period for the analysis.

2.2. Measurement of Psychological Traits and Procedures

In this study, we used Online Ecological Recognition (OER) [20], which referred to the automatic recognition of psychological profile (e.g., anxiety, well-being, etc.) by using predictive models [17,20,21] based on ecological behavioral data from Weibo.
We employed Text Mind system developed by the Computational Cyber Psychology Laboratory at the Institute of Psychology, Chinese Academy of Sciences to extract content features [22], including Chinese word segmentation tool [17], and psychoanalytic dictionary [23]. We used the Chinese word segmentation tool to divide users’ original microblog content into words/phrases with linguistic annotations, such as verbs, nouns, adverbials, and objects [24], and then extracted psychologically meaningful categories through the simplified Chinese LIWC (Language Inquiry and Word Count) dictionary [23]. These lexical features were data sources for word frequency analysis.
After feature extraction, we used the psychological prediction model [25] obtained from the preliminary training to predict the psychological profile of these active Weibo users. These predictive models are tools developed for online psychology research based on big data and deep learning technologies, including emotional indicators (anxiety, depression, indignation, and Oxford happiness), cognitive indicators (social risk judgment and life satisfaction), and so on. Figure 1 portrays the procedure from feature extraction to psychological indicator prediction. All the prediction models have reached a moderate correlation with questionnaire scores. The feasibility of predictive models has been repeatedly demonstrated [26,27,28].
We calculated word frequency, scores of negative emotional indicators (i.e., anxiety, depression, and indignation), positive emotional indicators (i.e., Oxford happiness), and cognitive indicators (i.e., social risk and life satisfaction) of the collected messages. We then compared the differences of psychological characteristics before and after the declaration of outbreak of COVID-19 on 20 January, 2020 through the paired sample t-test by using SPSS (Statistical Product and Service Solutions) 22, which is published by IBM (International Business Machines Corporation), New York, USA.

In this study, we compared the difference before and after 20 January on both linguistic categories and psychological profile. We found an increase in negative emotions (anxiety, depression, and indignation) and sensitivity to social risks, as well as a decrease in positive emotions (Oxford happiness) and life satisfaction after declaration of COVID-19 in China. What’s more, people show more concern for health and family, and less concern for leisure and friends. Using social media data may provide timely understanding of the impact of public health emergencies on the public’s mental health during the epidemic period.

This research was funded by National Natural Science Foundation of China, grant number 31700984. 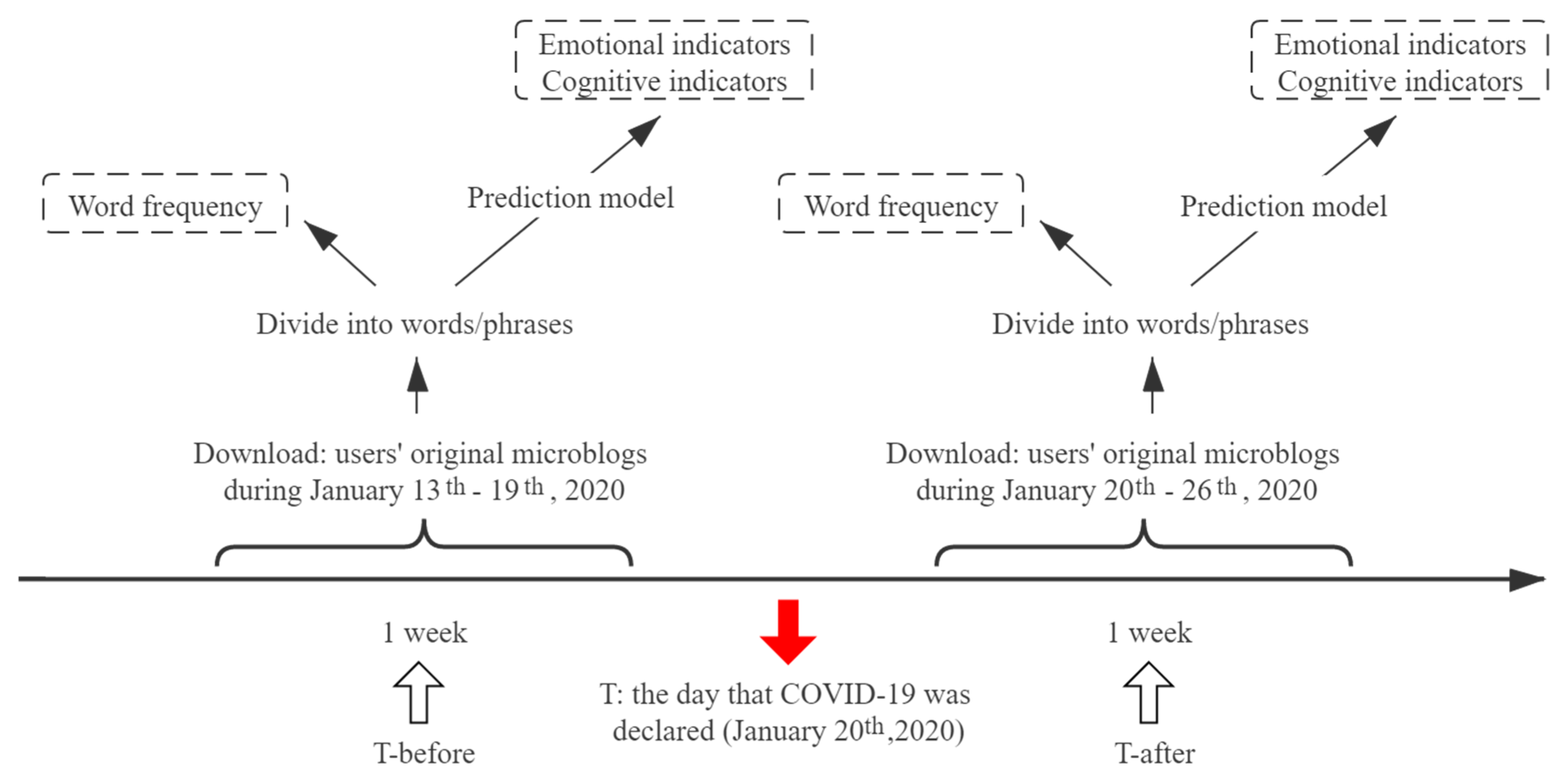