The Theory of Planned Behaviour in Medical Tourism: International Comparison in the Young Consumer Segment
Previous Article in Journal

Food Industry Donations to Academic Programs: A Cross-Sectional Examination of the Extent of Publicly Available Data

We conducted a cross-sectional, observational evaluation of food industry donations given to academic programs between 2000 and 2016. To select companies for our sample, research assistants identified all 26 companies associated with the food industry that were ranked in the Fortune 500 list for 2016 [30]. The Fortune 500 is an annual list published by Fortune magazine that ranks the 500 largest corporations in the United States according to total revenue. We operationalized the food industry as any company whose primary objective is to sell food or beverage products (e.g., Coca-Cola; supermarkets) or support the production of food through agriculture (e.g., Monsanto; Cenex Harvest States [CHS]).
During 2016, we randomly assigned one or two of the 26 companies to 15 research assistants, assigning no single company to more than one assistant. We trained the research assistants to search for donations from their assigned company to an academic program between 2000 and 2016 using the procedures described in Figure 1. Specifically, we defined academic programs as those that described their primary mission as education (e.g., universities, schools), academic research, or that directly supported education or research through a foundation or non-profit. Because our study focused on conflicts of interest in the academic sector, we excluded hospitals that were unaffiliated with universities and institutes, nonprofits, and foundations that focused on advocacy as their primary mission, even if they supported research (e.g., Susan B. Komen Foundation). We selected 2000 as the year for the start of the data collection period because widespread Internet use began in the early 2000s [31], which increased our likelihood of finding donation information online.
We instructed research assistants to use www.Google.com to identify donations by using every combination of the following keywords: name of the assigned food or beverage company plus the words “donation”, “gift”, “contribution”, “funding”, “grant”, “financial support”, “academic”, or “scholarship”. These searches yielded results that included academic (e.g., university, hospital, school) websites, food company websites, media press releases, tax documents, and other sites unrelated to academic donations. Research assistants clicked each link identified during the search to determine if the site included donation information. The first three research assistants were instructed to record the time point at which they could no longer identify new donations (i.e., when more than one hour passed without finding a new donation). Because this time point occurred at roughly five hours for each of the three assistants, we instructed the remaining 12 assistants to limit their search to five hours unless they continued to find additional donations.
Collectively, the research assistants searched online for food industry donation information for 130 hours. We asked them to include information from official company websites, press releases, and reputable media sources (e.g., The New York Times, The Wall Street Journal, and The Washington Post). One of the authors (MB) trained each research assistant to identify reputable news sources as national news outlets with the most online visitors per month, according to Nielsen and comScore [32]. We also included news sources from less well-known sources (i.e., small, local newspaper) if their articles linked to websites that confirmed the donation or contained direct quotes from donors or recipients that confirmed the donation. To maximize each research assistant’s ability to find donations during their five-hour search, we asked them to enter the link to the donation information into our dataset without recording specific donation information. A separate team of 10 research assistants visited the website links gathered by the first set of researchers and collectively spent 500 hours recording and organizing data on the: (1) monetary value of the donations; (2) year the donation was distributed; (3) name and type of recipient; (4) source of donation information; and (5) reason for the donation. Assistants also took a screenshot of the website in case it was removed at a later date.
In order to categorize the type of recipient, research assistants used the keywords that described the recipient on its home webpage. They sorted recipients into seven categories that related to any type of academic program including university; community college; preschool, elementary, middle, or high school; academic nonprofit; academic institute; academic foundation; and research hospital. We chose to include several of these categories because they were used in other studies (i.e., university [7], academic hospital [11], and institute [8]), but we added the other categories during the data collection period to provide more granular detail about the types of recipients. Research assistants also labeled the source of the documentation: (1) annual report from donor website; (2) annual report from recipient website; (3) tax document (i.e., any forms used in the United States for taxpayers and tax-exempt organizations to report financial information to the government); (4) news articles; (5) press release featured on donor website; or (6) press release featured on the recipient website. Research assistants also reviewed the screen shots for any information that described the donation’s purpose and sorted them into one or more of the following ten categories: matching gifts (i.e., a corporate donation that matches employee donations to a nonprofit organization); educational initiatives; general operations support (e.g., technological equipment); scholarships and fellowships; health and human services (e.g., obesity prevention programs); support for communities of color; research; endowed chair or professorship; and miscellaneous programs (e.g., career counseling programs).
After the dataset was complete, we searched for and removed duplicate donations (n = 35) that we identified on a tax document and a different data source. We also adjusted the donation amounts for inflation by calibrating them to the year 2016, because this was the final year of our data collection period. Then, we quantified the total number and amount of the donations for the entire sample and for each company. Researchers also calculated the frequency of the stated reasons for donations and determined the percentage of the sample that was identified via tax documents, news articles, food industry websites, or donation recipient websites. We logged trends in the number of donations and donation amounts given over time across the entire sample.

3.1. Increase in the Number and Monetary Value of Donations over Time

Figure 2 shows an overall increase in donations from 2000 to 2015. We excluded 2016 data from the figure because tax documents were not yet available for 2016 at the time of data collection. The figure shows that between 2000 and 2013, average donation amounts increased from $3 million (n = 48 donations) to $74 million (n = 300 donations). Then from 2014 to 2015, the number and monetary value of donations in our sample declined, totaling $25 million in 2015. We identified $24 million in 2016, and the decline during the latter years may reflect that tax information was not yet fully available at the time of data collection.

Using R Version 3.5, we compiled and analyzed data from 3274 donations by the 26 food and beverage companies from 2000 to 2016. Table 1 lists the donors, amounts, and number of donations, and the number of years for which we found donations for a given company. For the 26 companies, the amounts totaled $366 million, adjusting for inflation. The Hormel Food Corporation appeared to be the largest donor; its 61 donations came to more than $108 million and accounted for 29.5% of donations we identified in terms of dollar value.
Table 2 lists the 25 largest individual donations to academic programs in our sample. In 2016, Tyson Foods Corporation gave the largest individual donation ($15 million) to Arkansas Children’s Northwest, a children’s hospital affiliated with the University of Arkansas for Medical Sciences. The press release stated that the donation was earmarked for construction of the children’s hospital including a clinical area that would be labeled with the company’s name. Monsanto gave the second largest individual donation ($13,789,983) to Texas A&M University Texas AgriLife Research in 2013. The press release reported Monsanto provided the donation to fund an academic fellowship program to “support the next generation of scientific leaders working to improve rice and wheat breeding.”

3.5. Stated Reasons for the Donations

In sum, our findings reinforce the need for the food industry to provide more thorough details regarding their donation practices. The implications of our study include increasing awareness of the food industry’s donation practices, which may generate more pressure for companies to disclose donations through voluntary initiatives or public policies. If more companies created donation disclosure websites similar to Coca-Cola’s Transparency website, researchers, advocates, and policymakers could better monitor and address potential conflicts of interest that may arise from donations to academic programs.

This study was supported in part by a NIH Early Independence Award (DP5OD021373-01) from the NIH Office of the Director. 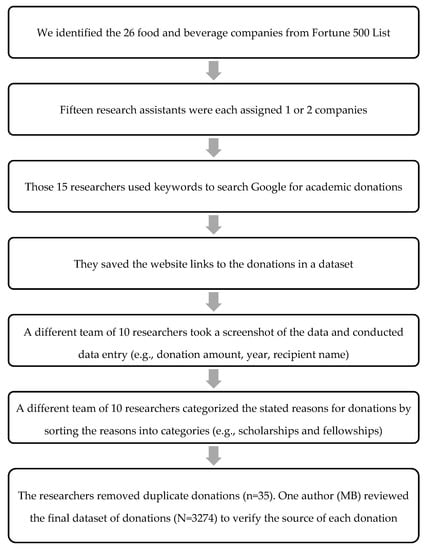 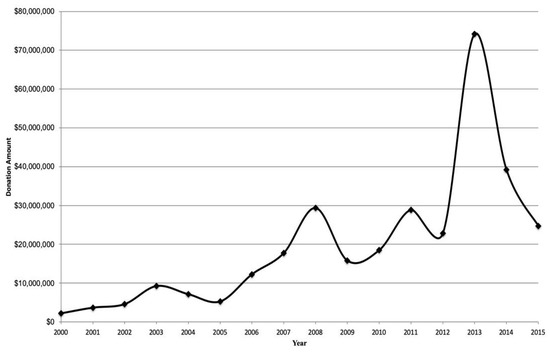 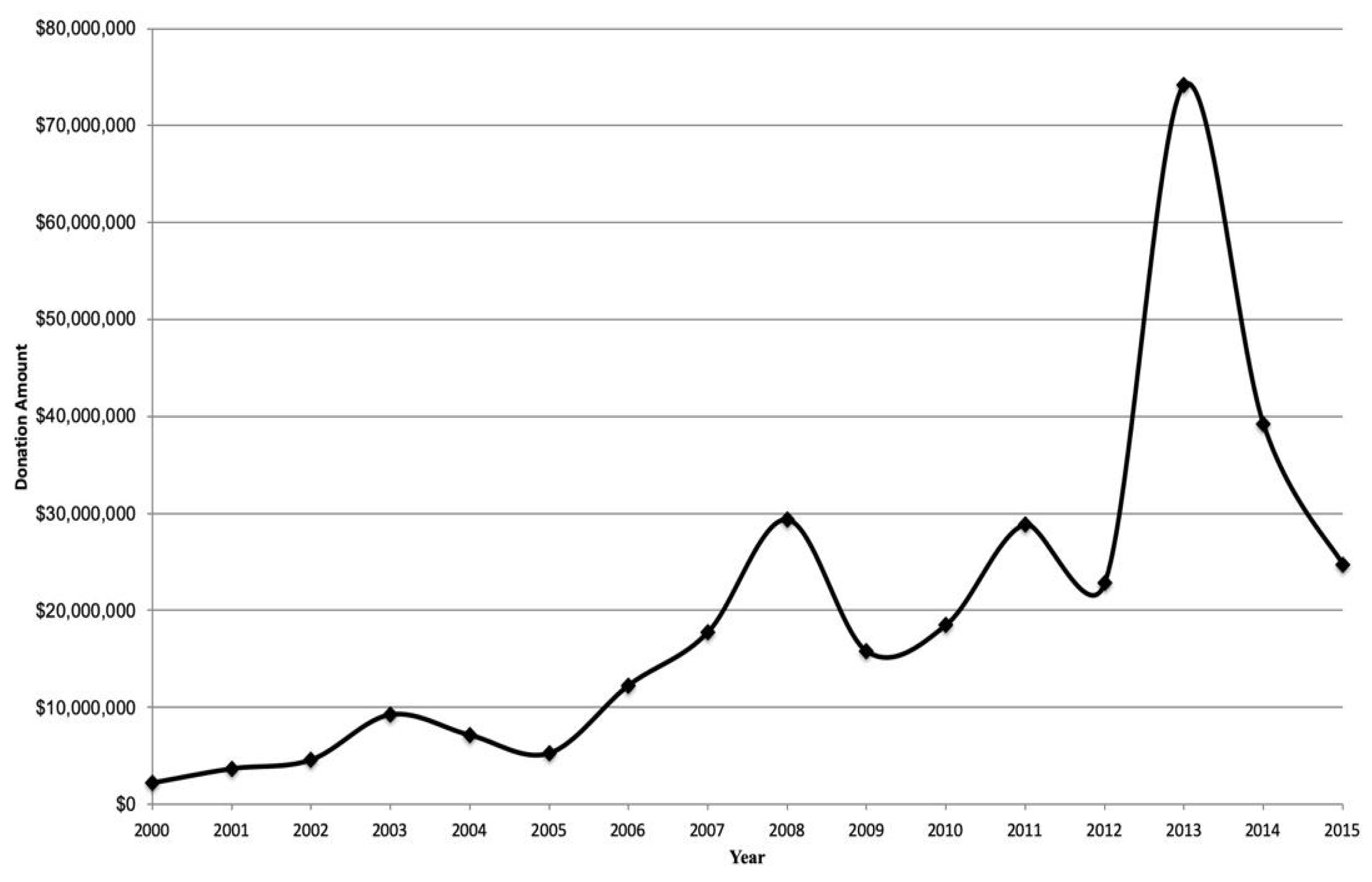