Levels, Sources and Toxicity Risks of Polycyclic Aromatic Hydrocarbons at an Island Site in the Gulf of Tonkin
Previous Article in Journal

In order to clarify the level transboundary air pollution caused by polycyclic aromatic hydrocarbons (PAHs) and genotoxic substances, aerosols were collected from forest and suburban sites in Nagasaki, west Japan, for 6 years. The PAH concentration was measured, and the genotoxicity of the substances were evaluated using the umu test. The results showed no notable trends in the concentration or toxicity of either sites throughout the study period. The suburban and forest sites shared similar seasonal fluctuation patterns and quantitative values, suggesting that the western end of Japan might be affected by long-range transported pollutants, especially in winter. PAH concentration and genotoxicity showed the same seasonal patterns of increased levels in winter and lower levels in summer. This suggests that PAHs and genotoxic substances were correlated and share common sources. Back trajectory and source analyses were conducted using the diagnostic ratios of PAHs. It was predicted that air pollution by PAHs at the forest site arise predominantly as a result of biomass or coal combustion in continental regions, such as northern parts of China and the Korean Peninsula. This is particularly expected in winter. Therefore, genotoxic substances would also be strongly influenced by transboundary pollution from the continental region. In addition, it was estimated that the contribution of transboundary PAH pollution could reach 70% at the suburban site in winter. View Full-Text
Keywords: polycyclic aromatic hydrocarbons; genotoxicity; transboundary pollution; seasonal fluctuation; pollution sources polycyclic aromatic hydrocarbons; genotoxicity; transboundary pollution; seasonal fluctuation; pollution sources
►▼ Show Figures 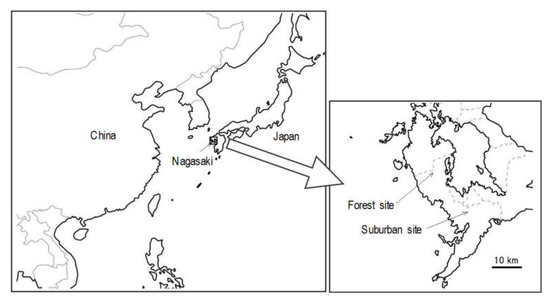