Effect of Frequency of Exercise on Cognitive Function in Older Adults: Serial Mediation of Depression and Quality of Sleep

Background: Sleep quality and depression are two reciprocal causation socioemotional factors and their roles in the relationship between physical exercise and cognition are still unclear. Methods: A face-to-face survey of 3230 older adults aged 60+ was conducted in Xiamen, China, in 2016. Frequency of exercise (FOE) referred to the number of days of exercise per week. Quality of sleep (QOS) was categorized into five levels: very poor/poor/fair/good/excellent. The 15-item Geriatric Depression Scale (GDS-15) and the Montreal Cognitive Assessment (MoCA) were used to measure depression (DEP) and cognitive function (CF), respectively. Serial multiple mediator models were used. All mediation analyses were analyzed using the SPSS PROCESS macro. Results: 2469 respondents had valid data with mean scores for GDS-15 and MoCA being 1.87 and 21.61, respectively. The direct path from FOE to CF was significant (c’= 0.20, p < 0.001). A higher FOE was associated with better QOS (B = 0.04, p < 0.01), which in turn was associated with fewer symptoms of DEP (B = −0.40, p < 0.001), and further contributed to better CF (B = −0.24, p < 0.001). Similarly, a higher FOE was associated with lower GDS-15 scores (B = −0.17, p < 0.001) which then resulted in higher MoCA scores (B = −0.24, p < 0.001). However, QOS alone did not alter the relationship between FOE and CF. Conclusions: FOE is a protective factor of CF in older adults. Moreover, CF is influenced by QOS through DEP, without which the working path may disappear. View Full-Text
Keywords: effect of frequency; depression; quality of sleep; cognitive function; serial mediation effect of frequency; depression; quality of sleep; cognitive function; serial mediation
►▼ Show Figures 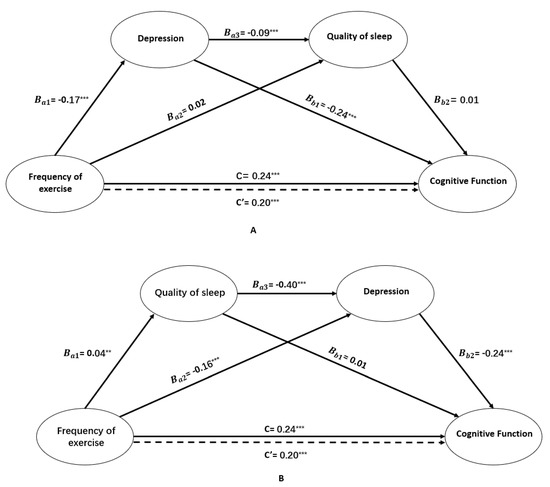