Sleep Disorders across the Lifespan: A Different Perspective
Previous Article in Journal

Past and Future Alcohol-Attributable Mortality in Europe

Our outcome measure is the alcohol-attributable mortality fraction (AAMF), which can be interpreted as the share of deaths in a population that is due to alcohol. More generally, the population-attributable fraction (in our case, the AAMF) represents the proportion by which the outcome (here: all-cause mortality) would be reduced in a given year and in a given population if the exposure to a risk factor (here: alcohol consumption) was reduced to an ideal exposure scenario [22].
We obtained the AAMFs by dividing the adjusted age- and sex-specific alcohol-attributable mortality rates by the respective age- and sex-specific all-cause mortality rates from the HMD [26]. We, then, applied Loess smoothing to convert the AAMFs by five-year age groups into AAMFs by single year of age (AAMFx,t), to be used as input in our projections.
To allow for comparison over time, we estimated age-standardised AAMFs using the country- and sex-specific age distribution of deaths in 2010 from the HMD [26]. For the past trends (Figure 1) and current levels (Table 1—first column) we used the unsmoothed AAMFs as input for the age-standardised AAMFs.

2.4. Our Novel Approach to Project Alcohol-Attributable Mortality into the Future

We employed a novel projection approach that, unlike previously applied alcohol-attributable mortality projection methodologies which mainly provided all-age estimates for the short-term future [15,16,17,18], is able to provide realistic estimates of age-specific and age-standardised alcohol-attributable mortality for the long-term future.
That is, by employing age-period-cohort modelling, we took into account the importance of the cohort dimension, as well as the age and period dimensions, in determining past trends in alcohol-attributable mortality. In addition, we avoided unrealistic future crossovers and divergence in age-standardised AAMF between country groups and sexes, which can easily occur when extrapolating, for single countries, their different past trends into the long-term future. More specifically, by implementing assumed country group- and sex-specific lower limits of future age-standardised AAMF we ensured that the projected AAMF levels for men remained higher than those projected for women, who have, historically, always had lower AAMF levels. Similarly, based on past observations, we considered it unlikely that the higher current age-standardised AAMF values in Eastern European countries for men will become lower in the future than those in Western European countries. Moreover, we avoided unrealistically large future differences between countries in age-standardised AAMF levels by assuming that the current increases in AAMF observed for selected countries will eventually turn into declines. This assumption was motivated by the observation of a wave-shaped pattern of an increase followed by a decline in AAMF in a number of European countries (see Figure 1); by the large reductions in alcohol consumption that have recently occurred, particularly in Eastern Europe [27], by the decrease in alcohol use among the youth [14]; by the recent implementation of strong alcohol prevention policies in European countries [27]; and by evidence that prevention policies have the power to bend increases into declines [27].
We present our results up until 2060, which is well beyond the current projections (see Introduction), in order to facilitate mortality projections for almost the whole currently living adult population.

For more details, see Supplementary File 1.
We projected the sex- and country-specific AAMFx,t up to 2060 by employing an advanced age-period-cohort (APC) projection methodology. We utilized the APC modelling approach by Clayton and Schifflers [28], which decomposes mortality into the shared linear trend between period and cohort (which is referred to as drift), a non-linear period effect, and a non-linear cohort effect. To simplify the interpretation and the projection, we clubbed the drift with the non-linear period effect using the Cairns et al. approach [29].
In applying the APC model to the AAMFx,t, we used a generalised logit as the link function. The logit transformation ensured projected AAMFs between zero and one, and enabled us to project (eventually) declining AAMF for countries with currently increasing AAMF. The generalisation enabled the implementation of the more restricted lower limits.
The model we applied is: where LBx represents the time-constant but population-dependent age-specific lower bounds; UBx represents the age-specific upper bounds, which equal one; and , , and capture the age pattern, the overall time trend, and the cohort deviations from the overall trend, respectively.
To obtain the age-specific lower bounds, we assumed different lower limits of age-standardised AAMF for different population groups (see Supplementary File 1—Table S1) in line with our general approach, and applied to these lower limits the population-specific age pattern observed in 2016/LAY.
For the projection of the period () and cohort () parameters—which we derived from the application of the aforementioned model—we employed different strategies according to their past trends (see Supplementary File 1—Box S1). The period parameter was projected by a quadratic curve with correlated errors for populations with predominantly increasing trends; and, for populations with predominantly declining trends, by extrapolation of the (recent) decline by the best-fitting auto-regressive integrated moving average (ARIMA) model with drift, subject to some restrictions. When the decline in kt was followed by a recent increase, we projected a stable trend. After omitting the outer three, five, or seven cohorts dependent on a statistical significance test, the recent trends for the cohort parameters were also projected by the best-fitting ARIMA model, subject to some restrictions. In the few cases in which this would lead to an increase, we projected a stable trend.
By performing 50,000 simulations, we obtained projected age-specific and age-standardised AAMF up to 2060, and their 95% projection intervals, by country and sex.

Using the GBD 2017 estimates of alcohol-attributable mortality, which we adjusted at older ages, we found that, in 2016, the age-standardised AAMF were substantially higher among men (10.1%) than women (3.3%); and were much higher in Eastern Europe (14.3%) than in Western Europe (8.2%) among men. From 1990 to 2016, age-standardised AAMF mainly increased in Eastern and North-western Europe, and then declined or stagnated; whereas in South-western Europe, AAMF mostly declined, albeit with decelerations, particularly among men. Using our novel approach to project alcohol-attributable mortality, we estimated that in the future, AAMF levels will decline in all countries and will converge across countries, but that for men, levels will be higher in Eastern and South-western Europe than in North-western Europe. The projected AAMF for 2060 are, on average, 5.1% among men and 1.4% among women.

4.2. Evaluation of Data and Methods

F.J. conceived the study. S.T.-L. obtained the data and reworked them for the analysis. A.B. developed the projection model, with input from F.J. and S.T.-L. S.E.G. conducted the analysis and projections, with input from F.J., S.T.-L., and A.B., F.J., S.E.G. and S.T.-L. interpreted the results. F.J. drafted the manuscript and the supplementary document with input from S.E.G., S.T.-L. revised the documents. A.B. provided critical comments on both documents. F.J. wrote the final versions of the documents, which all authors approved. All authors have read and agreed to the published version of the manuscript.

This work is funded by The Netherlands Organisation for Scientific Research (NWO), in relation to the research programme “Smoking, alcohol, and obesity, ingredients for improved and robust mortality projections”, under grant no. 452-13-001. See www.futuremortality.com.

The funding source had no role in the study design, collection, analysis, or interpretation of the data; in writing the manuscript; or in the decision to submit the paper for publication. All authors declare no other relationships or activities that could appear to have influenced the submitted work. F.J., S.G., and S.T.-L. declare no financial relationships with any organisations that might have an interest in the submitted work in the previous three years. A.B. is currently affiliated with the Nationale Nederlanden, but his work for the manuscript was nearly completed before he joined Nationale Nederlanden. He subsequently provided occasional expert advice on the methodology, and participated in the final critical read of the paper. 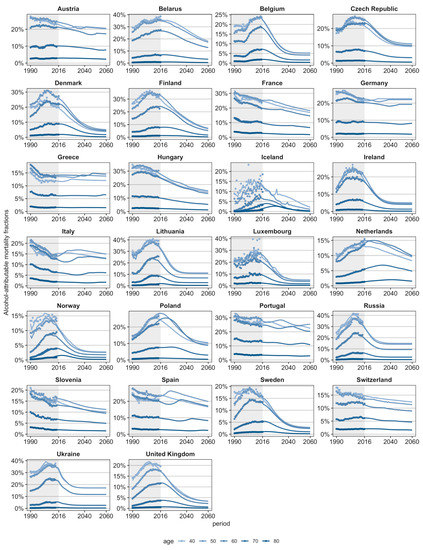 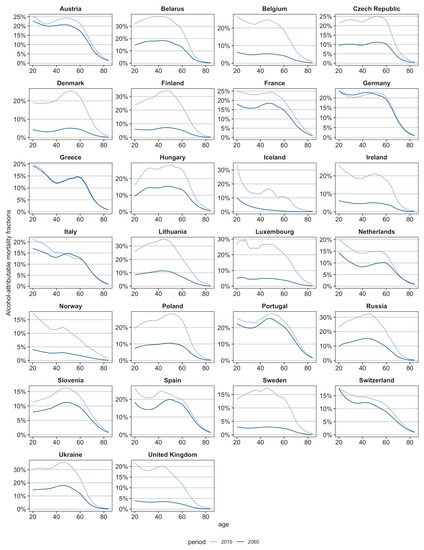 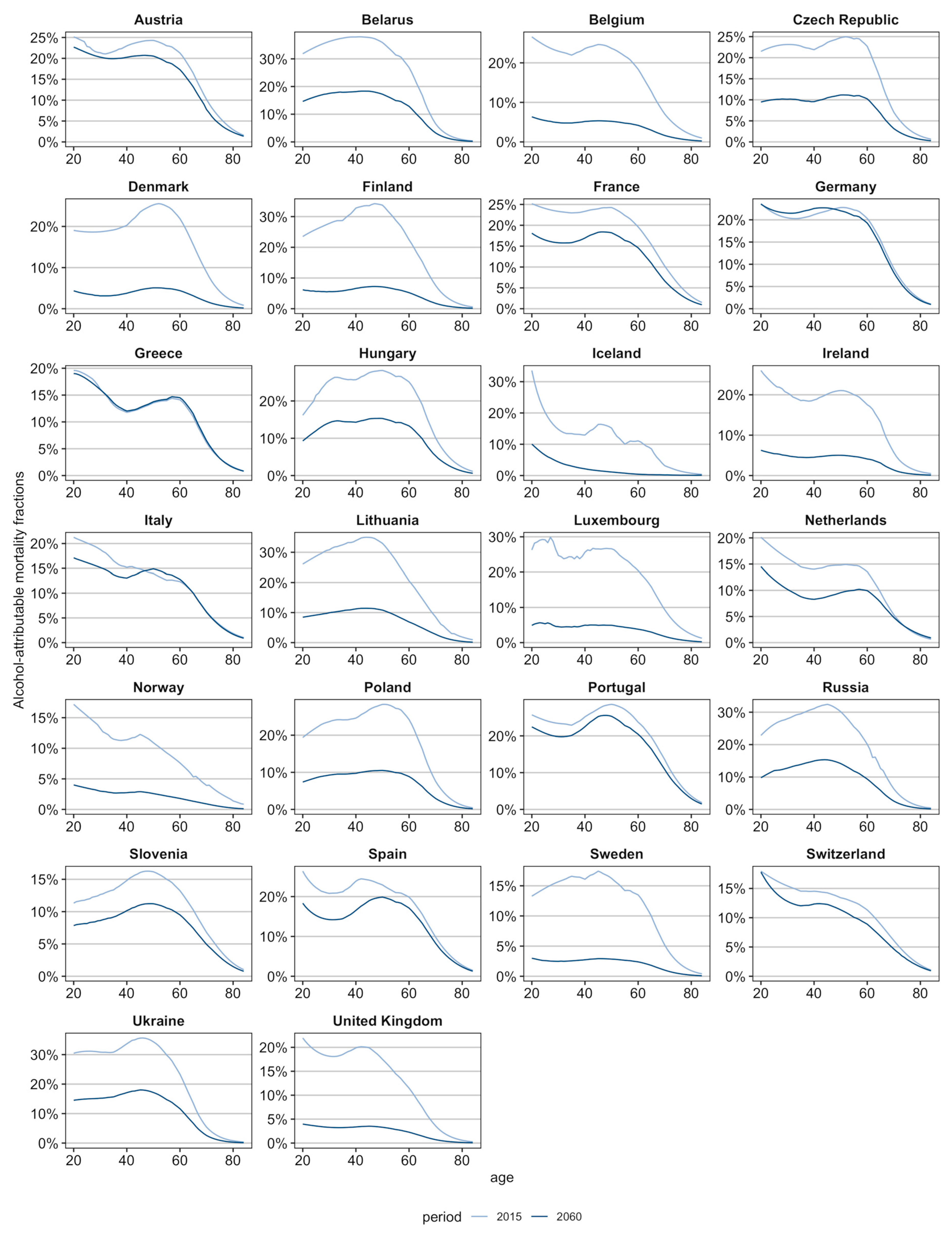 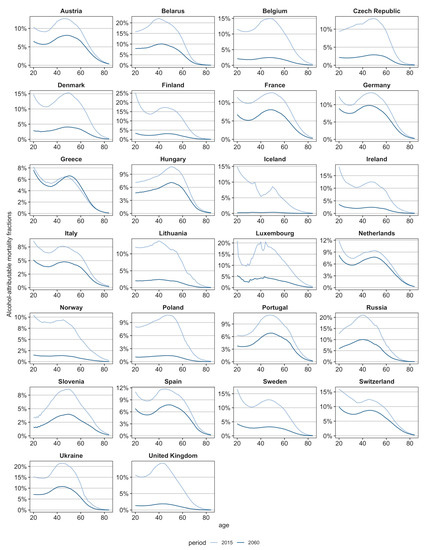 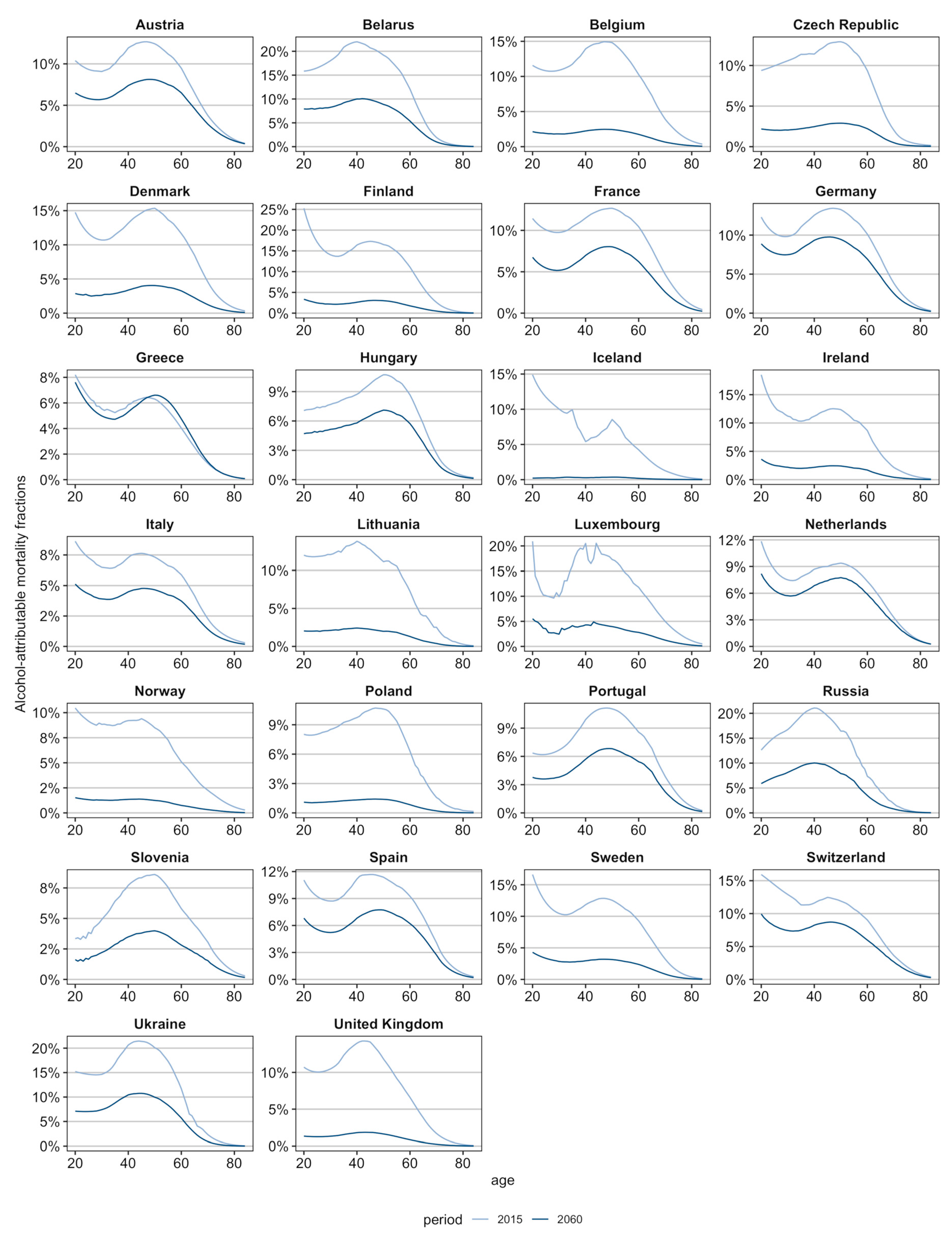 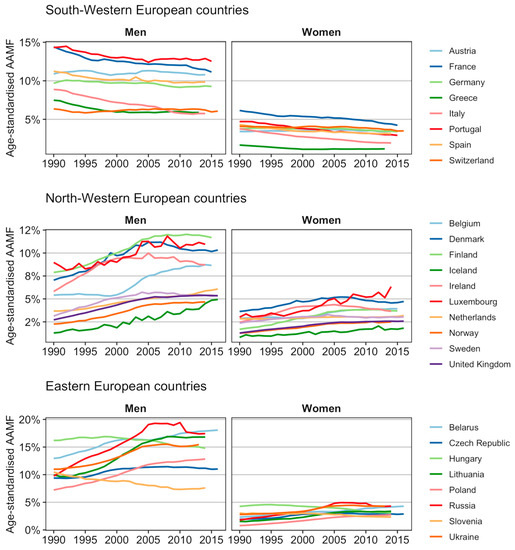 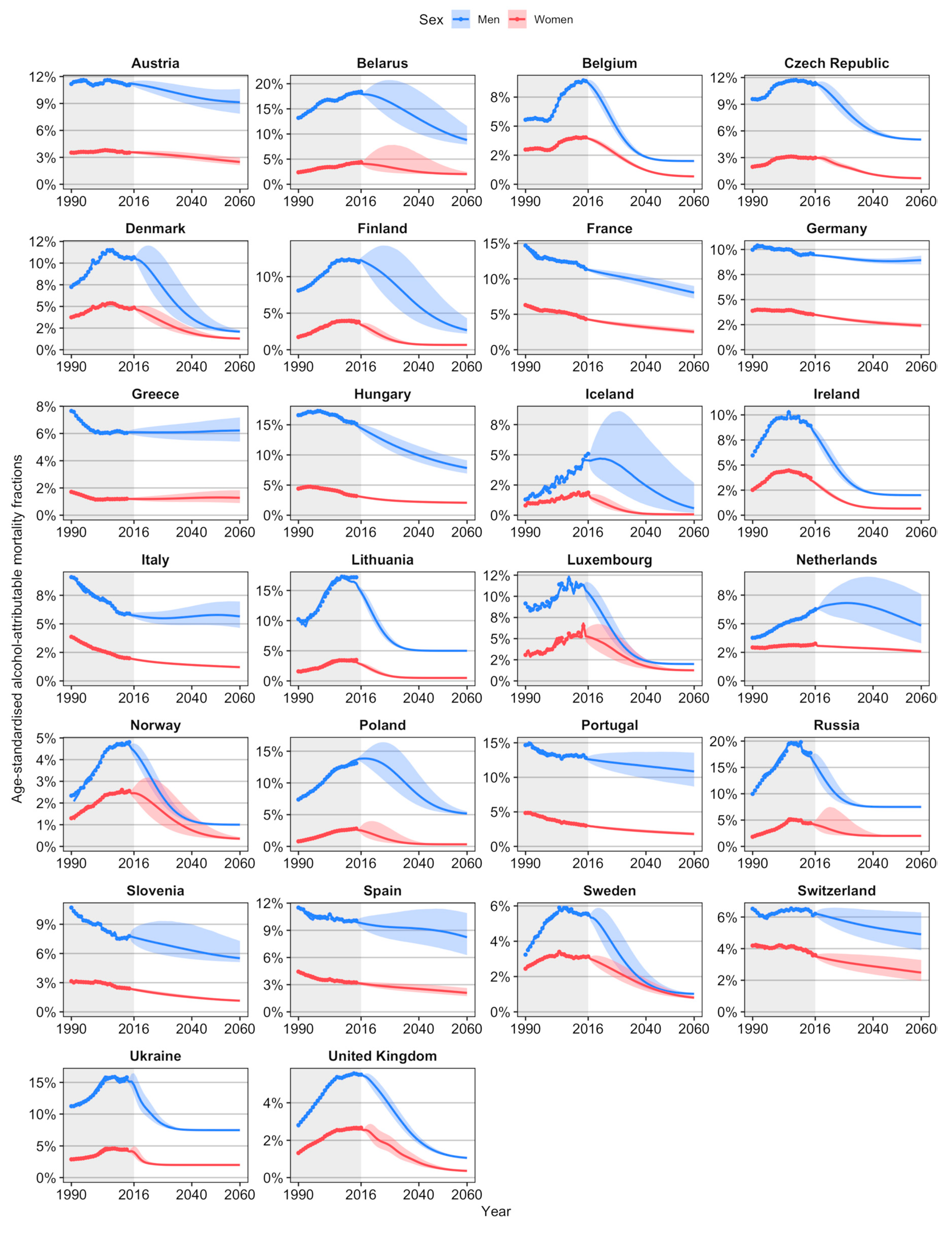