Use of Digital Technology among Adolescents Attending Schools in Bissau, Guinea-Bissau
Previous Article in Journal

Mercury (Hg) emissions from anthropogenic sources pose a global problem. In Central Asia, Kazakhstan’s central and northern regions are among the most severely Hg-contaminated territories. This is due to two former acetaldehyde (in Temirtau) and chlor-alkali (in Pavlodar) plants, discharges from which during the second half of the 20th century were estimated over 2000 tons of elemental Hg. However, the exact quantities of Hg released through atmospheric emissions to the environment, controlled discharges to the nearby aquatic systems, leakages in the cell plant, and contaminated sludge are still unknown. The present review is the initiation of a comprehensive field investigation study on the current state of these contaminated sites. It aims to provide a critical review of published literature on Hg in soils, sediments, water, and biota of the impacted ecosystems (Nura and Irtysh rivers, and Lake Balkyldak and their surrounding areas). It furthermore compares these contamination episodes with selected similar international cases as well as reviews and recommends demercuration efforts. The findings indicate that the contamination around the acetaldehyde plant site was significant and mainly localized with the majority of Hg deposited in topsoils and riverbanks within 25 km from the discharge point. In the chlor-alkali plant site, Lake Balkyldak in North Kazakhstan is the most seriously contaminated receptor. The local population of both regions might still be exposed to Hg due to fish consumption illegally caught from local rivers and reservoirs. Since the present field data is limited mainly to investigations conducted before 2010 and given the persisting contamination and nature of Hg, a recent up-to-date environmental assessment for both sites is highly needed, particularly around formerly detected hotspots. Due to incomplete site remediation efforts, recommendations given by several researchers for the territories of the former chlor-alkali and acetaldehyde plant site include ex-situ soil washing, soil pulping with gravitational separation, ultrasound and transgenic algae for sediments, and electrokinetic recovery for the former and removal and/or confinement of contaminated silt deposits and soils for the latter. However, their efficiency first needs to be validated. Findings and lessons from these sites will be useful not only on the local scale but also are valuable resources for the assessment and management of similar contaminated sites around the globe. View Full-Text
Keywords: acetaldehyde plant; chlor-alkali plant; contaminated sites; Lake Balkyldak; mercury removal; Nura River; site contamination; soil and sediment pollution; soil treatment acetaldehyde plant; chlor-alkali plant; contaminated sites; Lake Balkyldak; mercury removal; Nura River; site contamination; soil and sediment pollution; soil treatment
►▼ Show Figures 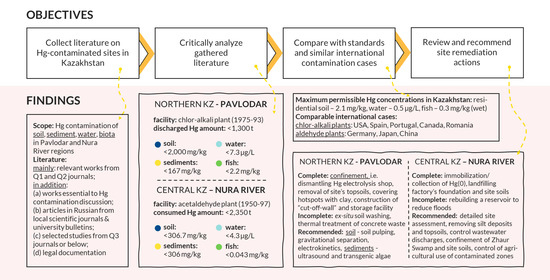