How Does Sexual Harassment Influence the Female Employee’s Negative Response in a Deluxe Hotel?
Previous Article in Journal

Nationwide Survey in Greece about Knowledge, Risk Perceptions, and Preventive Behaviors for COVID-19 during the General Lockdown in April 2020 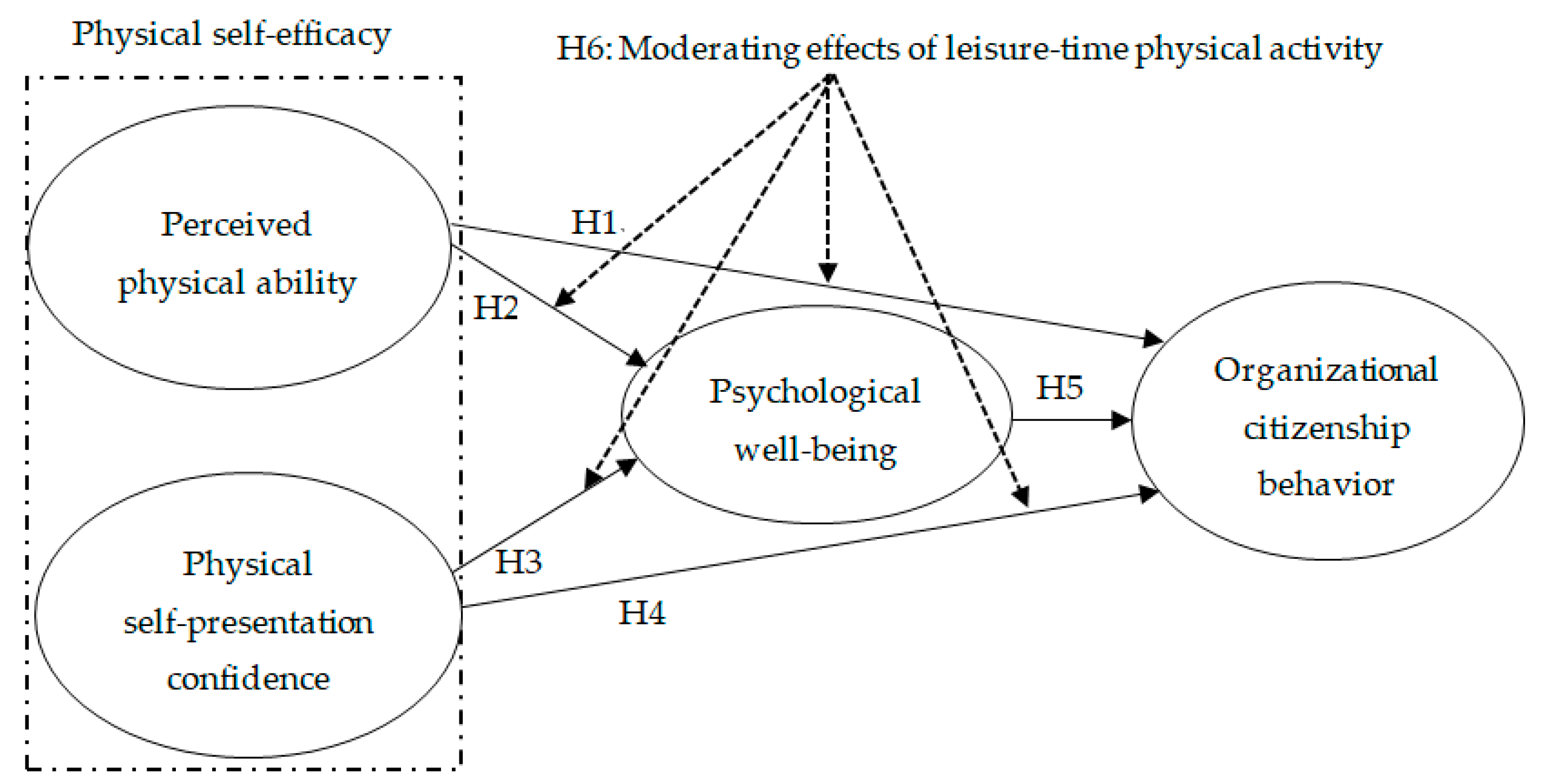 Using a convenience sampling method, the researchers contacted the head managers of 10 hotels located in Seoul, South Korea, via cellular phones. They acquired permission to attend the department meetings, including room, food and beverages, and kitchen departments. At the end of each session, the researchers provided a brief description of the present study and informed consent forms to participate in the study. After obtaining written informed consent forms, the researchers distributed the surveys and asked participants to complete them. The researchers collected the surveys right after the participants completed them.
Of 362 surveys hotel employees sampled, 346 (95.6%) returned fully completed surveys. Female participants accounted for 37.9%, and the majority of participants were in their 40 s and older (77.6%) and affiliated with the food and drink cooking department (62.7%). Most participants participated in leisure-time physical activity for 4 h and longer (77.5%). The summary of the participants’ demographics is presented in Table 1.
Additionally, the study subjects who participated in leisure-time physical activity “almost every day”, “2 or 3 times a week”, and “once a week” were considered active exercise participants (n = 162) while those who engaged in physical activity “less than one time a month” and “never” were considered non-active exercise participants (n = 184) [30].

The survey questionnaire consisted of 24 items designed to measure physical self-efficacy, psychological well-being, organizational citizenship behavior, and leisure-time physical activity (see Table 2). The survey items on participants’ demographic information include gender, age, departmental affiliation, work position, and leisure-time physical activity participation levels. All items except for demographics were adapted from the previously validated scales described below, in which a 5-point Likert scale was used, ranging from 1 (strongly disagree) to 5 (strongly agree).
Physical self-efficacy consisted of perceived physical ability (five items), and physical self-presentation (five items) was assessed with ten items taken from Ryckman et al. [16]. The exemplary item of perceived physical ability was, “My physique is rather strong”. One measure of physical self-presentation was, “I do not have any physical defects that bother me”. Psychological well-being, which refers to the satisfaction of objective conditions and the area of personal living, was measured with five items taken from Ryff [31]. The exemplary item of psychological well-being was, “I have a positive attitude toward myself”. Lastly, organizational citizenship behavior, which refers to a legitimate action that directly benefits the organization without practical reward, was measured with four items adapted from Niehoff and Moorman [23]. One measure of organizational citizenship behavior was “I attend and participate in meetings regarding the organization”.
Regarding the translation process for the scale developed in the present study, we followed Brislin’s [32] guideline. First, a native Korean speaker fluent in English translated the original English version scales into Korean. After that, a scholar who was also fluent in Korean and English back-translated the translated version into English. There were no discrepancies between the two versions. The items translated from English into Korean through back-translation process were reviewed by four professors whose expertise lies in hospitality management, sport management, and measurement reviewed the items’ relevance, representativeness, and clarity.

Based on the initial confirmatory factor analysis (CFA), the factor loading of one item measuring perceived physical ability failed to achieve the required level of 0.70 and removed from the proposed model. As a result, a total of 23 question items were used for subsequent CFA, resulting in an acceptable model fit (χ2 = 194.01, df = 129, GFI = 0.93, AGFI = 0.91, NFI = 0.94, CFI = 0.97, RMR = 0.05, and RMSEA = 0.03; Hair et al.). All factor loadings were statistically significant (p < 0.05) and ranged from 0.70 to 0.86, and average variance extracted (AVE) values ranged from 0.51 to 0.54, indicating good convergent validity. Discriminant validity was supported, as all AVE scores were higher than the squared correlations of all pairs of variables [33]. Composite reliability values were all over 0.70, indicating good reliability of the constructs (see Table 2). All factors of means, standard deviation, and correlations are also shown in Table 3.

We tested if the results were subjected to common method variance (CMV), which is defined as “variance that is attributable to the measurement method rather than to the constructs the measures represent” [37] due to two reasons: (a) data were collected from the same source (i.e., head managers of 10 hotels) even though heterogeneity of the data was ensured, in which the data were collected from 10 hotels and (b) independent, mediator, and dependent variables were measured simultaneously. To this end, we applied Harman’s single factor method [38]. We used exploratory factor analysis (EFA) using principal component analysis (PCA) with an unrotated factor solution. The results showed that the first factor explained a total of 28% of the variance. According to Andersson and Bateman [38], CMV would be an issue if the total variance explained by the first factor is over 50%. Therefore, we concluded that CMV is not an issue with the data set used in this study.

Hotel employees provide customers with various services such as reception, room information, luggage transportation, room reservation, room arrangement, laundry supply, and food provision. Hotel employees are faced with many challenges while performing their jobs. Facing a heavy workload, frequent changes in circumstances, lack of performance feedback, and low wages, they get easily irritated and exhausted affecting their behavior. They may lead to turnover [14]. Moreover, hotel workers have a high intensity of emotional labor in daily-based customer service interactions regardless of their inner psychological state to comply with organizationally mandated emotional display rules [13]. It might be challenging to expect employees to help coworkers and superiors under such a stressful environment and do devotional actions for hotel organizations. The findings of this study verified that self-efficacy is an essential factor that could enhance hotel ’employees’ psychological well-being and adopt voluntary attitudes at work. Leisure activity strengthens the anteceding role of self-efficacy for the employees’ psychological wellness and devotional behaviors toward the organization. Accordingly, hotel organizations should seek diverse support programs such as counseling and physical activity programs from a managerial standpoint. More specifically, a group counseling program adopting positive psychology can create individuals’ positive emotions when employees are faced with a work-site crisis caused by psychological and non-psychological changes, and they can learn to respond appropriately and flexibly to problems.
Additionally, hotel organizations can provide their employees with an in-house fitness center and a long-term wellness program, which allows them to adopt an active, healthy lifestyle (i.e., the balance of physical, emotional, and social health). Thus, providing such programs to employees should be considered a critical success factor for hotel organizations in the highly competitive hospitality industry. In conclusion, it may be of great importance to understand hotel ’employees’ psychological state in the work environment, provide a variety of psychological counseling and physical activity programs, and support the positive organizational culture and atmosphere.
Findings of this study also suggest that physical self-efficacy is a crucial antecedent of well-being and organizational citizenship, which leads to high employee productivity in the hotel industry. This indicates that hotel managers should pay attention to this personal trait in the recruitment process. Thus, hotel organizations are required to establish a reliable and valid physical self-efficacy test and apply it to employee recruitment and counseling program adjustment.
Despite the contribution of the present study to the organizational psychology context, limitations should be acknowledged. First, generalizing the results to employees working in other hospitality industries needs some caution as the data were collected only from one hospitality stakeholder (i.e., hotel employees). Future studies should apply the tested model to other hospitality contexts. Second, the present study found physical self-efficacy and psychological well-being as the predictors of organizational citizenship behavior, promoting organizational efficiency. It can be suggested that if the present study is replicated, other psychological factors, such as ego-resiliency and positive emotion, should be considered. Third, since the perception toward work environment and workload for hotel employees may be different, it would be interesting to see if the effects of perceived self-efficacy on psychological well-being and organizational citizenship behaviors differ by hotel employees’ work responsibilities. Lastly, because the data analyzed in the current study were collected in the pre-COVID era (i.e., summer of 2018), interpretation of the results requires caution as hotel employees’ perception of’ the leisure-time activity may not be the same as that is during or after the COVID era.