Patient-Reported Experiences in Accessing Primary Healthcare among Immigrant Population in Canada: A Rapid Literature Review
Next Article in Special Issue

The Association of Post-Materialism with Health Care Use. Findings of a General Population Survey in Germany
Previous Article in Journal

Postmenopausal Breast Cancer in Women, Clinical and Epidemiological Factors Related to the Molecular Subtype: A Retrospective Cohort Study in a Single Institution for 13 Years. Follow-Up Data

Estimates of Cancer Mortality Attributable to Carcinogenic Infections in Italy

:
Several infectious agents are ascertained causes of cancer, but the burden of cancer mortality attributable to carcinogenic infections in Italy is still unknown. To tackle this issue, we calculated the rate and regional distribution of cancer deaths due to infections sustained by seven pathogens ranked as group 1 carcinogenic agents in humans by the International Agency for Research on Cancer. Population attributable fractions related to these agents were applied to annual statistics of cancer deaths coded according to the 10th International Classification of Diseases. The estimated burden of cancer mortality attributable to carcinogenic infections in Italy during the period 2011–2015 was 8.7% of all cancer deaths registered yearly, on average. Approximately 60% of deaths occurred in men, and almost the whole burden was due to four infectious agents (Helicobacter pylori, hepatitis C virus, high-risk human papillomavirus, and hepatitis B virus). The analysis of regional distribution showed a higher number of infection-related cancer deaths in the northern regions, where the estimates reached 30 (Liguria) and 28 (Friuli Venezia Giulia) deaths per 100,000 inhabitants in 2015. Since one-twelfth of cancer deaths were attributable to these modifiable risk factors, the implementation of appropriate prevention and treatment interventions may help to reduce the impact of these infections on cancer mortality.
Keywords:
burden of cancer mortality; cancer epidemiology; cancer etiology; cancer prevention; carcinogenic infections; modifiable risk factors

Cancer is among the leading causes of death worldwide; according to global estimates of cancer burden, around 25 million new cases, almost 10 million related deaths, and 234 million cancer-attributable disability-adjusted life years were calculated for 2017 [1].
Several infectious agents have been ascertained as causes of cancer, being responsible for at least one-sixth of all global cancers [2,3]. As easily predictable, the fraction of incident cases and deaths attributable to carcinogenic infections varies from one country to another, mainly due to different local factors, such as the geographical context or the Human Development Index [2,4]. In this frame, there is growing awareness of the importance of providing country-based estimates of the burden attributable to carcinogenic infections to provide actionable metrics for the implementation of public health interventions to reduce this preventable proportion of cancers [2,3,4,5,6].
In Italy, 371,000 new cancers were diagnosed during 2019, and currently, 3.5 million people (5.3% of the whole Italian population) live with a diagnosis of cancer. Again, around 179,000 patients died due to the consequences of these diseases, which constituted the second leading cause of death in the country after cardiovascular diseases [7]. Regarding the burden of cancers of infectious origin, the International Agency for Research on Cancer (IARC) estimated an age-standardized rate of 18.8 cases per 100,000 individuals attributable to infections [2,8], and De Flora et al. calculated that 27,000 yearly cancer cases were attributable to carcinogenic infectious agents in Italy in 2018 [5]. However, nothing has been published on the impact and trend of carcinogenic infections on cancer-related mortality in the country, except for a preliminary communication that requested more accurate and detailed analyses of this burden [6], which remain unjustifiably unknown. In fact, estimates of mortality, together with other measures of morbidity, are important elements needed to refine the understanding of whole disease burden, since incidence and prevalence alone do not offer a complete view. Furthermore, providing data on mortality and its time evolution allows for evaluation of the impact of specific implemented healthcare interventions in place [9].
Therefore, to fill this gap of knowledge, we conducted this research with the aim of estimating the burden of cancer mortality attributable to carcinogenic infections in Italy, describing the evolution on a five-year period, and estimating the regional distribution of this death toll.

We selected seven microorganisms ranked as group 1 carcinogenic agents in humans by the IARC—Helicobacter pylori, hepatitis B virus (HBV), hepatitis C virus (HCV), high-risk human papillomavirus (HPV) types (such as 16, 18, 31, 33, 35, 39, 45, 51, 52, 56, 58, and 59), Epstein–Barr virus (EBV), human herpesvirus type 8 (HHV-8), and human T-cell lymphotropic virus type 1 (HTLV-1)—and the global, regional, or national population attributable fractions (PAFs) and their 95% confidence intervals (95% CIs) for the listed infectious agents based on the existing body of evidence [2,4,10,11,12]. Since the data warehouse of the Italian National Institute of Statistics (ISTAT) reported data on the causes of death according to the European Short List, without the 10th International Classification of Diseases coding system (ICD-10) specification [13], we selected the World Health Organization (WHO) Cause of Death Query online (CoDQL) as our source, a web-based system for extracting trend series detailed cause of death data submitted to the WHO by its member states on an annual basis, where deaths are recorded according to the ICD-10 coding system [14]. We gathered the number of cancer-related deaths for the period 2011 to 2015 (last year available) and calculated the total number of cancer deaths by summing the death cases for each sex as reported by the WHO death statistics. The ICD-10 diagnosis codes considered in the analysis are listed in Table 1, alongside the results.
To calculate the absolute number of cancer-related deaths attributable to carcinogenic infections, we applied the evidence-based PAFs of each carcinogenetic agent to the retrieved death statistics. Following a strategy reported elsewhere [4], some analysis adjustments were performed. First, the estimation of mortality attributable to liver cancer associated with HBV and HCV infections was calculated considering their prevalence in Italy and adjusted by the relative risk of each infection [2,11]. Second, 5% of non-Hodgkin lymphoma due to H. pylori was assumed to be localized to the stomach [12]. Third, age-standardized relative risks for HPV-related vulvar carcinoma were considered for age ranges 15–54, 55–64, and ≥65 years [4].
To investigate the regional distribution of cancer deaths due to carcinogenic infections, the calculated national percentage of deaths attributable to infections with seven agents was applied to the regional cancer deaths statistics diffused on an annual basis by the Italian Ministry of Health, and weighted against the resident population of each Italian region according to ISTAT statistics for the same year [13,15]. To facilitate a comparison, results are presented per 100,000 inhabitants, with 95% CIs computed based on a Poisson approximation [16].
Data for the 2015 year are presented as absolute numbers, counts (percentage) with lower and upper 95% CIs (where available in literature), and mean and standard deviation (SD). Results for the previous four years are included to describe the five-year time evolution of the investigated mortality burden. Analyses were conducted with R statistical software v. 4.0.0 (The R Foundation, Vienna, Austria) [17]; the map was designed using QGIS v. 3.14.16 ‘Pi’ (OSGeo, Beaverton, OR, USA) [18].

In Italy, one-twelfth of cancer deaths are potentially attributable to infections due to carcinogenic agents. Many of these risk factors are both preventable and treatable through existing interventions. Data from this study may help clinicians, public health specialists, and policymakers to enhance initiatives to reduce the impact of these infections, the related mortality burden, and the associated healthcare costs. 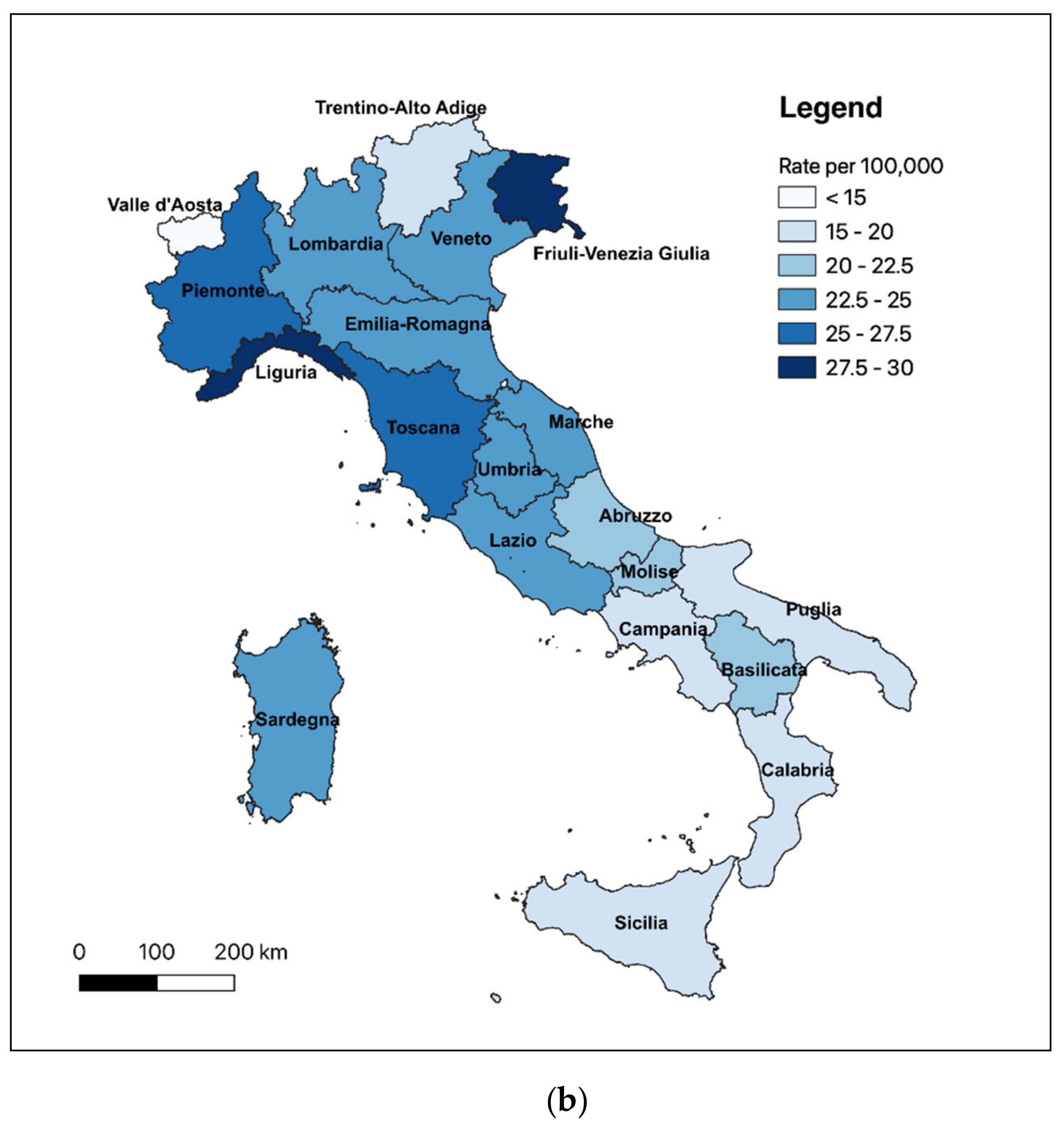