Waste Separation Behaviour of College Students under a Mandatory Policy in China: A Case Study of Zhengzhou City

After a pilot study in November 2019, a semi-structured questionnaire was finalized and comprised a mix of closed and open-ended questions aimed to uncover respondent participation in waste separation and the factors which may influence their behaviour under mandatory measures. The questionnaire comprised 23 questions set out in three sections. The first section covered demographic information (gender, year of study, etc.). The second section comprised four questions which aimed to explore the respondents’ waste source separation behaviour, and the condition of practicing/not practicing waste separation. The third section comprised 14 questions, which sought to explore the influencing factors of waste separation behaviour, such as respondents’ attitudes towards waste separation, their willingness to separate waste and understanding of relevant knowledge. For some of the questions the respondents were free to select more than one answer. The inclusion of most of the variables were based on existing research (see Table 1), but a few variables were tailored specifically for this research, for example, conditions under which people would do/not do waste separation, effect of distance to the bin, reward, penalty, time constraint on the waste sorting behaviour (marked ‘-’ in Table 1).
After obtaining ethical approval from the College of Information and Management Science, Henan Agricultural University, the full survey was undertaken in January 2020. A group of one postgraduate and five undergraduate students was employed to conduct the data collection, and they received training in survey skills before the fieldwork.
Face-to-face intercept interviews were carried out on 59 university campuses in Zhengzhou. Six investigators, two as a group, visited 1–2 universities a day and met students in the libraries, classrooms, dining halls, dormitories and corners in the buildings, out-door sports areas, and asked them to complete the questionnaire and return them face to face. The questionnaire was often handed out in batches so the students can work on them at the same time. From 1 to 15 January 2020, a total of 2000 questionnaires were distributed, of which 1689 were considered valid. After the 15 January when most students went home for the Chinese New Year, the questionnaire was sent to potential respondents studying in another three universities (there were 62 universities in total in Zhengzhou at the time of the survey), and a total of 58 completed questionnaires were returned. This makes a total response of 1747 (1689 + 58) completed questionnaires. There was no reward for returning a questionnaire (online or offline).
SPSS 24.0 (IBM, Armonk, NY, USA) was employed to store and analyse the data. Crosstab analysis, Chi-square test and Fisher’s exact test were used to explore the factors affecting the waste separation behaviour of college students under the mandatory waste separation regulation.

Of the total respondents, 42.7% were male and 57.3% were female, and 96.1% were undergraduates while 3.9% were doing a postgraduate programme (including masters and PhDs) (which is around the average level of postgraduate enrolment rate in universities in Zhengzhou). In terms of subject area, 46% were studying an arts-based subject while 54% were studying a science-based subject. Within the 1679 undergraduate students, 1672 indicated their year of study and of these 31.7% were in their first year of study, 29.4% were in their second year, 28.1% in their third year and 10.8% in their final year. Most postgraduate students in China receive financial support from their tutors, some from their universities or/and national funding institutions while some have part-time jobs. Most undergraduate income comes from their parents. Hence postgraduate total income and undergraduate income from their parents were considered to be their disposable income. In the total sample of 1747 students, 1642 indicated their disposable income and 3.2% had a monthly disposable income of less than 600 Yuan, 37.9% had between 600 and 1000 Yuan, around half (53.3%) between 1000 and 2000 Yuan, and 5.6% had more than 2000 Yuan.

To assess the respondents’ knowledge in waste separation, they were asked how familiar they were with standards relating to waste separation in Zhengzhou (Table 6).
Table 6 indicates that only 5.5% of the respondents were familiar with Zhengzhou’s waste separation standards, indicating college students’ relatively low levels of knowledge in waste separation.
Even though the overall level of knowledge in waste separation is low, the results indicate a significant relationship between college students’ knowledge of waste separation and their waste separation behaviour (p < 0.01); the better the knowledge the better the behaviour, a result which agrees with those of Meng [53] and Qu et al. [54]. This result, along with the overall low levels of waste separation knowledge among college students, highlights the importance of enhancing knowledge in SWM in order to improve people’s waste separation behaviour. Hence more effort needs be made by the local government and the university to promote the idea of waste separation, to raise awareness and to reinforce the implementation of Zhengzhou Measures among college students.
To further understand how equipped the students are with waste separation related knowledge, they were provided with a list of different kinds of waste and asked to put them in the right categories based on what is stated in Zhengzhou Measures (i.e., recyclable waste, kitchen waste, hazardous waste and other waste). Figure 3 presents the percentage of people who did it correctly.
Of the 1730 people who responded to this question, more than 70% could correctly separate textiles, tea leaves, floor sweepings, fruit residues, medicines, batteries, fish bone and paperboard. This implies that most college students in Zhengzhou have the basic knowledge of where the common waste should be placed. However, it is surprising that some make mistakes when categorizing common recyclables such as glass (with an accuracy rate of 45.4%), hazardous waste such as light tubes (with an accuracy rate of 42.1%), and other waste such as cigarette ends (with an accuracy rate of 36.3%) and napkins (with an accuracy rate of 29.5%).
The reasons for failing to correctly categorize these wastes are multiple. The first, as one of the interviewees pointed out, is the confusing categorization for the waste of items made of even the same material. For example, glass is in the category of ‘recyclable waste’ if it is intact i.e., glass bottles and jars, but ‘other waste’ if it is broken. The second reason is that some respondents based their judgement purely on where garbage was generated. For instance, napkins are mostly generated during meals so they are considered as ‘kitchen waste’ when in fact they are in the ‘other waste’ category. Finally, some respondents related the waste category to what they have known about the waste itself. For example, cigarette ends were regarded as hazardous waste by many because of a popular slogan ‘Smoking is harmful to health’ when they should be in the ‘other waste’ category. There is need to raise awareness of these categories and based upon the findings of the research special attention should be paid to napkins, cigarette ends, light tubes, and glass when distinguishing hazardous waste, recyclables and other waste.

This research was funded by the Department of Science and Technology of Henan Province, grant number: 202400410096.

We thank Xuecen Shen, Mengwei Li, Yang Lin, Qi Niu and Sheng Zhang from Henan Agricultural University for their help carrying out the fieldwork. Many thanks to each respondent for their time and patience filling out the questionnaire. 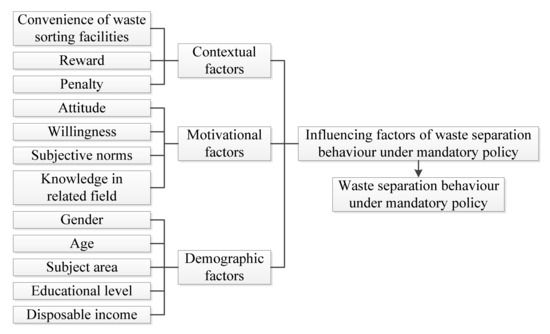 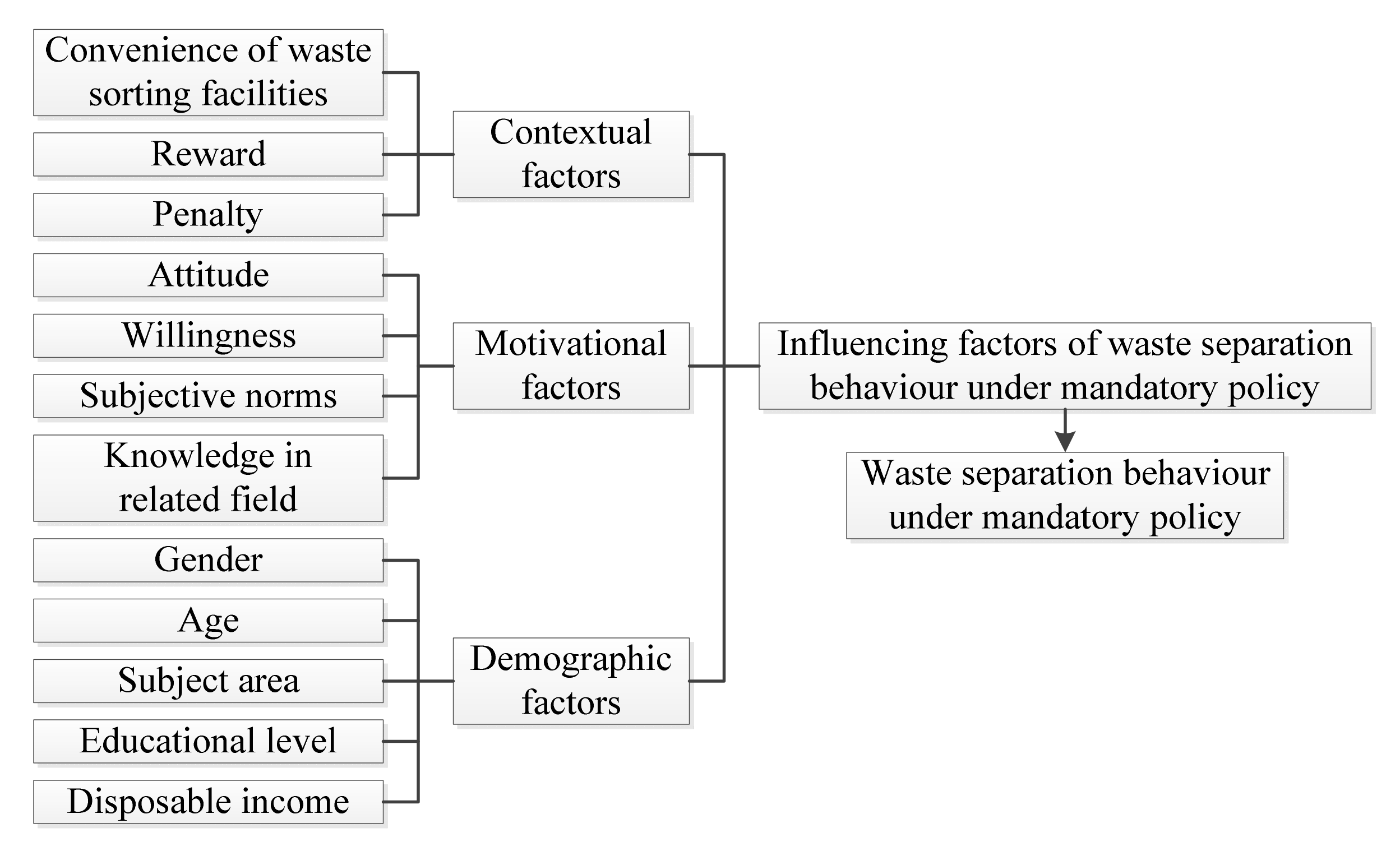 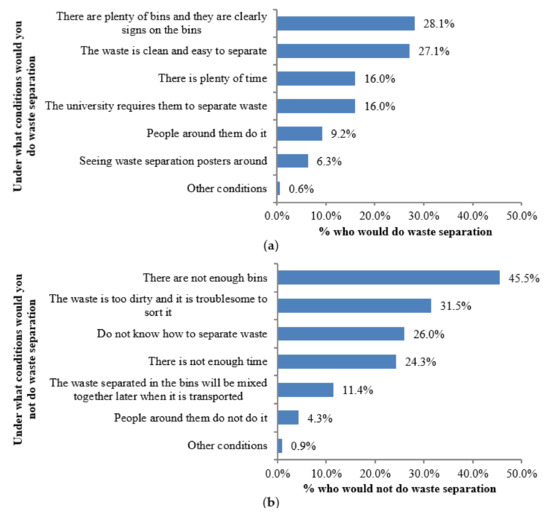 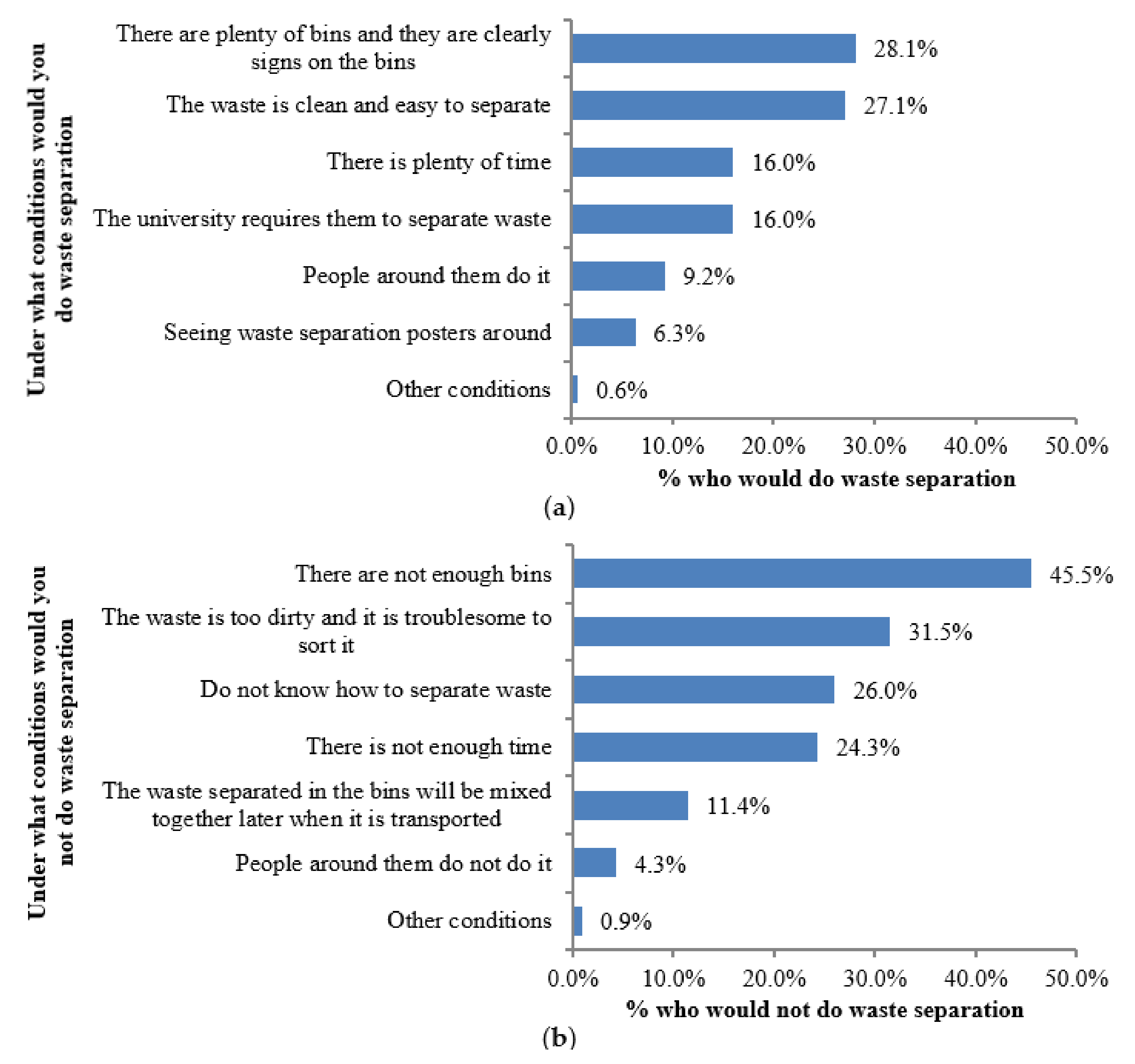 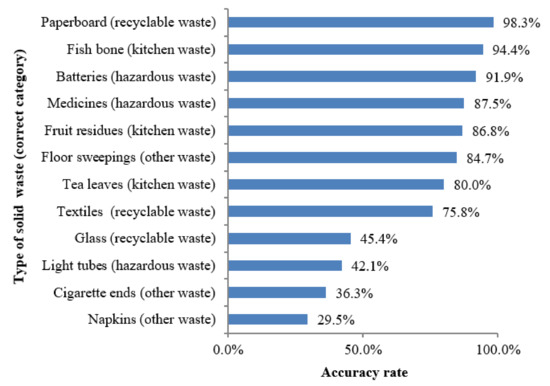 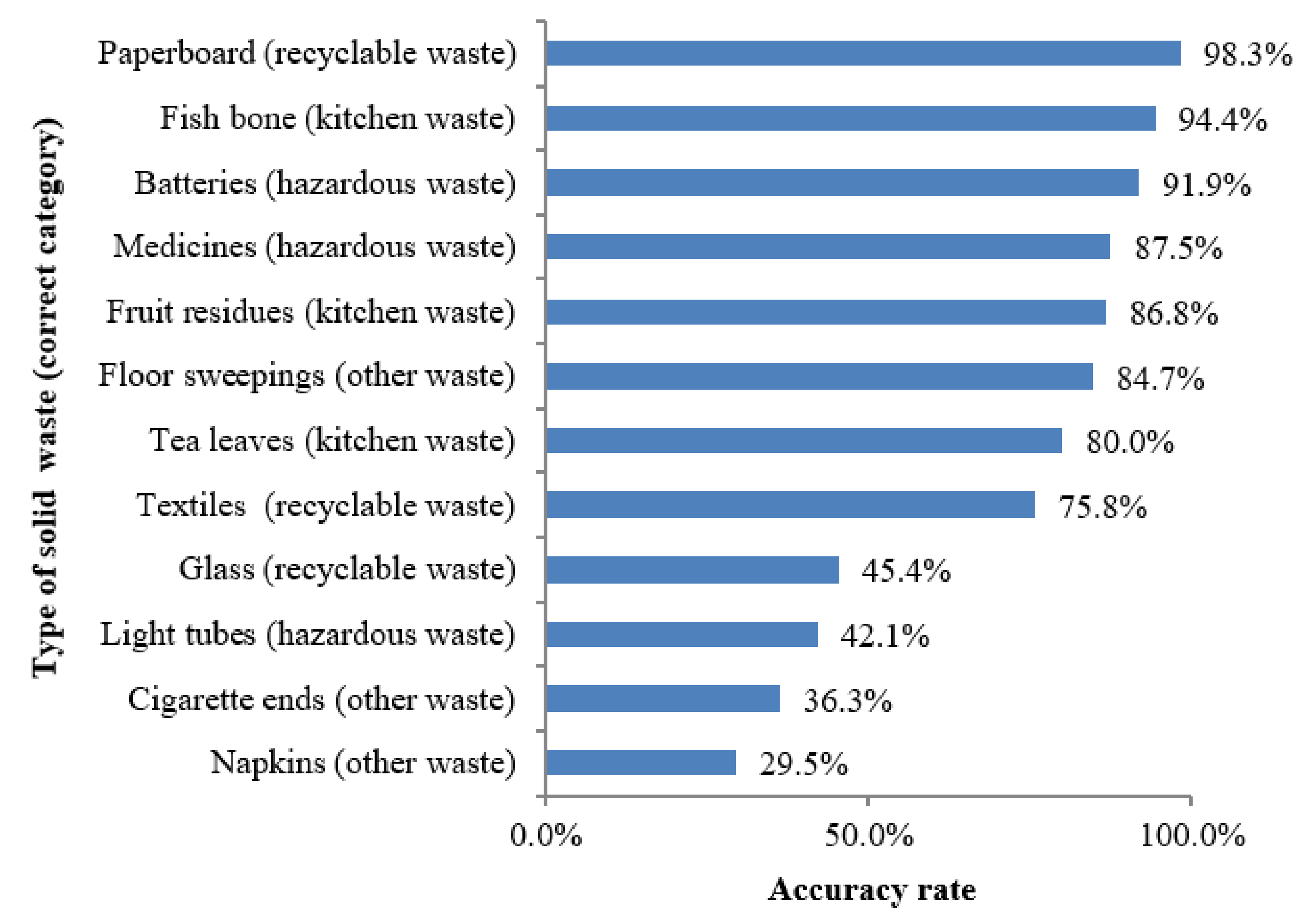