Is Parent Engagement with a Child Health Home-Based Record Associated with Parents Perceived Attitude towards Health Professionals and Satisfaction with the Record? A Cross-Sectional Survey of Parents in New South Wales, Australia

Prevalence and Barriers to Ending Female Genital Cutting: The Case of Afar and Amhara Regions of Ethiopia

Female genital cutting (FGC) remains highly prevalent in Ethiopia, in spite of a slowly decreasing trend over the last decade. In an effort to inform and strengthen FGC interventions in Ethiopia, this study aimed to assess FGC prevalence in cross-administrative border* districts and to explore barriers to ending FGC. A mixed methods, cross-sectional study was employed in three districts in the Afar and Amhara regions in Ethiopia. A sample of 408 women with female children under the age of 15 were included in the study. Additionally, 21 key informant interviews and three focus group discussions were held with local government officials and community stakeholders. The study found that the prevalence of FGC among mothers interviewed was 98%. Seventy-four percent of the female children of participants had undergone FGC. Of the youngest (last born) female children, 64.7% had experienced FGC. The participation of respondents in cross-administrative FGC practices ranged from 4% to 17%. Quantitative analysis found that knowledge and attitude towards FGC, level of literacy, place of residence, and religious denomination were associated with FGC practice. The study also found that the lack of participatory involvement of local women in programs that aim to end FGC and the lack of suitable legal penalties for those who practice FGC exacerbate the problem. A significant proportion of participants support the continuation of FGC practices in their communities. This finding indicates that FGC practice is likely to persist unless new approaches to intervention are implemented. It is recommended that a comprehensive response that couples community empowerment with strong enforcement of legislation is administered in order to effectively end FGC in Ethiopia by 2025, in alignment with the national plan against Harmful Traditional Practices. * Cross-administrative border means a border between two regional states in Ethiopia. In this document, it refers to the movement of people between Amhara and Afar regional states. View Full-Text
Keywords: female genital cutting barriers; socio-ecological model; cross-administrative border female genital cutting barriers; socio-ecological model; cross-administrative border
►▼ Show Figures 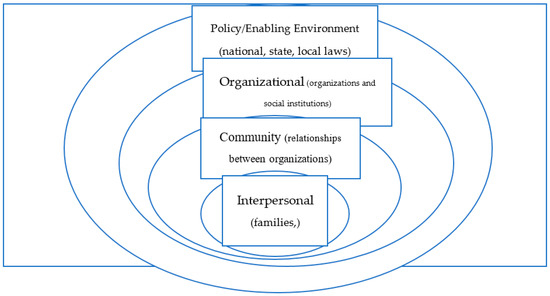