This study compared the effect of a resistance training (RT) program with machines, free weights, or a combination of both on changes in anthropometrics, strength, and functional ability in novice adult males. Thirty-six male novices in RT (18–45 years) followed a 10-week RT program. Participants were randomly assigned to one of three groups (N = 12 each): machines only; free weights only; or switching from machines to free weights (after 5 weeks). Muscle size (circumferences of upper arm, thigh and chest), strength (1 Repetition Maximum) on both machines and free weights, and functional ability (Functional Movement ScreenTM (Functional Movement Systems Inc., Chatham, VA, USA)) were assessed prior to the RT program, halfway at 5 weeks, and within one week after the final training bout. Repeated measures MANOVAs showed no significant time by RT group interactions for the different outcome measures. Regardless of RT group, significant improvements over time were observed for anthropometrics (F = 9.144, p < 0.001), strength (F = 6.918, p < 0.001), and functional ability (F = 25.578, p < 0.001). To conclude, similar gains in muscularity, strength, and functional ability can be expected for male novices in RT regardless of the equipment being used and without a fallback when changing from machines to free weights. Accordingly, any choice of RT equipment can be made, considering individual preferences. View Full-Text
Keywords: strength; exercise prescription; physical fitness; learning transfer; progression; untrained strength; exercise prescription; physical fitness; learning transfer; progression; untrained
►▼ Show Figures 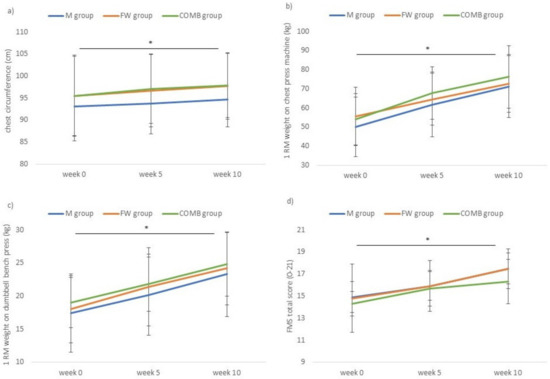