Waterpipe Use among Adolescents in Germany: Prevalence, Associated Consumer Characteristics, and Trends (German Health Interview and Examination Survey for Children and Adolescents, KiGGS)

:
Waterpipe (WP) use is popular among youth worldwide, but epidemiological data from Germany are scarce. We aimed to describe prevalence rates of WP use (current, last 12 months, ever) and analysed correlates and trends among 11- to 17-year-olds in Germany. Analyses were based on data from the “German Health Interview and Examination Survey for Children and Adolescents” study during 2014–2017 (n = 6599). Changes in WP use prevalence compared with 2009–2012 were used to describe trends. Associations with sociodemographic characteristics and cigarette smoking were assessed with multivariable logistic regression models. Prevalence of current WP use among adolescents was 8.5% (95% confidence interval (CI) = 7.5–9.6), use in the last 12 months was 19.7% (95% CI = 18.3–21.2), and ever use was 25.8% (95% CI = 24.2–27.5). High prevalence rates were particularly found among 16–17-year-olds. During 2009–2012, these prevalence rates were 9.0%, 18.5%, and 26.1%, respectively. WP use was associated with older age, male sex, migration background, lower educational level, and current smoking status. Among current WP users, 66.2% (95% CI = 60.0–71.9) identified themselves as non-smokers, and 38.1% (95% CI = 32.5–44.0) had used WP ≥ three times in the last month. WP consumption is popular among German youth, and prevalence rates have not changed over time. Specific prevention strategies to reduce harmful WP consumption among youth should be implemented.
Keywords:
KiGGS; waterpipe; shisha; smoking; Germany; adolescents

The KiGGS study is part of health monitoring conducted by the Robert Koch Institute (RKI) on behalf of the Federal Ministry of Health in Germany. KiGGS focusses on health status, health behavior, living conditions, protective and risk factors, and healthcare among children, adolescents, and young adults living in Germany. Cross-sectional data have been collected at three time points: the KiGGS baseline study (2003–2006), KiGGS Wave 1 (2009–2012) and KiGGS Wave 2 (2014–2017). The response rate (according to AAPOR response rate 2) of KiGGS Wave 2 was 40.1% in total [35]. A multi-step approach was used to include people with a migration background in KiGGS Wave 2. The share of children and adolescents of non-German nationality in KiGGS Wave 2 corresponds to the population figures from the Federal Statistical Office [36]. The concept, methodology, and analyses of KiGGS are described in detail elsewhere [35,37,38,39].
Comparable to the KiGGS baseline study, respondents for KiGGS Wave 2 were selected randomly based on the population registers of 167 representative German municipalities and cities (two steps sampling process). The study population of KiGGS Wave 1 consists of re-invited participants from the baseline study supplemented by newly invited children aged 0–6 years. KiGGS Wave 2 (like KiGGS baseline study) was comprised of an interview and examination part, whereas KiGGS Wave 1 was conducted as a telephone interview survey [37,38,39]. To achieve an optimal number of respondents and sample composition, a variety of measures were applied (e.g., phone calls or home visits) [35,36], resulting in a total of 15,023 respondents aged 0–17 years. The analyses of WP consumption were restricted to data from 11- to 17-year-old respondents (n = 6599), collected using a written questionnaire. To identify trends in comparison with the previous wave, the results from Wave 1 were compared with the currently collected prevalence rates from Wave 2. The study was approved by the ethics committee of Hannover Medical School (No. 2275-2014).

The prevalence of WP use was assessed with the question “Have you ever smoked a waterpipe or shisha?” Respondents who affirmed having used a WP were defined as “ever WP user” and were further asked “Have you smoked a waterpipe or shisha in the last 12 months?” (yes defined as “last-12-month WP user”) and “If you think about the last 30 days, on how many days did you smoke a waterpipe or shisha?” (response options: ≥1 day, defined as “current user” or “None in the past 30 days”). Regarding the frequency of use during the past month, we classified responses according to one, two, or ≥three times.
To determine the SES of the family, an index was generated based on information of the parents’ level of education, occupational status, and income (equivalized disposable income). Thus, respondents were classified as belonging to a family with “low”, “medium”, or “high” SES [40]. School type was surveyed by asking the parents “Which type of school does your child go to?”, with nine response options: “Primary school”, “Secondary school”, “Middle school”, “School with secondary and middle educational program”, “Integrated comprehensive school”, “Academic secondary school”, “Technical secondary school”, “Special school”, and “Other”. Due to its federal structure, there is no uniform school system in Germany. As some federal states now have a two-tier school system, we categorize for the following analyses, two groups for secondary school: “Secondary/Middle/Comprehensive school” and “Technical/Academic secondary school”. Young people who no longer attended school were assigned to the corresponding category based on the highest level of education they achieved [41].
To assess migration background, all respondents were asked about their own and their parents’ country of origin: “In which country were you born?” and “In which country were your parents born?” A one-sided migration background meant that one parent was not born in Germany or had no German citizenship; a both-sided migration background meant that the child himself/herself migrated to Germany and had at least one parent who was not born in Germany or both parents were born abroad [42].
To assess smoking status, respondents were asked “Do you currently smoke?”, with the following response options: “No”, “Daily”, “Several times a week”, “Once a week”, or “Less than once a week”. All respondents who answered in the affirmative were defined as a “current smoker”. The data collected for KiGGS Wave 2 are available from the RKI Research Data Center (https://www.rki.de/EN/Content/Health_Monitoring/Public_Use_Files/public_use_file_node.html).

The descriptive analyses of WP use patterns (current, last 12 months, ever) stratified by sociodemographic characteristics and smoking status are presented, differentiated for female and male respondents, as percentages with 95% confidence intervals (CIs). Weighting with regard to age, sex, federal state, German citizenship, and the child’s parents’ level of education was applied to ensure representative data for children and adolescents living in Germany. Comparison of current prevalence figures and those obtained between 2009 and 2012 was based on descriptive statistics and is presented as percentage with 95% CI. Three multivariable logistic regression models were applied to explore associations between different WP use patterns and sociodemographic characteristics and smoking status for girls and boys: model I = current WP use vs. never WP use, model II = last 12 month WP use vs. never WP use and model III = ever WP use vs. never WP use.
Respondents with missing data were excluded from the regression analyses. Data were analyzed using Stata 15.1 (Stata Corp., College Station, TX, USA). Stata’s survey procedures were applied to account for the clustered sampling design.

Older age, male sex, migration background, lower educational level, as well as current cigarette smoking were found to be associated with WP use among German adolescents. WP consumption is popular among adolescents but does not seem to have increased substantially in recent years. Continuous monitoring of trends in prevalence and use behavior is important to yield an evidence basis for developing targeted group-specific and gender-sensitive prevention approaches within public health prevention strategies. In addition to preventive programs within schools, it would be also useful to provide information about the health hazards and addiction of WP use in sports clubs or on preferred social networks (e.g., YouTube, Facebook, Twitter) visited by young people. A targeted gender-specific approach could also be made here. The law for the protection of youth, which has been adapted since 2016 and prohibits the sale of WPs by mail order to minors, is an important step to reduce the illegal sale to minors. A consistent and frequent age control in shisha bars should continue to be carried out by public authorities. Information campaigns (also for parents) may help to decrease the private use of WPs. The ban on marketing tobacco with characteristic flavors (e.g., menthol) implemented in Germany by § 5 of the Tobacco Products Act in 2020 is an important step to prevent young people from consuming flavored WP tobacco. A further ban on the advertising of tobacco products or combined warnings (consisting of pictures and text) are planned for WP tobacco in Germany from May 2024, which will help to increase the awareness about health hazards connected to WP use. Further research should explore why many adolescent WP users do not see themselves as smokers, that is, the beliefs and motives that underlie this. More research is needed on the consumption patterns (e.g., number of puffs, duration of a WP session) and on the type of WP use (e.g., types of WP tobacco, use of charcoal). Moreover, the association between the consumption of WP and other substances, e.g., cigarettes, should be investigated more in detail.

KiGGS was funded by the Federal Ministry of Health and the Robert Koch Institute.

We thank Analisa Avila, ELS, of Edanz Group (https://en-author-services.edanzgroup.com/ac) for editing a draft of this manuscript. 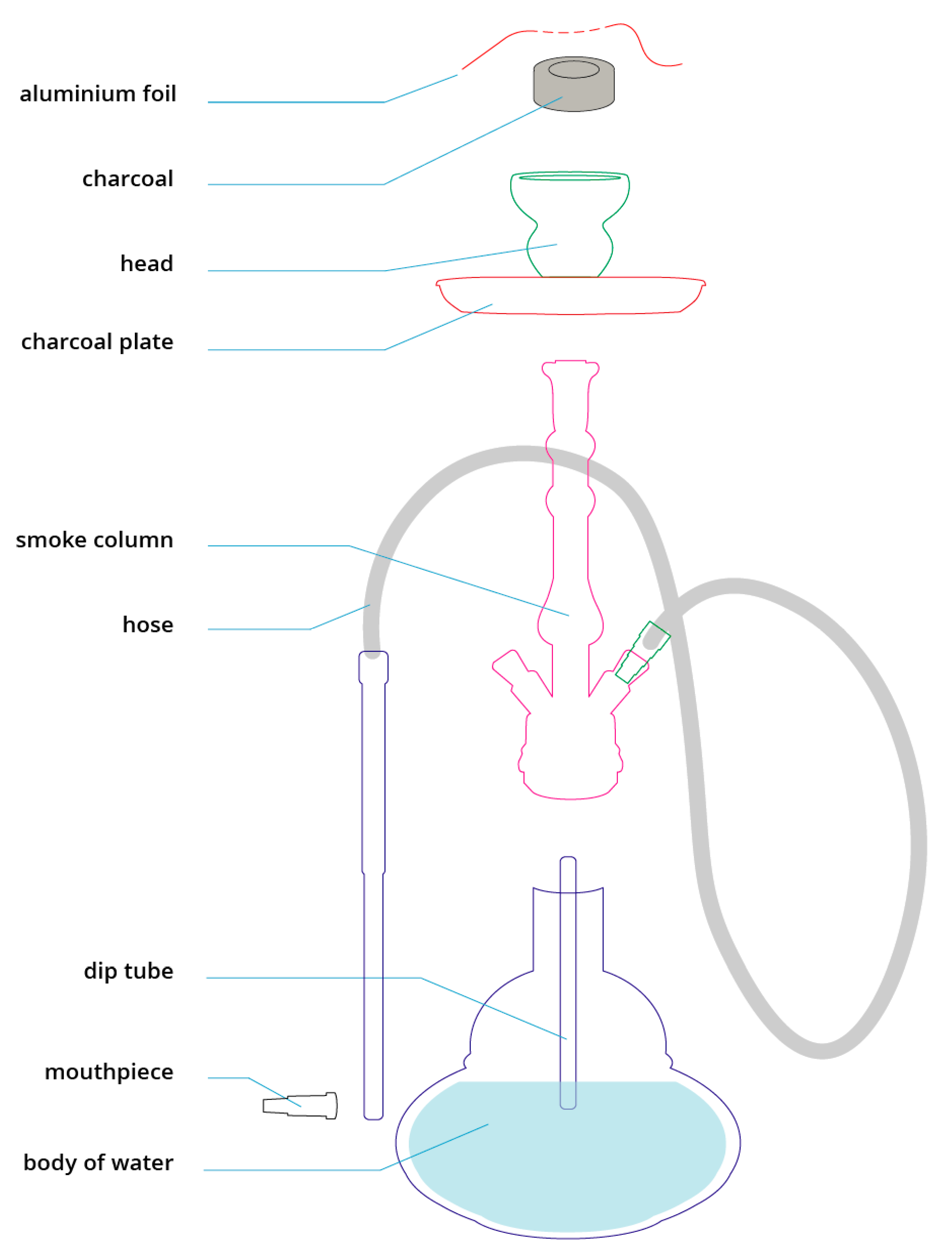