Important Difference between Occupational Hazard Exposure among Shift Workers and Other Workers; Comparing Workplace before and after 1980

Improving health and safety at work has been an important issue for the European Union since the 1980s. The existing literature supports that shift work is associated with multiple indicators of poor health but frequently neglects the potential impact of occupational hazards. This study aims at describing and comparing the exposure to different workplace hazards among shift and other workers before and after 1980. Exposure to different workplace hazards (noise, dust, pollutant, and other physical stressors) were analyzed among 119,413 participants from the UK Biobank cohort. After stratifying the analyses before and after 1980, exposure was compared between shift and other workers. Potential confounding variables (sex, age, ethnicity, education level, occupational category, and neuroticism) were adjusted for in the log-binomial regression. Shift workers had a higher prevalence ratio (PR) than other workers of being exposed to almost all identified hazards both before or after 1980. They were also more likely to be exposed to multiple hazards compared to other workers, both before 1980 (PR: 1.25; 95% CI: 1.21–1.30) and after 1980 (PR: 1.34; 95% CI: 1.30–1.38). The prevalence of all measured risk factors was higher after 1980 than before 1980 among shift workers. Of note, the work environment has improved overall for other workers. Our findings suggest that changes at the workplace have benefited other workers more than shift workers as they are still more exposed to all occupational hazards.
Keywords: shift work; occupational health; work environment; hazardous substances; pollutant; world disease; epidemiology shift work; occupational health; work environment; hazardous substances; pollutant; world disease; epidemiology

High occupational exposures to physically hazardous conditions are important risk factors for the development of non-communicable diseases [1,2,3,4]. Among these hazards, there are physical factors such as noise or extreme temperatures and exposure to chemical factors such as paints, asbestos, and pesticides that are known or suspected to be related to long-term diseases [5,6,7,8]. Monitoring exposures to different physical and chemical agents should be a priority, both for improving work conditions and health.
Over the last decade, significant changes have occurred in the work environment. Due to our modern 24-h society, the number of shift workers has drastically increased [9]. In European countries, shift work is undertaken by 17 percent of the active population [10]. Several findings throughout the literature review supported that shift work is associated with multiple indicators of poor health and well-being such as a higher rate of cognitive disturbances [11], cancer [12], obesity [13], diabetes [14], and cardiovascular diseases [15]. According to the literature, this association between shift work and poorer health could be explained through the disruption of the circadian rhythms, perhaps as a result of physiological and psychological maladaptation to chronically shifted patterns [16]. Yet, since the circadian cycle is known to affect sensitivity to different stressors, exposure to hazardous substances may be worse for “non-standard hour” workers [17]. However, only few studies investigated and controlled for exposure to occupational health hazards among shift workers (e.g., noise, heat, dust, as well as chemical exposure at work). Some research has reported that shift workers are both more sensitive and more exposed to different job-related stressors [18,19,20]. For example, Parkes et al. highlighted in a cohort of 1867 oil industry personnel that shift workers have an unfavorable perception of their workplace. This was in comparison to their daytime working colleagues in the three dimensions that form the basis of the demand-control-support model of work stress [20]. Bøggild et al. found in a random sample of 5940 employees that shift workers, more often than day workers, report higher exposure to heat, annoying noise, as well as walking or standing at work [18]. In addition, consistent with reported findings, Jay et al. reported recently on a cohort of 3003 New Zealanders that shift workers were not only more likely to be exposed to all types of workplace hazards, but also more likely to be exposed to multiple hazards at one time [19].
The hazardous exposure to shift workers is frequently neglected in studies and could potentially explain the higher rates of health disorders among this population. Considering this, larger population-based epidemiological studies, including the broad variety of industries, jobs, and exposure levels, are warranted to compare the work conditions of shift workers and other workers.
Regulations on workplace standards have changed since the beginning of the century in order to offer safer and healthier work environments for employees [21,22]. According to the European Parliament, improving health and safety at work has been an important issue for the European Union since the 1980s [23]. However, most of the study designs do not investigate the trends of working conditions over time. Indeed, as mentioned by Tynes et al., changing items in repeated surveys prohibits the analysis of trends over the years [24]. Assessing this evolution is critical since work conditions are known to be a determining factor for health. The UK Biobank cohort [25] afforded the opportunity to look deeper into workplace conditions including lifetime occupational histories among more than 100,000 participants born between 1936 and 1970. A new efficient and reliable web-based tool has been developed to assess job histories [26] that enable researchers to monitor general trends of the workplace after stratifying the analysis by time.
The present paper aims to describe and compare work conditions among shift and non-shift (i.e., “other”) workers. We provide descriptive data on the numbers of UK Biobank participants working shift in different occupational categories and frequency of exposure to different risk factors. We also evaluate the trends of working conditions by comparing risk exposure before and after 1980.

We undertook analyses among 119,413 participants distributed in two groups according to the year job ended, either before or after 1980. The percentage of shift workers was 11.4% (n = 6800) in the first period and 17.5% (n = 10,439) in the second one. Mean age of the participants at the recruitment were respectively 59.6 (±5.4) and 52.6 (±8.0) years. Study descriptions and distribution in the different job categories are provided in Table 1. As illustrated in Figure 1, the percentage of shift workers increased in each job category after 1980, with a higher increase being found among “Process, Plant, and Machine Operatives” (+21%), followed by “Skilled Trades Occupations” (+14.2%) and the “Elementary Occupations” (+11.2%). The distribution of shift work across the different job categories highlighted “Administrative and Secretarial Occupations”, “Sales and Customer Service Occupation” and “Professional Occupation” as the sectors with the lowest numbers of people working shift.

3.1.1. Comparison between Shift and Other Workers

Among the shift workers, the prevalence of being exposed to noise, cold, hot, dust, chemical or other fumes, pesticides, and diesel exhaust were significantly higher after 1980 comparing before 1980 (Table 3 and Figure 3A). Exposure to paint/thinner/glue and asbestos were unchanged, whereas exposure to passive smoking was significantly reduced. After Bonferroni adjustment, dust exposure was not significantly different anymore (p = 0.019).
Among the other workers, the prevalence for noise, cold, and hot were increased, whereas exposure to dust: 0.94 [0.92–0.97]; chemical or other fumes: 0.78 [0.75–0.81]; smoke from other people smoking: 0.79 [0.78–0.80]; asbestos 0.94 [0.89–0.99]; and diesel exhaust: 0.88 [0.83–0.93] were decreased. There were no statistically significant differences among prevalence for paints/thinners or glues and pesticides exposure for other workers after 1980 (Table 3 and Figure 3B). After Bonferroni adjustment, asbestos exposure was not significantly different anymore (p = 0.015).

Further adjustment for the neuroticism trait is reported in the sensitivity analyses. Table S2 allows comparison between shift and other workers stratifying for job period. In line with the main analyses, we found that before 1980, participants working shift were more likely to be exposed to all hazardous conditions than other workers, except pesticides and smoke from other people smoking. After 1980, participants working shift had statistically significant higher prevalence than other workers of being exposed to each of the reported workplace hazards. Table S3 highlights changes over time in each group. Similar to the main analyses, among the shift workers, all the risk factors were significantly more prevalent after 1980 comparing before 1980, except smoke and paint/thinner or glue exposure. Among the other workers, the prevalence for noise, cold, hot, and paints/thinners or glues exposure were increased, whereas exposure to dust, chemical or other fumes, smoke from other people smoking, asbestos, and diesel exhaust were decreased.

Availability of Data and Materials

All data supporting this study is openly available from the UK Biobank (https://www.ukbiobank.ac.uk/).

Ethics Approval and Consent to Participate 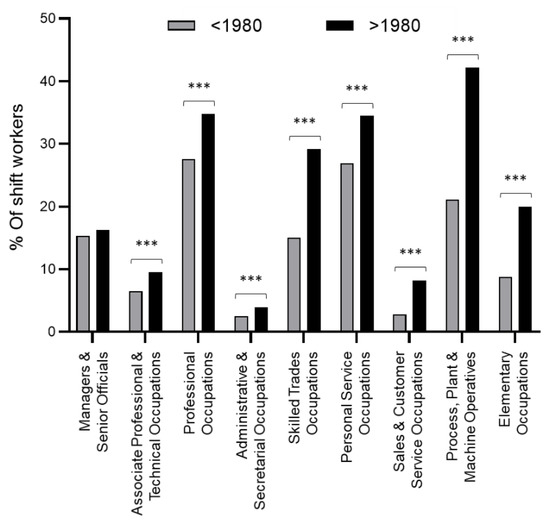 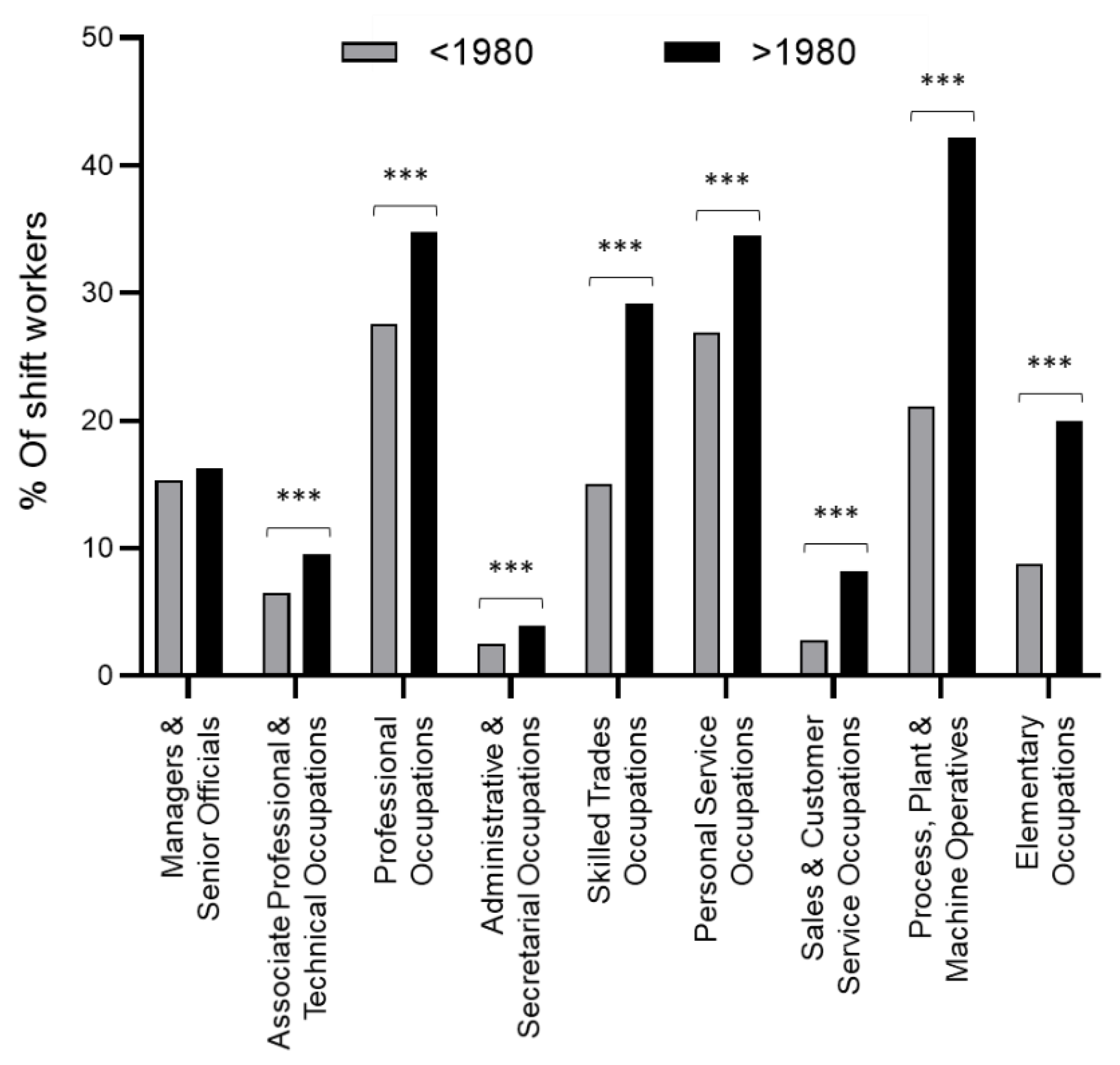 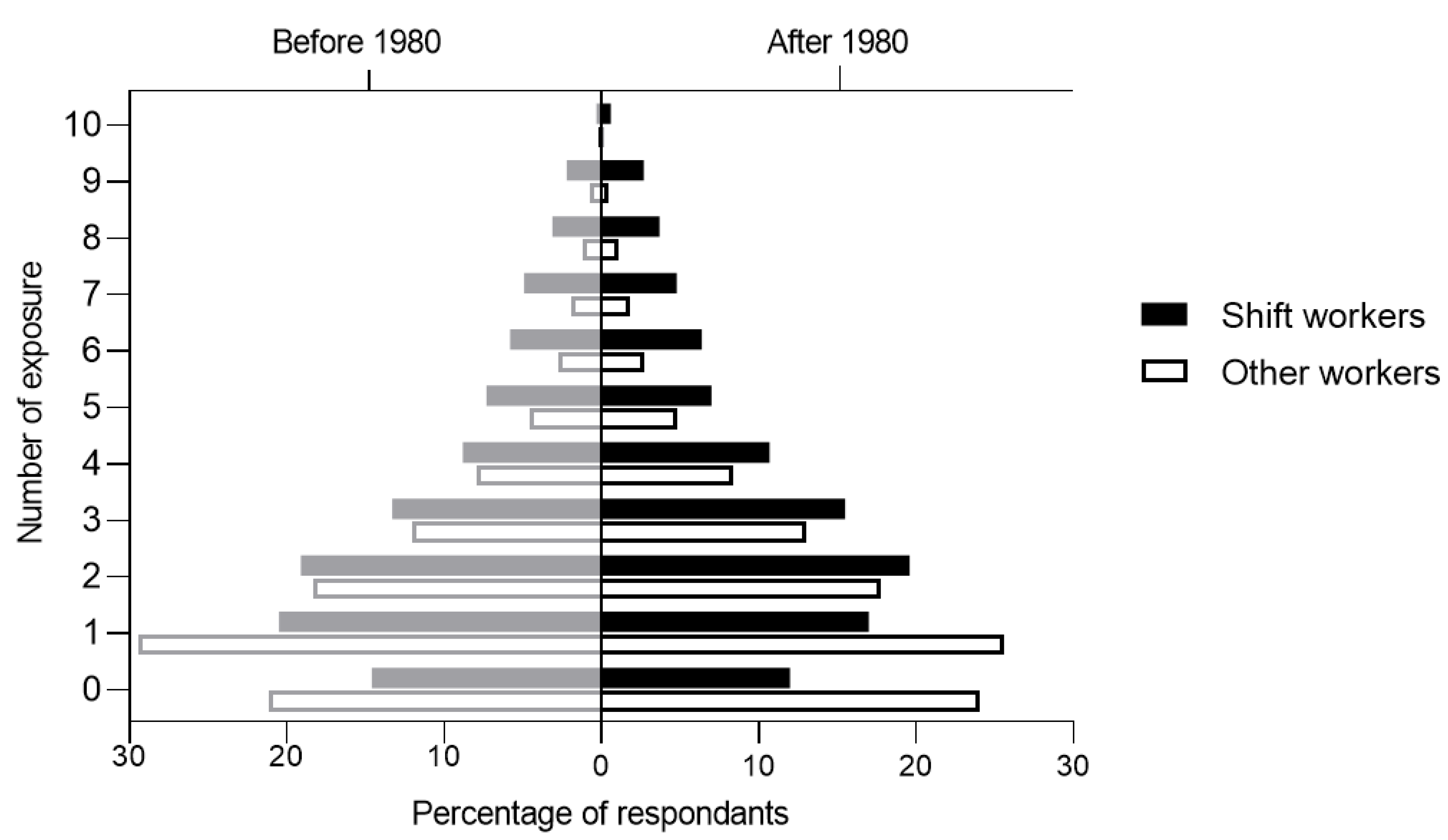