:
Propolis is a potent anti-microbial and natural anti-inflammatory by-product obtained from the beehive. Studies have demonstrated the superior biocompatibility and anti-microbial properties of propolis as compared to calcium hydroxide. However, its effect on postoperative endodontic pain is unknown. Therefore, this study aimed to investigate the impact of Chinese propolis paste as an intracanal medicament on postoperative endodontic pain intensities compared with calcium hydroxide (control) at different time intervals in necrotic teeth with periapical radiolucency. Eighty patients with single-rooted necrotic teeth with visible periapical radiolucency were recruited and randomly allocated to either the calcium hydroxide or propolis groups. After chemo-mechanical preparation and intracanal medicament insertion, patients were given the VAS (visual analogue scale) to record pain scores. Inter-group data were compared and analyzed using two-way repeated measure ANOVA (Bonferroni test). A p-value of < 0.025 was considered significant. In total, >78% of the patients experienced no or only mild post-operative pain in both the groups at all time intervals, without any significant difference in pain scores between the two groups (p > 0.025). An overall flare-up rate of 14.8% was found. The results suggest that either of these medicaments can be used as an inter-appointment medication for the prevention of postoperative pain in necrotic cases.
Keywords:
calcium hydroxide; propolis; postoperative pain; natural product; clinical trial

Pain is a common occurrence after endodontic treatment. Up to 40% of patients may experience some level of post-operative endodontic pain [1]. It is especially disturbing when the pain is initiated, or its intensity increases sharply after endodontic treatment. In the literature, such acute exacerbation of pain is coined a “flare-up” [2]. The rate of flare-up varies from 1.5% to 12.3% [3,4,5,6]. The etiology of postoperative pain is multifactorial and complex. It is related to iatrogenic and microbial factors. These factors cause irritation or injury to peri-radicular tissues. The extrusion of microbes and their byproducts from apical foramen during root canal preparation is the primary reason for the occurrence of severe post-instrumentation pain [7]. Therefore, to prevent such an undesirable situation, the operator should implement an effective anti-microbial strategy based on chemo-mechanical preparation along with the placement of inter-appointment intracanal medicaments, especially in infected cases.
Antimicrobial intracanal medicaments are considered as a method of disinfection of the root canal system [8]. In addition to antimicrobial effectiveness, the ideal intracanal medicament must possess an ability to prevent post-operative pain [9]. Calcium hydroxide is the most widely used anti-microbial intracanal medicament to which other medicaments are commonly compared to in the literature [10]. It has also been suggested that calcium hydroxide possess pain-relieving properties due to its antibacterial action and tissue-altering effects [11].
Recently, the focus of research has shifted towards finding natural alternatives to synthetic medications. Several natural products have been tested as intracanal medicaments for this purpose, namely: Liquorice extract, propolis, Morinda controflia, and the extract of Arctium lappa [12]. Propolis is a natural, biocompatible, and resinous byproduct, which has been used extensively as an organic medicine for managing oral and throat infection, dental caries, skin wounds, burns, leg ulcers, psoriasis, atopic dermatitis, recurrent aphthous ulcers, warts, herpes labialis, herpes genitalis, wound healing, tissue regeneration, and as a diet supplement [13]. Moreover, studies suggest that it can be used to prevent and treat the cases of oral mucositis induced due to cancer therapy [14] and to control diabetes and obesity complications [15]. It is prepared from substances collected from different parts of plants and deposited into a beehive by honey bees (Apis mellifera L.) [13]. It possesses anti-microbial and anti-inflammatory properties due to the presence of flavonoids. Moreover, the anti-microbial properties of propolis have been proven to be superior to calcium hydroxide in vitro [16,17]. Similarly, two clinical studies have found propolis to be superior to calcium hydroxide when used as a direct pulp capping agent and as an intracanal irrigant [18,19].
The mechanism by which propolis induces its anti-inflammatory and analgesic action is through the suppression of the lipopolysaccharide-induced inflammatory response of key cells [20]. Because of the potent anti-microbial and anti-inflammatory properties, propolis was expected to reduce the occurrence and intensity of inter-appointment pain. Therefore, the aim of the current trial was to compare the effect of propolis (paste) with calcium hydroxide paste on postoperative endodontic pain intensity in necrotic teeth with periapical pathosis at different time intervals. The null hypothesis was that there would be no difference in the pain severity between the two medicament groups.

In the literature, several methods have been described for the prevention of post-instrumentation pain. It includes the usage of the instrumentation technique that extrudes less debris, for instance, the crown-down technique with copious and frequent irrigation [25]; persistence of strict aseptic chain during all intracanal procedures [7]; anti-inflammatory drugs [26]; and intracanal medicaments [4,10,22]. Placing intracanal medicaments is one of the most conservative methods for reducing the microbial load and incidence of interappointment pain. In vitro studies regarding the anti-microbial [16,27,28], anti-inflammatory [29,30], and biocompatibility [31] properties along with other benefits of propolis due to its antioxidant effects have shown immense potential [32]. However, the effect of propolis on post-instrumentation pain was unknown.
In the present study, necrotic teeth with periapical pathosis were specifically chosen for the study because intracanal medicaments are highly recommended in such teeth [33]. Single-rooted teeth were selected in this study to minimize iatrogenic errors as they are relatively easier to treat. Cases with symptomatic periapical periodontitis, with the presence of any level of pain on percussion (pain score = 1 to 100) were chosen because of its increased potential to cause postoperative pain [34]. The limited age range (20–40) was selected to limit the difference in pain perception due to differing ages [35]. The root canal preparation was carried out in a crown-down manner to limit the extrusion of debris and irrigant solution from the apex [25]. VAS was used to record pain because it is secure, reliable, and a frequently used subjective pain tool for the measurement of pain [4,36].
Overall, there was a continuous reduction of inter-appointment pain as time elapsed. However, the inter-group comparison revealed that pain intensities did not significantly differ between the two groups at any time interval. This is because most of the patients (>78%) experienced no or only mild inter-appointment pain (pain score <25) in both the medicament groups at all time intervals, which is in accordance with the results of a previous study. Additionally, the previous study also reported an insignificant difference in post-operative pain between the different intracanal medicament groups. However, due to the low incidence of inter-appointment pain, the authors recommended the use of either of those medicaments routinely [10]. The current result accepted the null hypothesis of the study.
The flare-up rate varies widely in the literature due to differences in the variables studied, and the methods used to characterize flare-up [3,4,6,37]. In the present study, a definition proposed by Ehrmann et al. was used to identify flare-up because of its well-defined criteria. The overall incidence of flare-up was found to be 14.8%, which was lower than the flare-up rate reported by Ehrmann et al. (19%) using the same definition. However, most of the flare-up cases in their study belonged to the no-treatment control group [4]. Although there was an increase of 20 or more points on the VAS scale, most of these patients fell only in the moderate pain intensity group (pain score <50). Nine out of 10 flare-up patients experienced moderate pain for which they consumed over-the-counter oral analgesic for pain relief. According to the definition proposed by the American Association of Endodontists, a flare-up is an acute exacerbation of pain [2]. The aim of the current definition of flare-up used in the study was to detect such acute exacerbation by giving it a numerical value. All the cases of flare-up, severe pain, and most cases of moderate pain quality occurred within 24 h post-operatively, which is in accordance with the literature [4,5,11,22]. This may be due to the slow action of these medicaments [23]. Interestingly, all the patients who experienced severe pain belonged to the calcium hydroxide group. However, their numbers were low.
One possible limitation of this study was the absence of spontaneous pain. The presence of pre-operative spontaneous pain is a predictive factor for postoperative pain [38]. However, in completely necrotic teeth, such pain is technically not possible. Another limitation of our study was the absence of the no-treatment group, which could have shown the difference between medicaments and no-medicament groups.

Based on the findings, it can be concluded that there was no statistically significant difference in post-operative pain between calcium hydroxide and propolis groups. However, as the effect of propolis was observed to be similar to the calcium hydroxide group on postoperative endodontic pain without any adverse effects, it can be recommended for use as an intracanal medicament in necrotic cases. Additionally, in the future, a similar clinical trial is needed for a comparison of propolis with the no-treatment group, and other medicament groups. 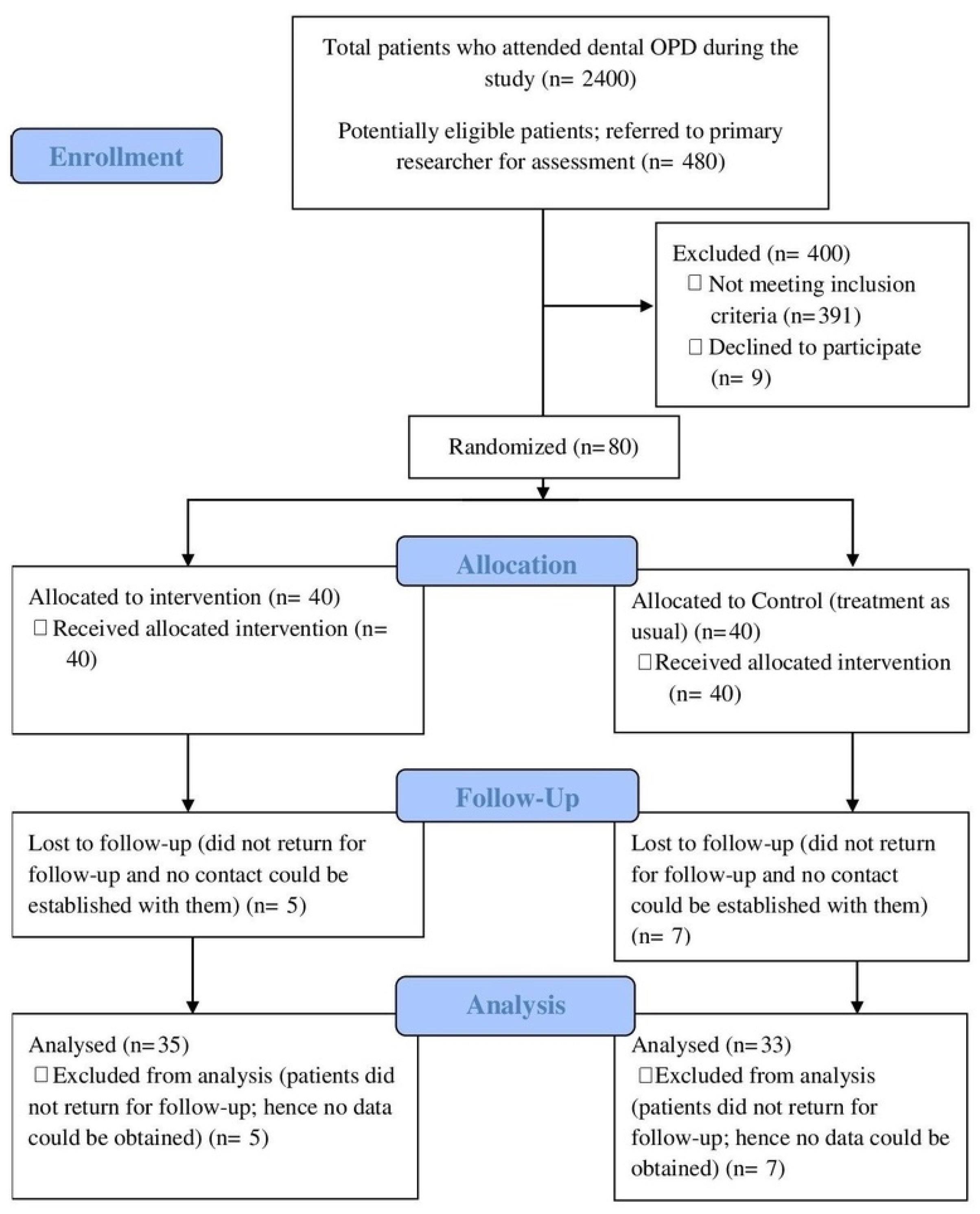 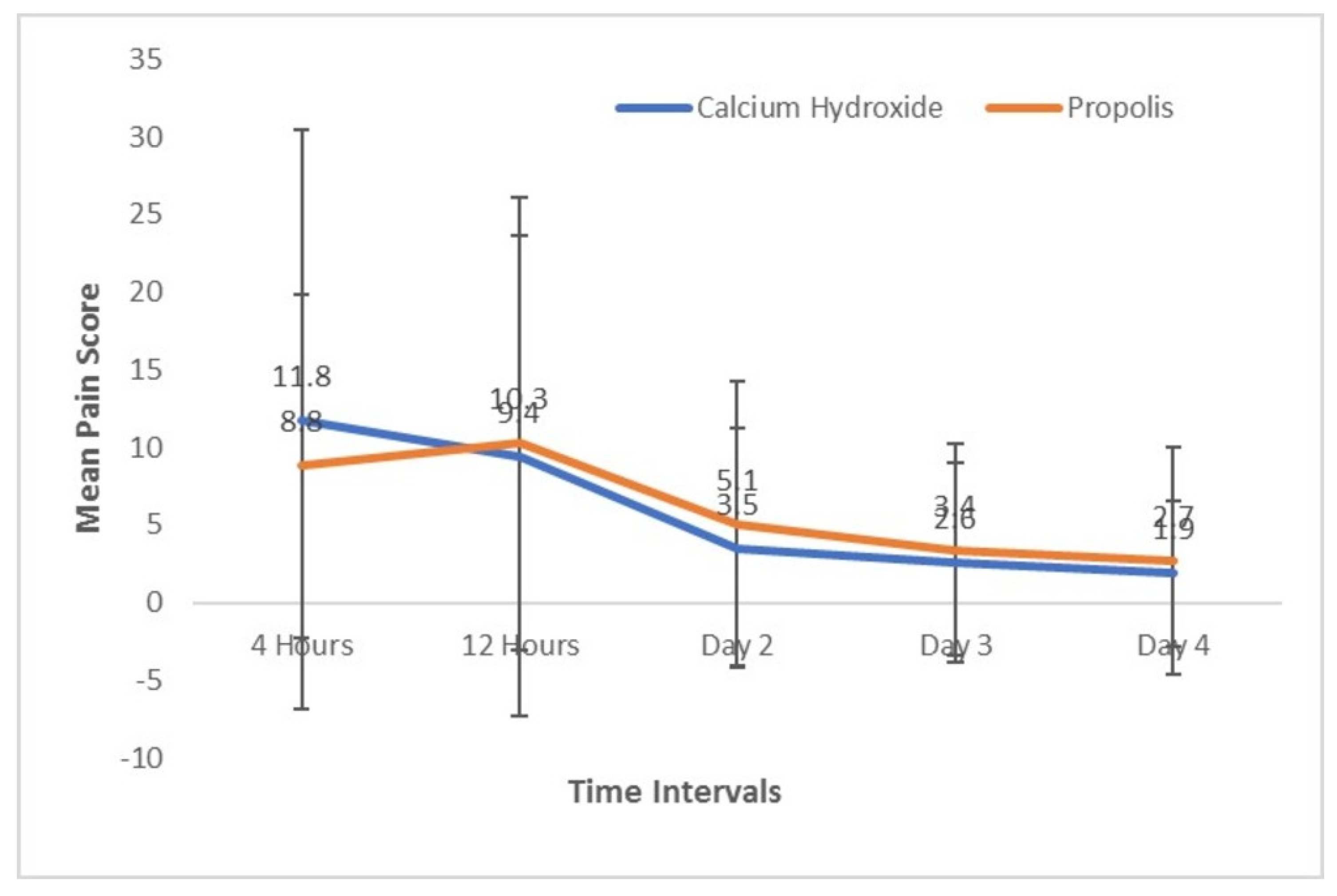