ZanzaMapp: A Scalable Citizen Science Tool to Monitor Perception of Mosquito Abundance and Nuisance in Italy and Beyond
Previous Article in Journal

Mapping the Potential Distribution of Major Tick Species in China

Aedes albopictus is an invasive mosquito that has colonized several European countries as well as Portugal, where it was detected for the first time in 2017. To increase the knowledge of Ae. albopictus population dynamics, a survey was carried out in the municipality of Loulé, Algarve, a Southern temperate region of Portugal, throughout 2019, with Biogents Sentinel traps (BGS traps) and ovitraps. More than 19,000 eggs and 400 adults were identified from May 9 (week 19) and December 16 (week 50). A positive correlation between the number of females captured in the BGS traps and the number of eggs collected in ovitraps was found. The start of activity of A. albopictus in May corresponded to an average minimum temperature above 13.0 °C and an average maximum temperature of 26.2 °C. The abundance peak of this A. albopictus population was identified from September to November. The positive effect of temperature on the seasonal activity of the adult population observed highlight the importance of climate change in affecting the occurrence, abundance, and distribution patterns of this species. The continuously monitoring activities currently ongoing point to an established population of A. albopictus in Loulé, Algarve, in a dispersion process to other regions of Portugal and raises concern for future outbreaks of mosquito-borne diseases associated with this invasive mosquito species. View Full-Text
Keywords: Aedes albopictus; invasive mosquitoes; population dynamics; arboviruses; Portugal Aedes albopictus; invasive mosquitoes; population dynamics; arboviruses; Portugal
►▼ Show Figures 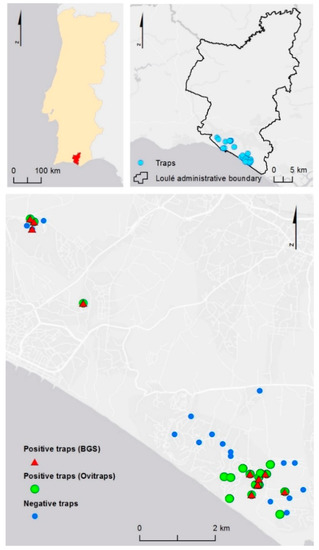