Exploring Influential Factors Including COVID-19 on Green Food Purchase Intentions and the Intention–Behaviour Gap: A Qualitative Study among Consumers in a Chinese Context
Previous Article in Journal

The Impact of COVID-19 Crisis upon the Consumer Buying Behavior of Fresh Vegetables Directly from Local Producers. Case Study: The Quarantined Area of Suceava County, Romania

Purchase intention and WTP for carbon-labeled products have garnered considerable scholarly attention [30,31]. Vanclay et al. [32] used green, yellow, and black labels to indicate low, normal, and high carbon emissions, respectively, of a product. The authors found that green-labeled products witnessed a 4% increase in sales volume over three months, whereas black-labeled ones experienced a 6% decrease, implying that carbon labeling contributes to low-carbon consumption behaviors. Cohen and Vandenbergh [33] and Hornibrook et al. [34] confirmed that carbon labeling increases direct consumer demand for low-carbon products. However, many studies have argued that existing carbon-labeling schemes did not provide sufficient, meaningful information to consumers, which may complicate consumers’ decision making. For example, consumers found that it is difficult, though not impossible, to perceive the carbon emissions value that the label shows [35,36,37].
Prior studies noted that it is essential to improve transparency in carbon-labeling schemes to facilitate better communication with consumers. Feldmann and Hamm [38] revealed that consumers wanted to know more about products, which requires carbon labeling to address the necessity for product information. The authors further found that consumers are willing to pay for products with price premiums that display more information. Hartikainen et al. [39] posited that consumers had comparatively high preferences if carbon labels allowed comparisons. This was verified by Emberger-Klein and Menrad [40] and Feucht and Zander [7], who indicated that a detailed explanation of labeling improvement was effective in stimulating consumers to purchase carbon-labeled products. Consumers used the label to learn about the sources of products and preferred those with a more environmentally friendly production process [41].
Prior studies also focused on whether consumers are indifferent to carbon-labeled products, as the carbon label itself is limited in providing direct individual utility [42,43]. Borin et al. [44] identified consumers’ primary preference for product quality and value rather than labeling environmental information. Guenther et al. [45] argued that investigating consumers’ behavior related to carbon-labeled products is of paramount importance because it helps consumers understand possible behavioral changes in terms of purchase intention and WTP and identify the factors influencing the shift to low-carbon purchasing behaviors.

2.2. Method for Investigation of Consumer Behavior in Carbon-Labeled Products

Previous studies devoted to exploring the influencing factors involved in the purchase intention and WTP for carbon-labeled products are mainly empirical and mainly used research methods of the face-to-face interview and online or offline questionnaire [46,47]. Echeverría et al. [14] designed an open questionnaire to investigate Chilean consumers’ WTP for carbon-labeled products. Li et al. [48] collected 1142 questionnaire surveys in Jiangsu Province, China, and developed logistic regression models to identify the main factors that impact consumers’ willingness to buy low-carbon products. Zhao et al. [13] conducted a large-scale questionnaire survey in Chengdu, China, to collect data on consumers’ perception of and purchase intention and WTP for carbon-labeled products. Based on 1132 valid questionnaires, they calibrated logistic regression and ordered logistic regression models to determine the correlates of the three variables concerned. Based on data from a questionnaire survey in Hong Kong, Wong et al. [15] estimated a structural equation model to reveal the association between consumer perceptions of beverage carbon footprints and carbon labels and a series of factors such as gender, age, and education attainment.
Apart from the most commonly used research methods described above, focus group discussions are used in some studies. For example, Upham et al. [30] applied a focus group discussion method to review people’s attitudes toward carbon labeling in grocery products and discussed potential factors that influence their purchasing motivations. Guenther et al. [45] employed focus group surveys to distinguish attitudes toward carbon-labeled products between consumers in the United Kingdom and Japan.
Behavioral experiments have been conducted by a handful of researchers in studying carbon label-related behaviors. Shuai et al. [23] conducted a carbon-labeling scenario experiment in six Chinese cities and concluded that consumers with different socio-demographic characteristics have varying WTP for low-carbon products; and that education level and monthly income are positively related to the WTP. Vecchio and Annunziata [49] carried out an auction experiment in the University of Naples and developed logistic regression models to assess price premiums for food products (more specifically, chocolate bars) with sustainability labels, including fair-trade labels, biodiversity labels, and carbon labels.

The existing literature primarily focuses on either carbon label-related behaviors of the general population or the variances of different groups’ behaviors. It has scarcely looked at a subgroup. Comparatively, this study exclusively centers on university students in China (a big group of future low-carbon consumers in the biggest carbon emitter) and examines their purchase decision-making regarding carbon-labeled and non-carbon-labeled products. It provides theoretical and empirical support to develop low-carbon consumption behaviors.
Methodically, the majority of prior studies used a single experiment to examine carbon label-related behaviors and have seldom integrated different experimental methods. Undeniably, each experiment method has its advantages and disadvantages. The combined use of two or more methods helps maximize strengths and minimize drawbacks, eventually reaching more persuasive conclusions.

Figure 1 illustrates the roadmap of this study.

The experimental group includes 282 students from Southwest Jiaotong University in Chengdu, China, who selected the module “Environmental Protection and Sustainable Development” in the academic year 2015–2016. These students were interested in sustainable development and expressed a keen environmental consciousness. The module was simultaneously offered in four classes in the same academic year. The experimental class was selected using the single-attribute complete randomization, as Table 1 illustrates.
Twenty-four students who chose the class with the smallest random number (curricular number: B3709) were selected to form four focus groups for a semi-structured interview. The semi-structured interview was based on a predetermined set of open questions (see Table 2) and helped obtain the necessary information in a short period [29,50,51,52,53,54,55]. The selection of questions was predominately informed by existing literature on carbon labeling and environmental sustainability (e.g., [13]). The moderator controlled the field procedure during the one-hour seminar and asked the student respondents various questions about carbon-labeled products for their group discussion. Subsequently, the discussion results were applied in subsequent milk auction.

Students in the class with the largest random number (curricular number: B2133) were chosen as bidders. The entry of the experiment was fully voluntary. Anyone willing to participate was included in the experimental group. Before conducting the experiment, essential requirements were informed, including research aim, duration, procedure, and ethics. The willingness to participate in environmental sustainability research is observed to be rooted in the students’ mindsets. Finally, fifty participants were recruited, as the other ten students exited the auction experiment for personal reasons. The participants were randomly assigned into three groups (numbered as 1, 2, and 3, respectively).
The auction experiment took into account four crucial variables identified in focus group discussions: taste, nutritional components, packaging, and carbon-labeling information. As such, the auctioned products were chosen as (1) 250 mL box-packed pure milk, (2) 243 mL box-packed chocolate milk, (3) 250 mL box-packed high-calcium and low-fat milk, and (4) 240 mL bagged pure milk. Both carbon-labeled and non-carbon-labeled products were auctioned. The information on milk carbon emissions can be found in Zhao et al. [28,35].
As formerly noted, fifty students acted as the bidders (purchasers), while the course lecturer served as the auctioneer. A bidding price range was predetermined, in which milk products’ market prices were used as the price mean and five price levels were set above and below the mean, respectively. Therefore, each type of milk product experienced ten rounds of bidding. In each round of auction, the price increases by 0.1 Chinese Yuan (CNY). Every time the auctioneer quoted a price, the bidders were given seven seconds to decide whether to bid. If they were willing to bid, they could raise their hands. To mitigate the possible interference of social reactions on individual decision making, we asked all participants to respond simultaneously. In such a case, each respondent does not have enough time to interact with others, so the interactive influence can be properly controlled. If a bidder did not participate in a round of bidding, he or she could participate in other rounds. When the bidding prices reached the predetermined ceiling price, the auction was declared as complete.
Multi-round auctions may result in the affiliation effect. In other words, in multi-round auctions, if some bidders discover others’ overbidding, they will follow others to push prices up. Consequently, the final price may deviate from the products’ actual value. Therefore, this study only employed a one-round auction.

This study conducted a field consumption experiment to verify the auction’s experimental results and explore university students’ consumption behaviors influenced by the price differentials between the carbon-labeled and the non-carbon-labeled milk. A small shop on the campus was rented to sell three types of common milk products with the same brand (huorun), which differed in price, packaging, and taste. Both carbon-labeled and non-carbon-labeled products were sold. Thus, six samples of milk products were selected, marked as A, a; B, b; and C, c, respectively, as Figure 2 demonstrates.
However, as China has no carbon-labeling scheme, a self-designed carbon label was marked on the milk package. Our self-designed carbon label has a “CO2” shape (Figure 3). The “O” is replaced by a leaf, signifying low carbon, environmental friendliness, and nature. The figure at the upper-right corner of the carbon label indicates the carbon emissions across the product’s lifecycle. This study estimated its emissions to be approximately 200 g for carbon-labeled products, due to the time and cost restrictions on the experimental milk’s carbon emissions throughout its lifecycle, according to previous studies [28,56].
The sale’s target group involved 208 (= 67 + 88 + 60 + 67 − 24 − 50) students in the four experimental classes who did not participate in the focus group discussions and the auction experiment. Sixteen students were unwilling to join, and the other 192 were finally engaged in the selling experiment. Each student joining the experiment received one cash coupon with his or her student ID, which allowed them to purchase one specific type of milk product once. After a student bought a milk product, his or her cash coupon would be collected.
The selling experiment was implemented in three consecutive weeks, and one week corresponds to one period. This study designed three price premium levels based on prior studies on the price premiums of the carbon-labeled milk, as Table 3 notes [12].

Data collected in the auction experiment were first analyzed using descriptive statistics and an independent-sample t-test in the SPSS 19.0 software (IBM Corporation, Armonk, NY, USA) to investigate whether and how the carbon label impacted the bidders. The experimental data were further subject to a partial correlation analysis to identify the correlation between each control variable and the percentage of bidders.

The authors are grateful to the three reviewers for their helpful comments. 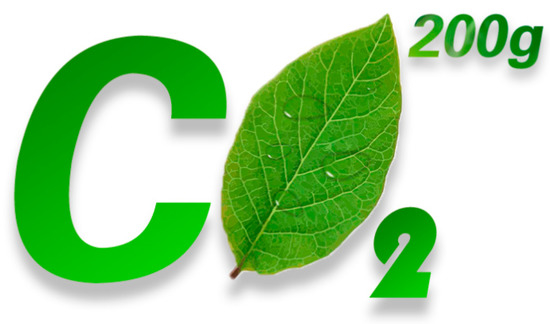 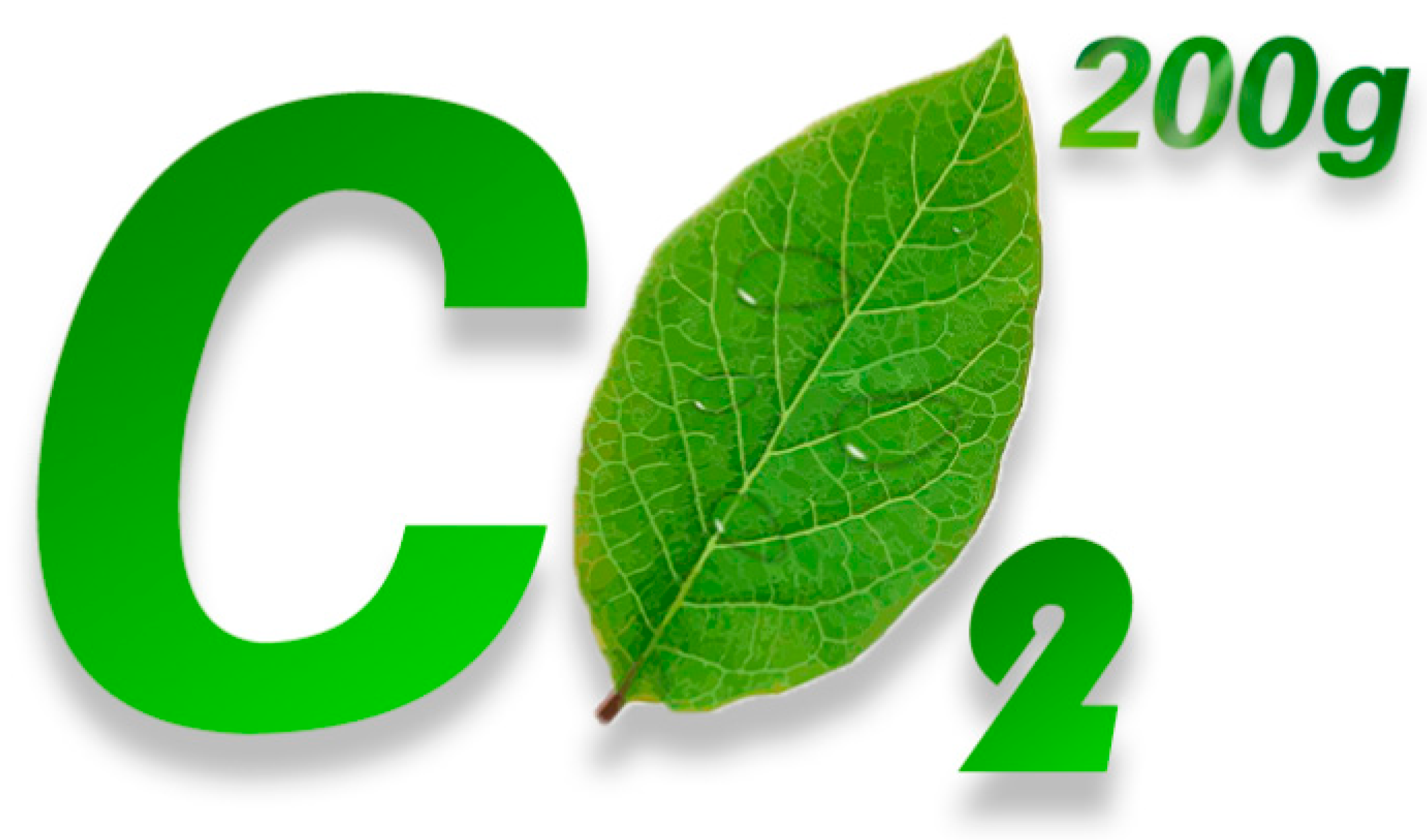 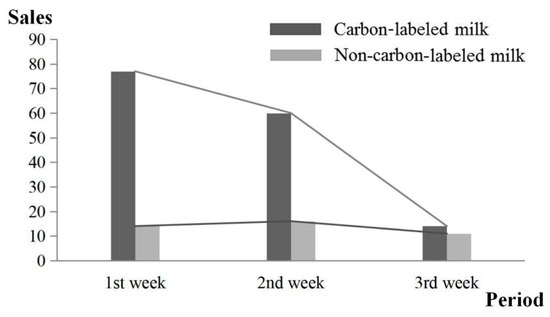 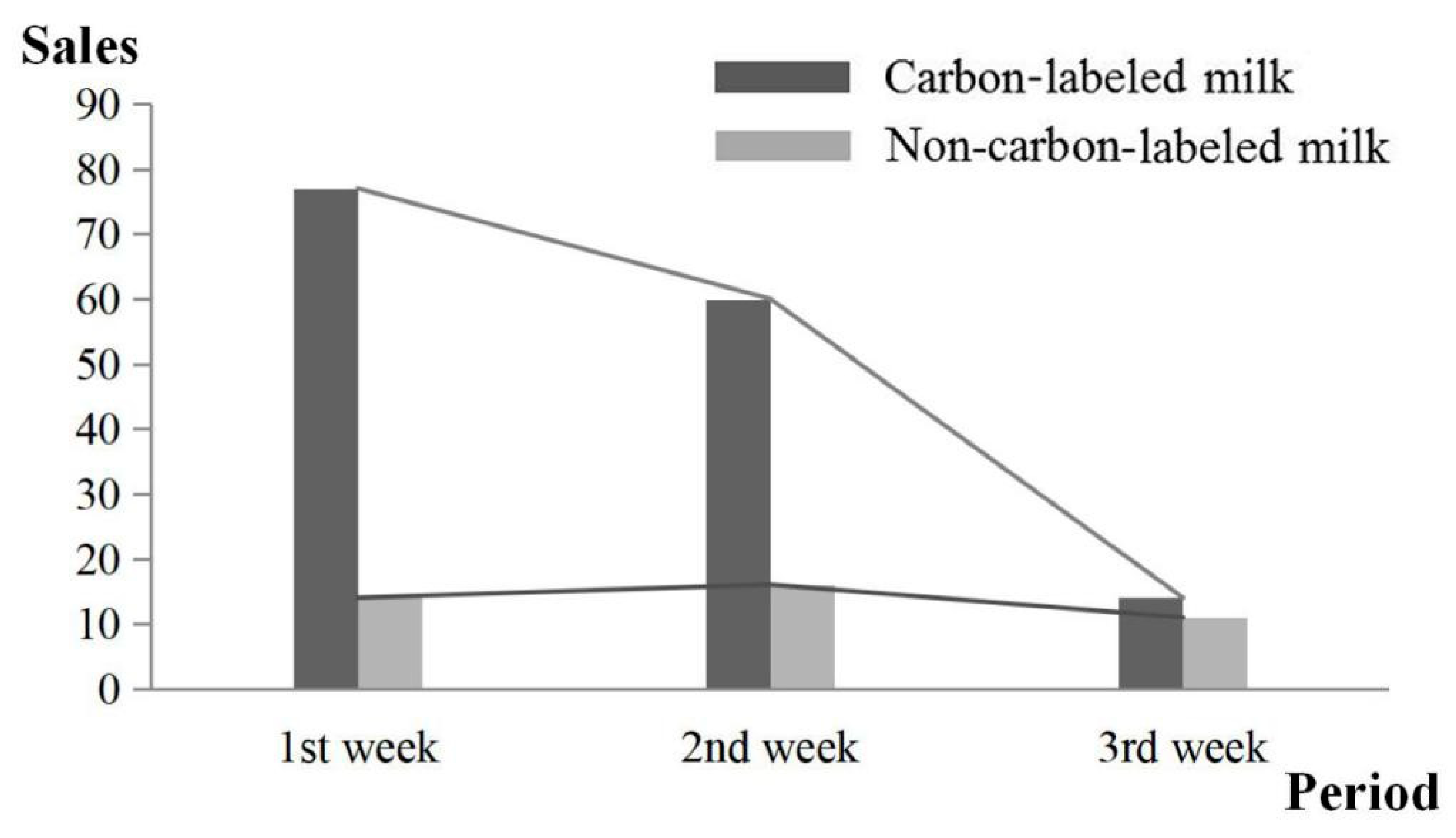