Reorienting Nurturing Care for Early Childhood Development during the COVID-19 Pandemic in Kenya: A Review
Next Article in Special Issue

Effects of Unloaded vs. Ankle-Loaded Plyometric Training on the Physical Fitness of U-17 Male Soccer Players
Previous Article in Journal

Comparisons of Accelerometer Variables Training Monotony and Strain of Starters and Non-Starters: A Full-Season Study in Professional Soccer Players

The objectives of this study were: (i) to analyse anthropometric parameters and throwing speed from seven meters in amateur male handball players of different ages; (ii) to know the relationship between anthropometric parameters and throwing. One hundred seventy-six male handball players (16.5 ± 5.1 years old) participated in the study, classified according to their age: senior (n = 35), U18 (n = 30), U16 (n = 37), U14 (n = 50) and U12 (n = 24). All participants were evaluated by anthropometric measurements (height, weight, body mass index, arm span, hand width) and throwing speed from 7 m standing. A one-way analysis of variance with a Bonferroni post hoc test was used to establish the differences between teams. Pearson’s simple correlation coefficients were calculated between analyse anthropometric parameters and throwing speed. Multiple linear regression was used to predict the throwing speed. Only BMI was related with throwing speed in all age groups (0.506 > r < 0.813, p < 0.05). Throwing speed was predicted (24–72%) with only one or two variables in each model. The selected variables were: BMI, arm span in U16 model and height U14 model, and the BMI, arm span and height are proved to be good predictors of TS in male handball players.
Keywords: ball throwing; hand size; arm span; motor performance ball throwing; hand size; arm span; motor performance

Throwing the ball into the opponent’s goal is one of the most important actions for the achievement of sporting success in handball [1]. This technical-tactical gesture draws special attention as the goals difference between teams results in winners and losers at the end of a handball game [2,3,4]. It has been shown that speed and accuracy are the two most important factors while throwing the ball into the goal successfully [5]. The ball deceleration, especially when throwing further from the 9-m line, is considered a key element [6,7]. While several studies show that the increase in speed impairs accuracy [8,9].
Traditionally, it has been estimated that throwing speed (TS) depends on different factors such as technique, temporal coordination of the different body segments, and power of both upper and lower body muscle groups [10]. On the other hand, anthropometric characteristics [7,11,12], speed, and throwing accuracy [8,9] are considered as the most appropriate variables for talent detection [13].
Hand size and fingers length, influence the most on throwing in handball [14,15,16]. The latter allows a greater and better mastery of the ball [17] and seems to be the best indicator of throwing accuracy and shot due to its positive correlation with the maximum grip strength [18]. Additionally, hand span is commonly used as a reference in models identification in young handball players [19]. It has been reported that that other characteristics such as body size could also have a positive effecting handball [20].
Previous work have considered both throwing distances from 7 m [21,22,23] and 9 m [24,25]. This is due to their influence on the final result since it has been reported that the efficacy of the throws into the goal is one of the most important distinction between winners and losers [26]. Finally, the throwing from 7 m distances have been selected, since within the rules of handball [27] by simple easy execution and correct systematic repetition. Although there exist studies analyzing the evolution of body morphology over age in handball players, research examining the influence of those features on throwing speed at different ages is limited.
Consequently, the objectives of this study were: (i) to analyse anthropometric parameters and TS from seven meters in male handball players of different ages and, (ii) to know the relationship between anthropometric parameters and throwing speed.

All the participants executed the same protocol under the same circumstances and were guided by a researcher. The measurements of height (m), weight (kg), and BMI (kg/m2) were found for every participant using a weighing scale (SECA 769; SECA Corp., Hamburg, Germany) provided with a precision stadiometer (SECA 222; SECA Corp., Hamburg, Germany). All the measurements were taken with participants wearing only underwear. The anthropometric assessment followed the guidelines issued by the International Society for the Advancement of Kinanthropometry (ISAK) [28]. All measurements were made by an ISAK Level 2 anthropometrist. A technical intraobserver measurement error of 1% was considered [29]. Arm span was measured and the distance from the edge one arm (measured at the fingertips) to the other was determined by means of a Lufkin metal anthropometric tape, standing against a flat wall, 90° arm abduction, elbows and wrists extended and palms facing forward [30]. Hand span was measured and the distance from the tip of the thumb to the tip of the little finger on the outstretched hand was determined with a metal anthropometric tape (Lufkin W606PM, Apex Tool Group, Maryland, MD, USA). All the measurements have a precision of 0.001 m.
In regards with the measurement of TS, a protocol of nine standing throws was set up using only the best result for analysis. First, a standardized warm-up established by the researchers and technical staff was performed, consisting of five min of low intensity running, three min of mobility exercises and two min of active stretching and ballistic exercises. Finally, warm-up focused on throwing was developed prior to participation. Throws were performed from the seven-meter line, allowing only one foot to be lifted and never stepping on the seven-meter line, simulating a penalty throw in handball [27], with a 30-s rest between each throw, which ensures a complete recovery [31]. The TS was recorded using a high performance sports radar (Stalker Pro 2 Radar Gun, Applied Concepts, Inc./Stalker Radar, Texas, TX, USA) placed at the 9-m line, behind the player throwing the ball, and pointing to the executing arm. Only throws that entered directly into the goal, without touching the ground, were considered as valid. Molten official handballs (Molten Corp., Hiroshima, Japan) were used, (circumference: 50–60 mm; weight: 290–475 g), depending on the regulation size corresponding to the participant’s age.

The basic descriptive statistics mean and standard deviation were calculated. All the variables satisfied the tests of homoskedasticity (Levene variance homogeneity test) and normality (Kolmogorov-Smirnov test) of their distributions. One way of variance (ANOVA) was used to compare means between age groups. As significant variable effects were determined (α = 0.05), Bonferroni post-hoc pairwise comparisons were executed to determine where the main effects occurred. The intragroup linear relationships between variables pair was examined using Pearson linear correlation. A multiple linear regression was carried out to obtain the β index stepwise selection. Correlations between arm span, hand span and BMI were found via R2. TS was used as a dependent variable. The ranges of the variance inflation factor for all the independent variables were between 1.009 and 2.830, and they showed a small influence of collinearity. The Durbin-Watson statistic was calculated and showed that there was no autocorrelation in the residuals (the values of the statistic ranged from 1.378 to 1.627). The analysis was complemented by descriptive statistics, model fitting, estimation and confidence intervals. Relative reliability analysis was examined by the intragroup correlation coefficients (ICC). An ICC equal at or above 0.70 was considered acceptable [32]. The magnitude of between-groups differences was expressed using Cohen’s d effect size (ES) [33]. The ES adopted criteria to interpret the magnitude were as follows: trivial (<0.2), small (0.2–0.6), moderate (0.61–1.2), large (>1.2) [33]. Statistical analyses were performed using the SPSS (version 25, SPSS Inc., Chicago, IL, USA, Ill). Power analysis (post-hoc) was done using G*power software, version 3.1. Using a moderate effect size of 0.1, statistical power was 0.89 (1-beta) [34,35].

The conclusions of this study are BMI, arm span and height are proved to be good predictors of TS in amateur male handball players. However, further studies need to be undertaken in this area in order to reach a greater consensus among researchers, especially to unify what would be the anthropometric variable that mostly influences on TS in handball. The findings reported here make sport scientists and coaches clearly distinguish the different variables influencing on TS at different ages and, therefore, they facilitate their work not only on throwing improvement, but also on the return-to-play process. Hence, given that the anthropometric parameters analyzed here are easy to assess, these might be evaluated by coaches systematically over the sport career of the players allowing to know, from a practical standpoint, their evolution and the influence of body morphology on throwing speed. 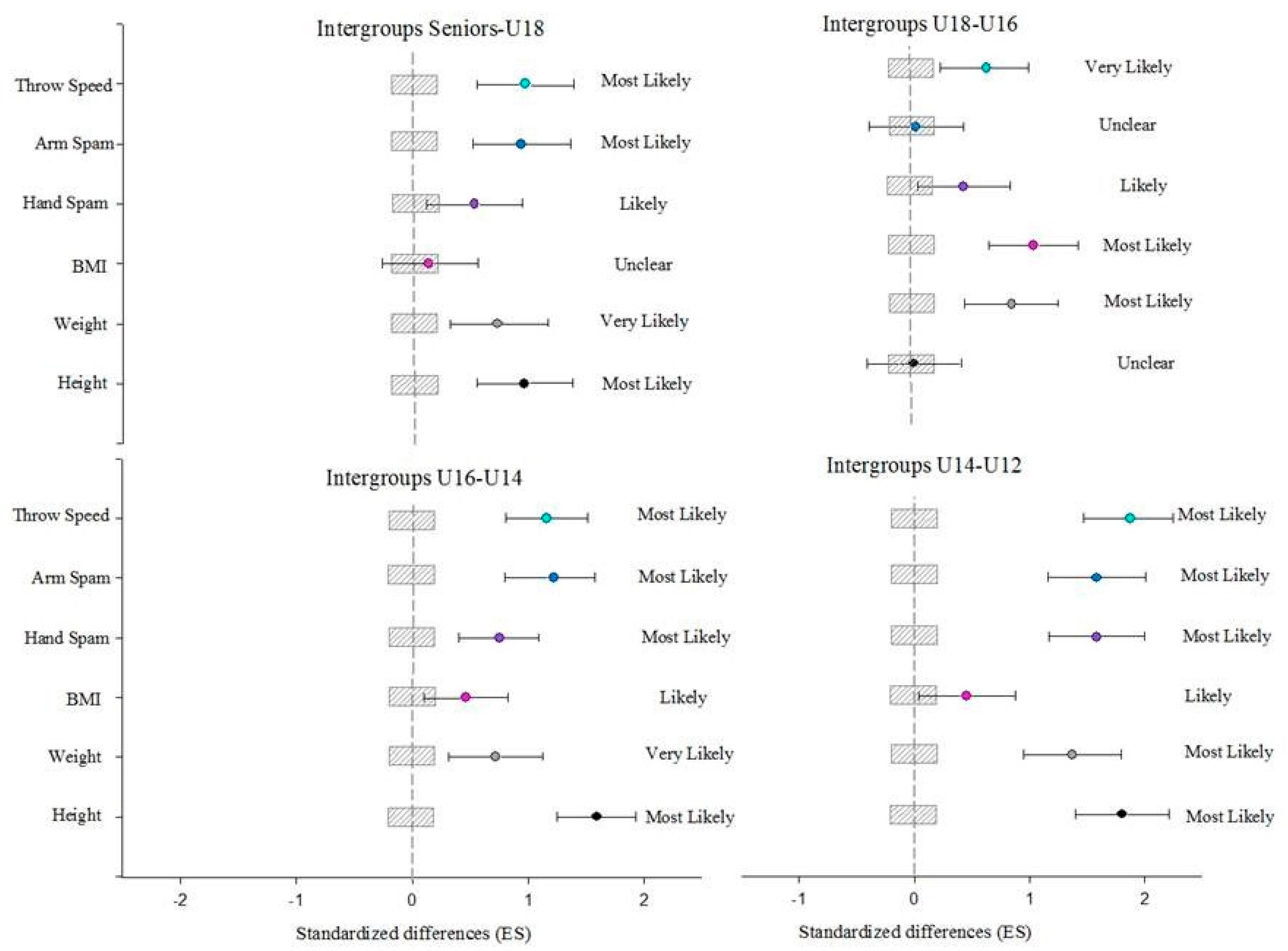