New Risk Situations Related to Low Noise from Electric Vehicles: Perception of Workers as Pedestrians and Other Vehicle Drivers

Sales of electric and hybrid electric vehicles are increasing steadily worldwide, and consequently their presence increases in city areas. At low speeds, the low levels of noise produced by these vehicles could become a new risk factor for road users. However, the magnitude of the risk has not been accurately determined. In addition, its inclusion in the work environment could pose a new risk that should be managed. Thus, in relation to low noise levels of electric and hybrid vehicles, this study aimed to characterise the risk situations and determine the risk perception of workers as pedestrians and internal combustion engine vehicle drivers coming into contact with these vehicles. The data were extracted from 417 questionnaires filled out by the employees of public service companies who come into contact with electric and hybrid vehicles during their working day in the city of Málaga, in the region of Andalusia, Spain. According to the experiences reported, it seems that the risk due to the low noise levels of electric vehicles is moderate and does not reach alarming levels. These risk situations usually occurred in low speed urban areas, particularly when crossing the road, or in semi-pedestrian areas. Almost half the respondents considered that the electric vehicle poses a risk to other road users because it is more difficult to hear, and they believe it likely that other road users could be injured. Despite that risk, pedestrians did not change their way of walking or moving around the parking areas and other areas of the company. Electric and hybrid electric cars are now required to produce sound when travelling at low speeds. Nevertheless, the effectiveness of this measure should be assessed once implemented and future research should explore alternative non-acoustic measures. View Full-Text
Keywords: electric vehicles; risk perception; pedestrian; road users; road traffic safety; low noise; occupational health and safety electric vehicles; risk perception; pedestrian; road users; road traffic safety; low noise; occupational health and safety
►▼ Show Figures 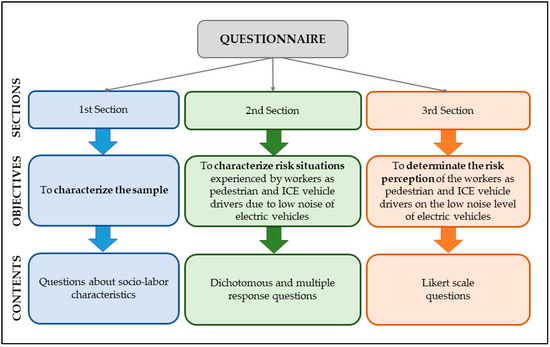