Family and School Context: Effects on the Mental Health of Brazilian Students
Previous Article in Journal

The Relationship between Emotion Regulation and Emotion Knowledge in Preschoolers: A Longitudinal Study

From June 2018 to August 2018, a school-based epidemiological survey was performed to explore the positive rate of mental health problems and to analyze their associated factors among high school students in Henan province.
When this survey began, more than two million adolescents studied at 852 high schools in Henan province, with an average of 2465 students per school. As the main aim of this study was to evaluate mental health problems in high school students, the sample size was calculated as N = P. With the maximum value of 0.25 for P(1-P), α = 0.05 (Zα/2 = 1.96), and the absolute error (d) at 1%, a sample size of 9604 was determined to be sufficient. Predicting a 30% nonrespondent rate, the sample size was estimated to be 13,720 participants. It was further assumed that 300 students (100 from each grade) would be selected from each high school; therefore, 46 high schools would be needed.
A stratified two-stage cluster sampling procedure was used, and participants were selected from 46 high schools located in all 17 provincial cities in Henan province. In Stage 1 of the study, 46 high schools were randomly selected based on probability proportional to enrollment size. In Stage 2, grades were considered as strata, and 2–3 classes in each grade of the 46 selected high schools were randomly selected as clusters based on class sizes. All students in the selected classes were invited to participate in the study by their head teachers, and individuals willing to take part were provided written detailed instructions and information about data collection procedures. All participants completed their surveys during self-study classes in the presence of the principal investigator.

Ethical approval was granted by the Ethics Committee of Health Science Center, Xi’an Jiaotong University, and the local schools that participated in this study (project number: 2018-296). Detailed information about the study, its potential risks and benefits, and participants’ roles were provided to both participants and their parents, and informed consent was obtained from all participants and their parents before data collection. Participation was voluntary and anonymity was guaranteed.

The Mental Health Inventory of Middle School Students (MMHI-60) is a self-administered screening test designed to assess students’ general mental health. It was developed by Wang et al. [31] after two years of follow-up investigation into the mental health problems of middle and high school students in more than 100 schools and has been successfully applied to middle and high school students in China [32,33,34]. The MMHI-60 consists of 60 items, each requiring respondents to indicate on a five-point scale whether they have recently experienced a particular symptom or type of behavior. Examples of the questions include “Have you recently felt nervous and strung out?”, “Do you frequently think of committing suicide?”, and “Do you feel unable to solve problems?”. The MMHI-60 includes 10 subscales expressing the most relevant aspects of mental health: obsessive–compulsive tendencies, paranoid ideation, hostility, interpersonal sensitivity, depression, anxiety, academic stress, maladaptation, emotional disturbance, and psychological imbalance. MMHI-60 scores are calculated by summing the 60 items and dividing the sum by 60, and each subscale score is calculated by adding the six items and dividing the sum by six, yielding subscale scores and total scores ranging from 1 to 5. The higher the score, the worse the mental health condition. According to Wang et al. [31], a cutoff score of 2 is associated with having a mental health problem, and that cutoff score has shown good sensitivity and specificity in previous studies [32,33,34]. The internal consistency reported by Wang et al. was found to be sufficient (test–retest reliability: 0.716–0.873; split-half reliability: 0.634–0.873). The Cronbach’s alpha of the total scale was 0.967 and ranged from 0.684 to 0.862 between subscales in this study.

All the data collected from the study were entered in duplicate using EpiData 3.1 software. All statistical calculations were performed using IBM SPSS 22.0. Continuous variables were expressed as the mean “±SD”. Categorical or ordinal data were expressed as number frequencies (%), and between-group differences were tested using the Pearson’s χ2-test. Estimates of the positive rate of mental health problems with 95% confidence intervals were calculated separately for the overall population. A univariate logistic regression was performed to select possible associated factors for mental health problems with p values of less than 0.05. Variables significantly associated with mental health problems in the univariate analysis and reported by previous studies were entered as independent variables in a multivariate regression analysis. A two-sided p value less than 0.05 was considered statistically significant.

A total of 15,732 high school students from 46 high schools consented to participate in the survey, yielding a response rate of 91%. After excluding 677 ineligible questionnaires (more than 15% of responses missing), 15,055 students (7514 males and 7541 females) were recruited (see Figure 1).

The univariate analysis of demographic variables is presented in Table 3. Mental health problems were more likely to be reported among students who were older, male, in higher grades, had physical disease, had chronic constipation, consumed cigarettes or alcohol, engaged in sexual behavior, lived on campus, reported gaming addiction, and had a single-parent family or a mother with a master’s degree (p < 0.05). Students who lived in urban areas or had a mother who held a bachelor’s degree were less likely to have mental health problems (p < 0.05).
The results of the multivariate analysis are presented in Table 4. Higher grades, residence on campus, engagement in sexual behavior, alcohol consumption, gaming addiction, physical disease, chronic constipation, and having a mother with a master’s degree were significantly associated with higher odds of having mental health problems, while living in an urban area or having a mother with a bachelor’s degree was associated with lower odds (p < 0.05). The strongest associated factor for mental health problems was physical disease (OR = 2.04, 95%CI = 1.77–2.35), followed by chronic constipation (OR = 2.02, 95%CI = 1.8–2.25), and having a mother with a master’s degree (OR = 1.87, 95%CI = 1.17–2.99).

In this study, we found a relatively high proportion of mental health problems in high school students. High school students were capable of identifying significant differences in their mental health problems, suggesting that universal mental health risk screening via student self-reporting is potentially useful in identifying aggregated community risk in a given school that may warrant differential deployment of mental health prevention and intervention strategies. We suggest that the prevention of mental health problems in high school students be strengthened, especially in those with physical illnesses, unhealthy behaviors, and single-parent families. This cross-sectional study has significant advantages over other studies in terms of the stratified cluster sampling process and its large sample. However, several limitations must also be recognized. Despite the large sample size, participants were recruited from one province and the findings cannot be generalized to the whole adolescent population in China. In addition, due to the cross-sectional design of our study, no causal relationships can be addressed. More longitudinal, school-based cohort studies and randomized controlled trials on the effectiveness of specific interventions addressing modifiable risk factors are clearly needed in the future.

This research was funded by the Soft Science Research Program of Shaanxi Province, grant number 2020KRM169, and the Fundamental Research Funds for the Central Universities, grant number xjj2018153.

The authors declare no conflict of interest. The sponsors had no role in the design, execution, interpretation, or writing of the study. 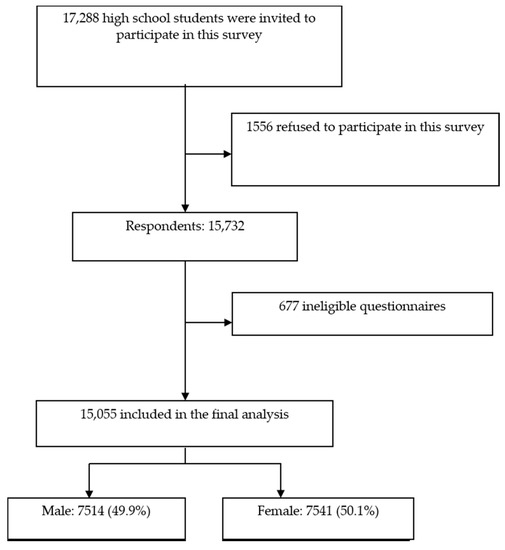