Socio-Demographic Correlates of Total and Domain-Specific Sedentary Behavior in Latin America: A Population-Based Study
Next Article in Special Issue

Impact of the Built Environment and the Neighborhood in Promoting the Physical Activity and the Healthy Aging in Older People: An Umbrella Review
Previous Article in Journal

A Preliminary Investigation of the Relationship between Motivation for Physical Activity and Emotional and Behavioural Difficulties in Children Aged 8–12 Years: The Role of Autonomous Motivation
Previous Article in Special Issue

Adverse pregnancy outcomes disproportionately affect women of color and poor women in the U.S. and are major predictors of infant morbidity and mortality [1]. While numerous studies have attempted to determine the etiology of these persistent birth outcome disparities, a single unifying explanation has not been elucidated [2]. Studies examining the aggregate, combined influence of multiple factors are likely needed to better explain and resolve racial health disparities [3].
Prenatal maternal stress is one factor that has been associated with increased risk of adverse birth outcomes, including preterm birth and low birth weight [4,5,6]. Wadhwa et al. demonstrated that pregnant women who reported higher levels of life event stress, measured using Cohen’s Perceived Stress Scale (PSS) among other standardized questionnaires, had increased risk of delivering low-birth-weight neonates [6]. The study also found that elevated pregnancy anxiety was associated with lower gestational age at birth [6]. These findings are consistent with other reports of positive associations between high PSS scores and risks of low birth weight and preterm birth [7,8]. However, while maternal perceived stress has been demonstrated to significantly impact birth outcomes, individual-level stress data are not always readily available, particularly in large population-based registries.
In contrast, neighborhood violent crime rates may be publicly available and easily accessible. Research has shown that neighborhood violence is a risk factor for poor mental health [9,10]. Many studies in the literature have examined the effect of perceived neighborhood violence on stress levels in urban, nonpregnant cohorts and have shown that high levels of perceived neighborhood violence and crime are associated with increased psychological distress and depression [11,12,13,14]. A limited number of studies involving pregnant cohorts have also supported this association [15,16]. Further, neighborhood violent crime is highly associated with residents’ perception of neighborhood violence, whereas other forms of crime, such as property crime, are less strongly associated [17].
Given that large registry databases will likely be needed to identify contributors to birth outcome disparities, especially when effects may be subtle, the use of publicly available data on neighborhood violence may serve as one potential proxy measure for maternal stress. To date, however, studies examining the association between neighborhood-level violent crime and measured perceived stress in pregnant, urban cohorts have been lacking in the literature. Therefore, we aimed to investigate whether publicly available neighborhood violence rates—defined as incidents of aggravated assault with and without a firearm, robbery with and without a firearm, rape, other assaults, and homicide—were associated with measured perceived stress in a prospective pregnancy cohort.

We conducted a secondary analysis of a prospective cohort study, Motherhood and Microbiome (n = 2000) [18,19]. The methods of the original study were previously published [18]. Briefly, women with singleton gestation pregnancies receiving prenatal care at the University of Pennsylvania enrolled between December 2013 and February 2017 after providing written, informed consent. Exclusion criteria included major fetal anomalies, HIV seropositive status, history of organ transplant, chronic steroid use, or enrollment into the study during a previous pregnancy.
Of the 2000 initial participants, 1813 women completed Cohen’s Perceived Stress Scale (PSS-14) in the first visit at 16–20 weeks of gestation [20]. Of these women, 1309 lived in Philadelphia, PA, where community violent crime data were available, and comprised the analytic sample for this analysis (Figure 1). The Institutional Review Board of the University of Pennsylvania approved this study (IRB #818914).

Publicly available violent crime data from the City of Philadelphia were downloaded and curated at the Urban Health Collaborative at the Drexel University Dornsife School of Public Health [21]. Violent crime was defined as aggravated assault with and without a firearm, robbery with and without a firearm, rape, other assaults, and homicide. Using violent crime data from 2015, we then calculated annual census tract incidents per square kilometer in 212 census tracts. We divided violent crime incidents into quartiles among cohort participants (as opposed to quartile of tract crime incidents) and defined high exposure as the highest quartile of violent crime among participants (>352.5 violent crimes/square kilometer per year). Spatial analysis was conducted and maps were created using ArcGISPro 2.5.0. (Esri, Redlands, CA, USA)

Participants completed Cohen’s Perceived Stress Scale (PSS-14) during three clinical visits. These visits occurred between 16–20 (visit 1), 20–24 (visit 2), and 24–28 (visit 3) weeks of gestation. As previously done by us and others, we classified women as having high stress levels if their score was ≥30, which is the 80th percentile in the Motherhood and Microbiome cohort [22,23]. We chose to focus this analysis on the first visit (16–20 weeks) because most women had stress data from that visit and because the scores had moderate-to-strong correlations at the three time points (r = 0.64–0.74, p < 0.0001).

We considered several variables as potential confounders of the association between neighborhood violence and stress, including self-reported race, age, parity, education level, insurance status, marital status, and comorbid conditions such as pregestational diabetes and chronic hypertension. Race was dichotomized as Black and non-Black due to small numbers of non-Black participants. Neighborhood characteristics, including percent foreign-born, poverty, and high school graduation rates, were also assessed.

Bivariate analysis of cohort demographics (race, age, parity, education level, insurance status, marital status, and comorbid conditions) and neighborhood characteristics (percent foreign-born, poverty, high school graduation rates) were analyzed in association with neighborhood violent crime incidents and maternal stress levels. We used t-tests and chi-square tests to analyze unadjusted associations of these variables with maternal stress levels and neighborhood violence, as appropriate. We examined scatter plots and correlations between neighborhood violent crime and stress. We considered p-values < 0.05 significant.
For our primary analysis, we used generalized linear mixed models (Proc Glimmix, SAS 9.4, Carey, NC, USA) to model the unadjusted and adjusted associations (odds ratios and 95% confidence intervals) of high neighborhood violent crime with high perceived stress, clustering by census tract. Covariates, either alone or in conjunction with others, that substantially altered the association of crime with stress by more than ~10% were retained in the adjusted model, while variables that did not confound the association were dropped to achieve parsimony. Furthermore, we performed models stratified by race. Finally, as a sensitivity analysis, we explored whether a different measure of crime at a finer scale (counts within 400 m buffers surrounding each participant’s residence) were similarly associated with perceived stress.

In conclusion, we found that, regardless of race, neighborhood violent crime was associated with high levels of perceived stress in an urban, pregnant cohort. Future work focused on assessing the generalizability of this association is needed to ensure that neighborhood violent crime incidents can be a useful, publicly available social determinant of health for larger registry-based studies. Further, given the finding of disparate exposure to crime and prenatal stress by race within our study, future work is warranted to determine whether urban neighborhood violence and/or stress reduction strategies would alleviate racial disparities in birth outcome.

The following are available online at https://www.mdpi.com/1660-4601/17/15/5585/s1, Table S1: Demographic characteristics of included and non-included participants from Motherhood and Microbiome cohort (n = 1943).

The authors would like to thank the participants and staff of the Motherhood and Microbiome study. 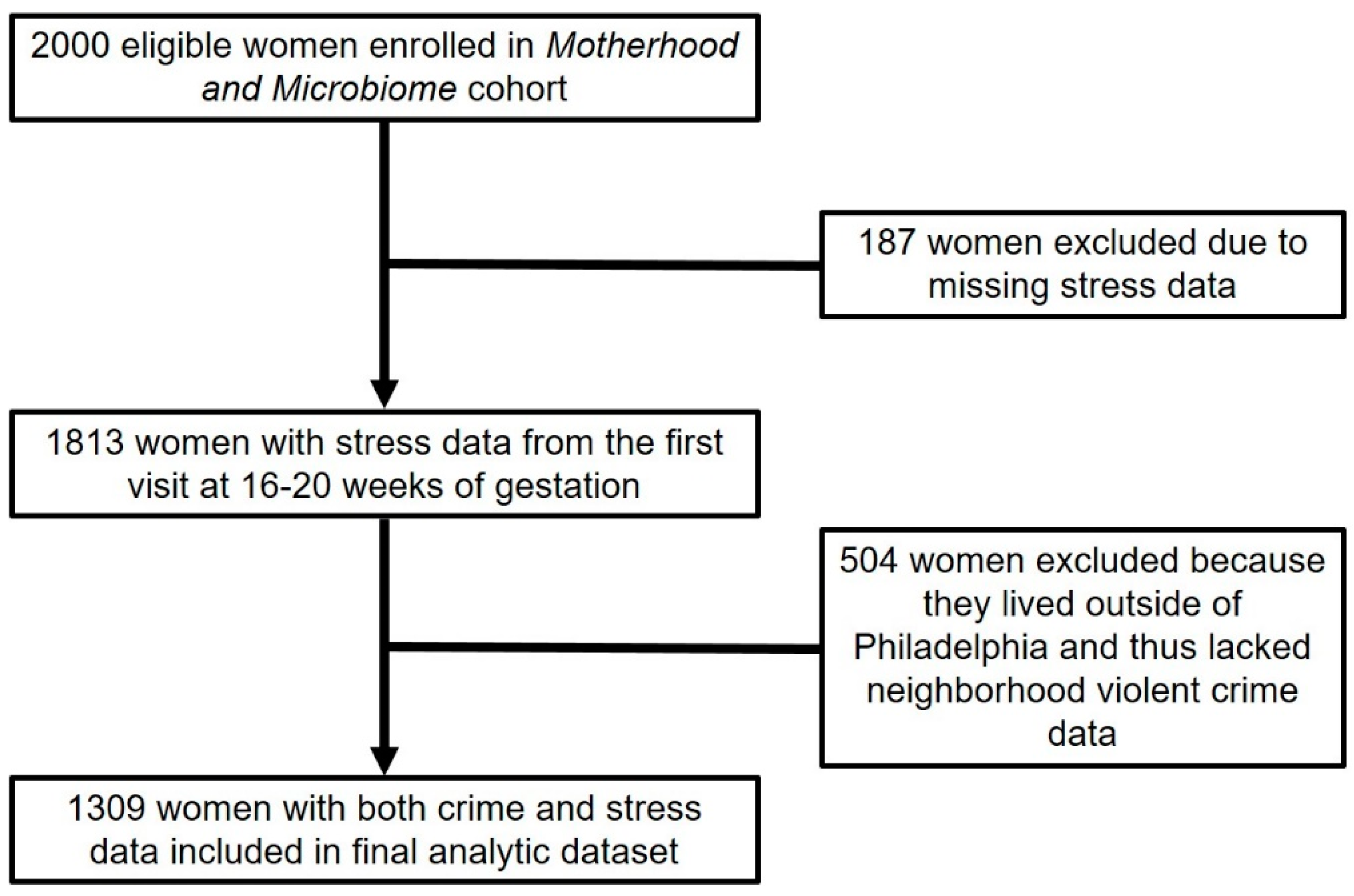 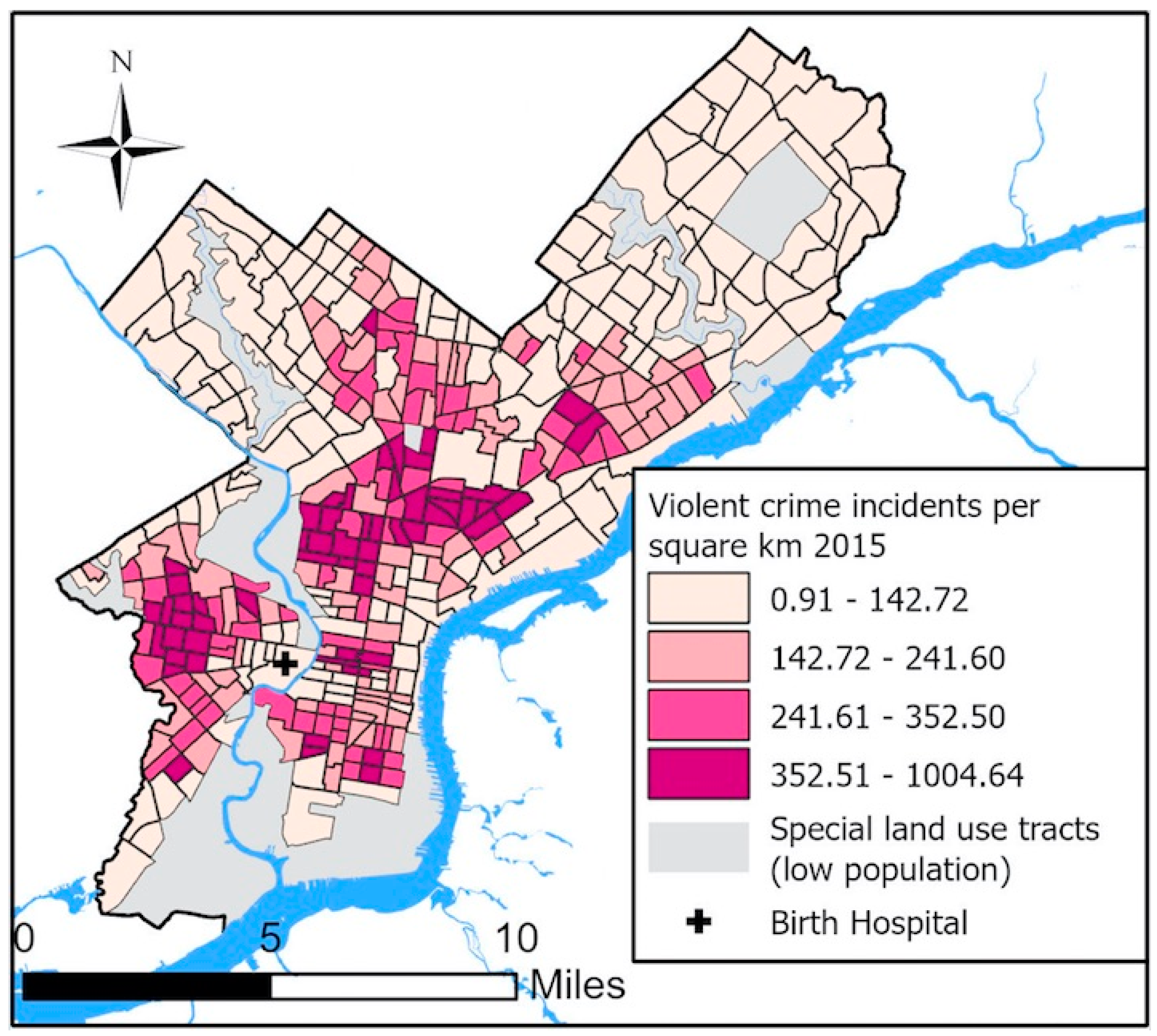