Imbalances in the Study of the Relationship between Leisure and Self-Esteem: A Systematic Review
Previous Article in Journal

Improving Breastfeeding by Empowering Mothers in Vietnam: A Randomised Controlled Trial of a Mobile App

The aim of this study was primarily to evaluate differences between parental opinion about the diet and overall changes in children’s symptoms of functional abdominal pain (FAP) during the low fermentable oligosaccharides, disaccharides, monosaccharides, and polyols (FODMAP) diet and National Institute for Health and Care Excellence (NICE) diet. Secondly, this paper examined the agreement between parental perception of children’s symptoms and children’s self-assessment of symptoms during the diet in both treatment groups. Twenty-seven children with diagnosed functional abdominal pain (FAP) were randomized to one of two group, receiving the low FODMAP diet or the diet based on NICE guidelines. Children reported gastrointestinal symptoms at baseline and during the diet. At the end of the intervention, parents assessed their children’s diet and symptoms changes, using Likert scales. The agreement between parental and children assessments of gastrointestinal symptoms was defined as the percentage of compatible answers. In the low FODMAP group a significantly lower percentage of parents (38%) declared that it was easy to follow the diet, compared to the NICE group (57%), (p = 0.017). A high percentage of parents in both groups reported improvement in all symptoms of children during dietary intervention. A high level of agreement was also observed between parental and children’s self-assessment of abdominal pain intensity and frequency. Our research suggests that in parental opinion the low FODMAP diet is as effective as the diet based on NICE guidelines in children with FAP. However, the low FODMAP diet may seem more difficult to follow, and this may have had an impact on the effectiveness and acceptability of the FODMAP diet by children. View Full-Text
Keywords: functional abdominal pain; pediatric; diet therapy; FODMAP; children; parents functional abdominal pain; pediatric; diet therapy; FODMAP; children; parents
►▼ Show Figures 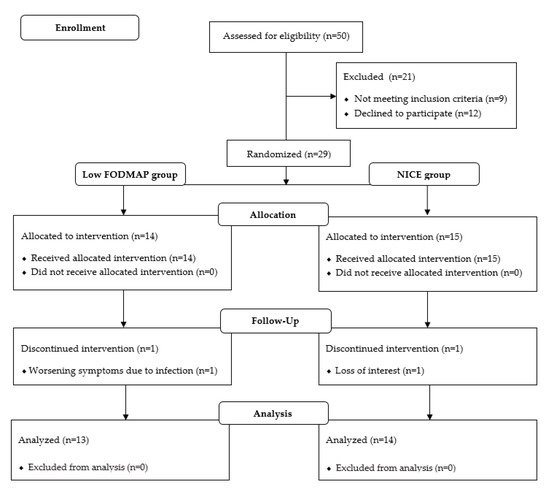