Long-Term Influence of the Practice of Physical Activity on the Self-Perceived Quality of Life of Women with Breast Cancer: A Randomized Controlled Trial
Next Article in Special Issue

Countering Vaccine Hesitancy among Pregnant Women in England: The Case of Boostrix-IPV

Coital Frequency and the Probability of Pregnancy in Couples Trying to Conceive Their First Child: A Prospective Cohort Study in Japan

Background: Low fertility persists but remains unexplained in Japan. We examined whether the probability of pregnancy was influenced by coital frequency, age, reproductive age (assessed by antimüllerian hormone, AMH), and BMI. Methods: We established a two-year prospective study with a sample of hormonally monitored Japanese women aged 23–34 years wanting to conceive their first child. For a maximum of 24 weeks participants recorded menstrual bleeding, sexual intercourse, ovulation, and pregnancy. Additional information on pregnancy and infertility treatment was collected one and two years after intake. Results: The natural conception rate and coital frequency were both low in this sample. Among 80 participants, 44% (35) naturally conceived in 24 weeks. After two years, 74% (59) of women had delivered or were currently pregnant, 50% (40) due to natural and 24% (19) due to assisted conception, and 5% (4) were lost to follow-up. By two years, 56% (45) of women had sought fertility treatment. In 18% (58/319) of the observed ovarian cycles across 24 weeks there was no intercourse in a fertile period. Higher coital frequency at intake was associated with increased probability of conception by 24 weeks of follow-up (OR 1.23, 95%CI 1.02, 1.47). Chronological age, reproductive age, and BMI were not associated with the probability of pregnancy at 24 weeks. Conclusions: Our results suggest that first, natural conception rates could potentially increase with more frequent and well timed intercourse, and second that further work is needed to understand why even in a motivated sample of women monitoring their fertile periods, both the conception and coitus rates were low. View Full-Text
Keywords: antimüllerian hormone; Asia; fertility; hCG test; infertility; LH test; sexual behavior; time-to-pregnancy; urinary estrogen; urinary progesterone antimüllerian hormone; Asia; fertility; hCG test; infertility; LH test; sexual behavior; time-to-pregnancy; urinary estrogen; urinary progesterone
►▼ Show Figures 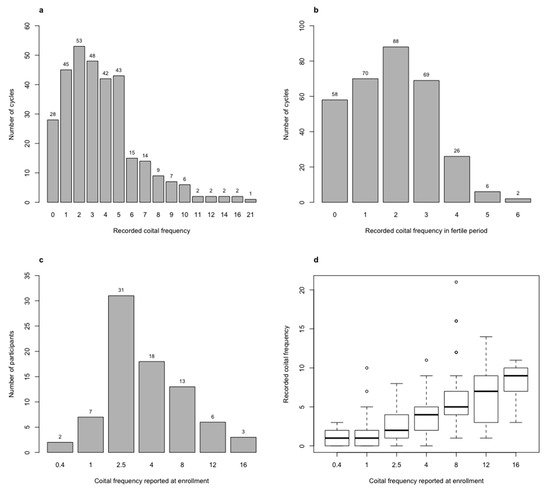