Human Breathable Air in a Mediterranean Forest: Characterization of Monoterpene Concentrations under the Canopy
Next Article in Special Issue

Potential Years of Life Lost Due to COVID-19 in the United States, Italy, and Germany: An Old Formula with Newer Ideas

Today, the world is facing the challenge of a major pandemic due to COVID-19, which has caused more than 6.1 million cases of infection and nearly 370,000 deaths so far. Most of the deaths from the disease are clustered in the older population, but the young and children are not spared. In this context, there is a critical need to revisit the formula for calculating potential years of life lost (PYLL). Data on age-specific deaths due to COVID-19 in three countries, including the United States (US), Italy, and Germany, were evaluated. New York State, as a significant outlier within the US, was also included. PYLLs in the US were five times as high as those of Italy. Compared with Germany, PYLLs in Italy were 4 times higher, and the rates in the US were 23, 25, and 18 times higher when using upper age limits of 70, 75, and 80, respectively. Standardized PYLLs in New York were 2 times as high as the rates in Italy, and 7 to 9 times as high as PYLLs in Germany. The revised formula of PYLL, using an upper limit of age 80, is recommended to accurately measure premature deaths due to a major disastrous disease such as COVID-19.
Keywords: COVID-19; PYLL; disease burden; United States; Italy; Germany; New York State COVID-19; PYLL; disease burden; United States; Italy; Germany; New York State

The current pandemic of COVID-19 has created havoc by affecting 213 countries and territories. Every day, the incidence and death rates due to COVID-19 have been escalating in an exponential trend [1]. Obviously, this pandemic has suddenly made a paradigm shift in our existing knowledge of the global burden of diseases. Due to the changing pattern of risk due to COVID-19, with 60–70% of mortality being observed in the elderly population [2,3,4,5], this pandemic raises questions among researchers when using some of the conventional methods of assessing the societal burden of diseases. The common metrics used for quantifying the overall disease burden and prioritizing causes of deaths are disability-adjusted life years (DALYs), potential years of life lost (PYLL), quality-adjusted life-year (QALY), and disability-adjusted life expectancy (DALE), among others [6,7,8,9].
PYLL is often used in calculating deaths and comparing the health system performance of countries in addressing major killer diseases such as cancer, cerebrovascular disease, ischemic heart disease, accidents, infectious diseases, and others [10,11,12]. PYLL, as proposed by Romeder and McWhinnie in 1977, is a measure of premature mortality [12]. The method of estimating PYLL involves calculating the additional time a person would have lived had he or she not died prematurely [12]. In this method, greater weight is given to deaths at a younger age and a lower weight to deaths at an older age. Thus, PYLL emphasizes the loss of the potential contribution that younger individuals could make to society [12]. Interestingly, the COVID-19 pandemic caused a paradigm shift of our knowledge because deaths from this pandemic disproportionately affected the elderly population [2,3,4,5,13,14,15]. In this context, the fundamental science behind using more weight for the loss of younger aged people and discounting the loss due to the deaths of older people in the case of PYLL is under challenge. Additionally, applying the conventional formula of PYLL in the case of COVID-19 is misleading and is an underestimation of the actual societal loss in terms of potential years of life should the people lived longer. Therefore, there is a critical need to address fundamental and important questions regarding the calculation of PYLL based on the concept that people are living longer and can contribute more years to society.
In the original formula of PYLL [12] in 1977, age 70 was considered the upper age limit. The Organization for Economic Co-operation and Development (OECD), an intergovernmental economic organization with 36 member countries, including the most economically developed countries, has suggested using the age of 75 for the calculation of PYLL [16]. The Association of Public Health Epidemiologists in Ontario, Canada, has also been using age 75 as the upper limit since 2006, based on an average life expectancy of Canadians for both sexes combined [17].
However, in Canada, the average life expectancy is 80 years for males and 84 years for females in 2019 [18]. According to the World Bank Report [18], the average life expectancy at birth for most countries of the European Union is 80 years or more: Austria—82 years, Belgium—82 years, Denmark—81 years, France—83 years, Germany—81 years, Italy—83 years, Netherlands—82 years, Spain—83 years, and Sweden—83 years. The average life expectancy in the United States was 79 years in 2019. Because of the increase in the life expectancy in recent years in most developed (and developing) countries, and changes in disease patterns even in the case of infectious diseases such as COVID-19, the overall objective of this research is to develop a new but practical and scientific method in the calculation of societal loss by using PYLL. The specific aim of this study is to compare three upper age limits for the calculation of PYLL in different countries to better represent the societal loss due to deaths from COVID-19. The selection of countries for this study was based on the availability of data on age-specific number of deaths, which is required for the calculation of PYLL [12].

Based on records of cases, deaths, and case fatality ratios (CFRs; Table 1), the following countries were initially selected: the US, China, Spain, Italy, France, and Germany. The latest data were extracted until 30 May 2020. Countries having data for age-specific number of deaths, which is the most important component for calculating PYLL, were included in the analyses. Three countries (China, Spain, and France) were excluded because of the unavailability of the required data at the time of the study. In addition to the US, Italy, and Germany, New York State, being the most severely impacted state within the US, was analyzed separately and compared with that of other countries.

2.3. Calculation of Age-Specific Mortality and PYLL

Age-specific mortality rates were calculated by dividing the number of deaths in each age group by the total deaths of all ages. The formula for calculating PYLL, as proposed by Romeder and McWhinnie in 1977 is as follows [12]:
In the above formula, ai = remaining years of life until the upper limit of age (in this case, 70 years); di = number of observed deaths in each class interval; i = the mid-point of the class interval of each age group, and 0.5 is a constant.
First, the remaining years of life were calculated for each age group, by subtracting the mid-point of class interval and the constant number of 0.5 from the upper age limit. For example, the mid-point of the class interval of 1–4 years is 2.5. Taking age 70 as the upper limit, the remaining years of life = 70 − 2.5 − 0.5 = 67.
PYLLs were calculated for each age group and for the three upper age limits of 70, 75, and 80 years. The selection of ages 70 and 75 years was based on previous reports [16,17]. In this study, age 80 was used as a new upper age limit based on the current life expectancy in most developed countries [18]. The total PYLL is the summation of all age-specific PYLLs.

PYLL rates for the three upper age limits were calculated using the population of the country (or the state population for New York) as the denominator. For standardization, the population of Italy, being the lowest of the three-country populations, was selected as the reference in this study. All rates were expressed per 100,000. Any methodological issues were discussed.

This is the first study to demonstrate life-expectancy-adjusted PYLL in estimating the burden of mortality and a societal loss of manpower in a major disaster such as COVID-19. This study validates the importance of measuring PYLL across populations in a disastrous situation where many people die prematurely. In addition, this study validates that the standardized measurement of PYLL is essential when the measurement is applied to compare across countries or different populations [16].

Based on our study findings, the revised formula, using an upper age limit of 80, measured the societal loss in terms of PYLL more precisely, as compared to using ages 70 and 75 as the upper limit. The findings of this study suggest that a standardized PYLL, using a reference population, is a better measure of premature life lost when cross-country data are compared. The research is innovative, and it can be applied in a disaster situation such as COVID-19. The revised formula should be further applied in assessing health system performances of countries when addressing major killer diseases, and in assessing risk and potential health needs in any future epidemic conditions.

The authors appreciate Timothy McGrath at Massachusetts Institute of Technology, Cambridge, Massachusetts, for reviewing the manuscript. 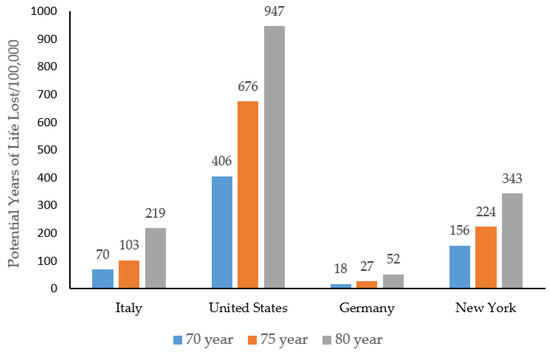 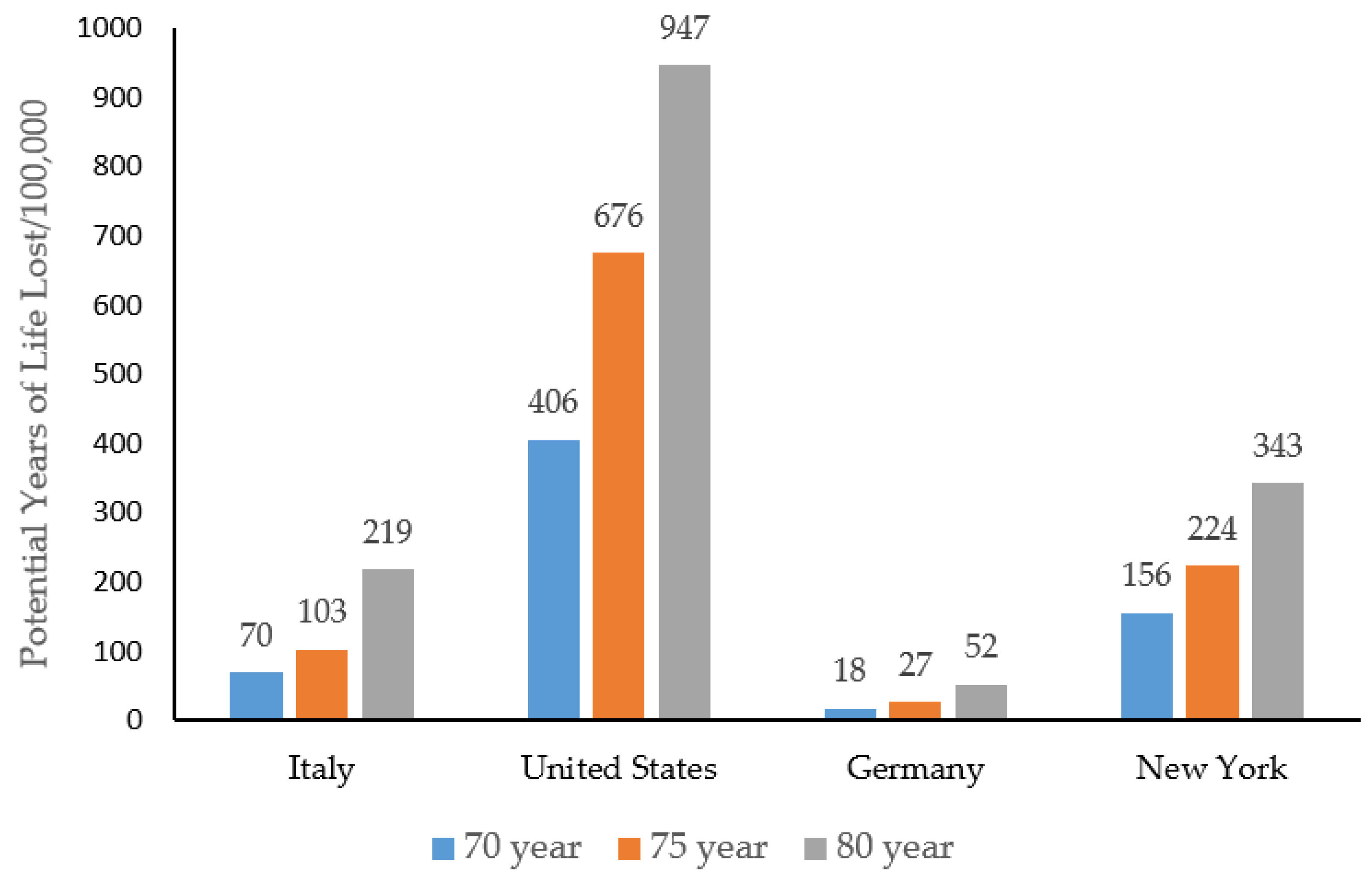