The survey was conducted in one prefecture in the province of Guizhou, a relatively poor province in the southwest of China, ranked 29 out of 34 Chinese provinces in terms of per capita GDP in the year 2016.
The sampling protocol was as follow. First, one county was randomly chosen within the sample prefecture. Second, from a list of all townships in the sample county that was obtained from the local regulatory authority, one township was randomly chosen. The randomization was undertaken in both stages of selection by using the random number generator. Finally, in each of the township’s nine villages, a list of registered births was obtained from the local official; according to the sample size calculated for a randomized controlled trial, all households with children aged 6–24 months were enrolled.
The ethical assessment of the study (No. IRB00001052-17056) was approved by the Peking University Institutional Review Board (PU IRB), Beijing, China. The purpose of the study was explained to the parents or the caregivers of all of the children, and then verbal informed consent was obtained from them.

Prior to the 2017 fieldwork, 39 college students were trained as staff members to assess the developments of sample children, and to interview the child’s primary caregiver who takes primary responsibility for the child’s daily care. All staff members were unaware of the study hypotheses to prevent any bias during the interviews. The 39 staff members were divided into two groups. As shown in Figure A1, one group (15 staff members) was trained step by step to build the proficiency in the Bayley Scales of Infant Development (BSID) test, and the other group (24 staff members) was trained in collecting information on home environment, demographic characteristics and socioeconomic status. Both groups were trained intensively for eight hours per day for seven consecutive days to ensure that they consistently understood the survey and were able to administer it in a standardized way.
During and after the fieldwork, quality control approaches such as a triple-check system (self-check, intragroup check, team leader check) and carefully designed logic jumps were implemented. First, at the proposal stage, the research protocols and questionnaires were carefully developed. Second, pretesting was conducted around the sample areas to offer the team an opportunity to identify important questions for the study and to revise the logic jumps in the questionnaire. Additionally, during the process of data collection, self-check and crosschecking was conducted at the staff member level before the staff members left the sample village, and special investigations were also routinely conducted by the team. In the fieldwork, trained staff members made a 90–120 min long home visit when the primary caregiver and the child were both present.
In the survey, the following instruments were used:

(1)
Demographic and socioeconomic survey. This questionnaire was administered to the primary caregivers in each sample household to collect data on detailed demographic and socioeconomic characteristics, including the child’s gender, the child’s age in months, whether the child had a low birth weight, whether the child was premature, the primary caregiver’s age, the primary caregiver’s education, and whether the child’s parents are at home or migrant workers. If both of the child’s parents were migrant workers, the household was labelled as a “parental migration” household. This questionnaire had been used previously and validated in the Chinese population [2].
(2)
Bayley Scales of Infant Development version III (BSID-III). Designed by Bayley [18], the BSID-III test is a standardized instrument to assess a child ‘s development during age 0–3 [19]. To allow for a standardized development assessment, the test takes into account each child’s age and whether the child was premature. Four scales are included in the test to evaluate the child’s cognitive, language, motor, and social-emotional development. These scales have been formally adapted to the language and the environment context, and have been used in a couple of studies in rural areas of China [2]. In addition, the scales have been checked for reliability in the Chinese population, and the reliability coefficents are larger than 0.8 for all of these scales [20], which indicates that the reliability is adequate [21]. The cognitive, language, and motor scores depend on the number of of tasks that the child could successfully complete [19], while the social-emotional score is based on the caregivers’ responses to a series of questions developed from the Greenspan Social-Emotional Growth Chart [22]. Higher scores correspond to better development. The trained staff members used a standardized set of play materials and a detailed scoring sheet to administer the test. The caregiver was present but not allowed to help the child in completing the tasks.
(3)
Home Observation Measurement of the Environment (HOME). Designed by Bradley et al. [23], the HOME inventory is a widely used tool to access the quality of home environment for children. The primary caregiver was asked to complete a questionnaire that was adapted from the HOME in the context of the Chinese language and environment to assess the home environment. No item was removed from the original tool. As shown in Table A1, the questionnaire includes 43 binary-choice items in six subscales: caregiver responsivity, acceptance, organization, learning materials, caregiver involvement, and variety of stimulation. The Cronbach’s alpha reliability coefficients for the scales are between 0.7 and 0.9, indicating that the internal consistency is adequate in the sample [21]. The scores of the relevant items was summed up to calculate the total score of the scales. The higher total score is, the quality of home environment is better.

In order to examine the mediation effect of home environment on the relationship between parental migration and a child’s development outcomes, the following mediation model was used: where is child i’s cognitive, language, motor, and social-emotional score in the BSID-III test; is the dummy denoting parental migration; is the total score of HOME in household i; refers to covariates on other socioeconomic characteristics, including the child’s gender, the child’s age, whether the child had a low birth weight, whether the child was premature, the caregiver’s age, and the caregiver’s education; refers to the village fixed effects; and is the random error term. The standard errors were clustered at the village level. indicates the direct effect of parental migration on the child’s development outcomes, and the product term indicates the indirect effect through the home environment. Statistical analyses were performed by using the Stata 15.0 software and the statistical program for mediation effect modeling (medeff package, the version released in 2011).
Following Preacher and Hayes [24], the bootstrap method based on resampling with 1000 replications was used to compute standard errors (S. E.) of the indirect effects. Three types of 95% confidence intervals (CIs), including the percentile CI, the bias-corrected (BC) CI, and the bias-corrected and accelerated (BCa) CI, were calculated to test the statistical significance of the indirect effects [25]. The indirect effect is considered statistically significant if the CI does not contain zero.

All 446 households invited to participate agreed to do so. However, two sample households did not finish the interview, culminating in a total of 444 sample households in the analysis.
Table 1 reports the descriptive statistics of the sample. The mean ± SD of children’s cognitive, language, motor, and social-emotional scores in the sample are 94.5 ± 16.2, 89.8 ± 13.7, 95.4 ± 15.8, and 85.4 ± 11.9, respectively. In a healthy children population, the mean scores are expected to be 105 ± 9.6, 109 ± 12.3, 107 ± 14, and 100 ± 15 for the cognitive, language, motor, and social-emotional scales [2], respectively.
In terms of socioeconomic characteristics, about 50% of children were “left behind” as both of their parents migrate out to urban areas. A total of 60% of the children were male. Children were slightly less than 15 months old on average. Seven percent of children had low birth weight. Nine percent of children were born prematurely. The caregivers were around 39 years old, and completed less than five years of schooling on average.

3.2. The Mediation Effects of Home Environment

This paper explored the interrelationships between parental migration, home environment, and child’s early development outcomes in rural China. Parental migration was negatively and significantly associated with child’s language development, but not directly correlated with child’s cognitive, motor, and social-emotional development. In addition, home environment was the significant channel across parental migration and child’s development outcomes. Furthermore, different dimensions of home environment played different roles in the links between parental migration and development outcomes. Learning material was a strong mediator, which had significant mediation effects on a child’s four outcomes, while organization of stimulating activities worked as a significant mediator only for a child’s language and motor development.
Given that early child development exerts vital impacts not only on one’s lifelong welfare, such as physical health [26,27], earnings [28,29], social mobility [30], and other wellbeing in the adulthood [31,32], but also on the country’s long-term economic growth [33], the main finding of this paper indicates that the large percentage of parental migration could be detrimental to child development in rural China and, thus, might explain the developmental delays of children in these areas, at least partly.
In addition, the findings strongly suggest the mediator role of home environment in the relationship between parental migration and child development. Households without parents present as primary caregivers provide a poorer home environment to children, which is accompanied by worse child development outcomes. This is consistent with a growing body of studies that have summarized rich evidence about the importance of the home environment, i.e., that a high-quality early home environment significantly contributes to the better abilities, personality, and behaviors of children [34,35].
Furthermore, the finding shows the heterogeneity across various dimensions of the home environment. On the one hand, in terms of material investments, rural households invest very few learning materials in child, which in turn leads to negative impacts on children’s development outcomes [36,37]. In contrast to households in which parents are present to act as primary caregivers, households with parental migration invest in less learning materials for children. The decrease in material investments is a strong channel linked to inferior development outcomes including cognition, language, motor, and social-emotion skills. On the other hand, in terms of time investments, stimulating caregiver-child interactions are productive inputs for child outcomes, as documented by previous studies in developed countries [38,39] and in rural areas of China [17,40,41]. Households with parental migration perform worse in the organization of the stimulating activities, which is also negatively correlated with the child’s language and motor development.
In some provinces of China, such as Shaanxi [42], Hebei, and Yunnan Provinces [43], several parenting intervention programs have been initiated to improve early child development of rural children. These programs have seen an increase in children’s development outcomes by 0.23–0.27 SD in treatment households. The findings of this paper indicate that the improvement in home environment could be a key channel between parenting intervention and children’s development outcomes. Furthermore, the findings suggest the necessary implications in terms of targets on home environment for future interventions.
A strength of the study was to recruit individuals from rural households of western China. As shown in Wang et al. [2], in the four major subpopulations of rural China, 53% of the children were male on average; children were around 16 months old on average; and 6% of children were born prematurely. The demographic characteristics of the sample children in this paper are comparable to the populations of other communities of rural China. However, the study also faces some limitations. The data was collected in western rural China; thus the conclusions cannot simply be applied to other developing contexts. Moreover, although OLS estimates are indeed useful to understand the interrelationships of parental migration, home environment, and child development, it is worth noting that the results do not state causal effects. Furthermore, even though having a considerable number of staff members to collect data was also a limitation of the study, they were well trained through a rigorous process.

The team would like to gratefully acknowledge the cooperation of this study’s participants. 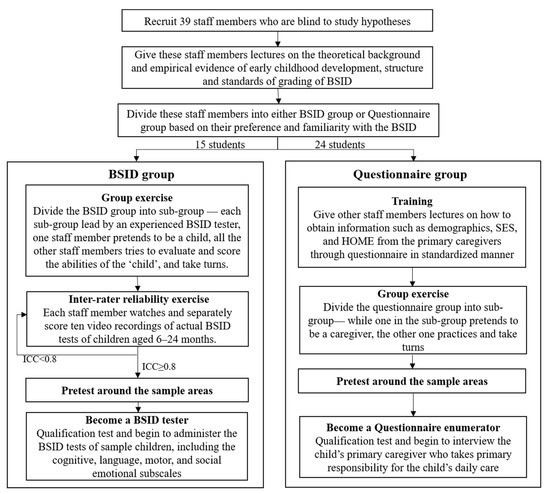