Knowledge, Attitude and Practices towards the Tiger Mosquito Aedes Albopictus. A Questionnaire Based Survey in Lazio Region (Italy) before the 2017 Chikungunya Outbreak
Previous Article in Journal

Surveillance of a Pest Through a Public Health Information System: The Case of the Blackfly (Simulium erythrocephalum) in Zaragoza (Spain) during 2009–2015

Background: Animals and people in many Spanish regions are increasingly being affected by blackfly bites in the last decade. Because of blackflies, the city of Zaragoza has become in recent years a paradigm of discomfort in Europe, with thousands of citizens affected. The OMI-AP system (Stacks, Barcelona, Spain) implemented by the Government of Aragón, a software that manages the electronic medical history of all patients, has been evaluated in order to document the increase of insect bite recorded by the primary care consultations in Zaragoza after the first outbreak of blackflies occurred in 2011. Methods: An observational, ecological and longitudinal study of insect bites recorded at the primary care consultations was carried out in primary care during the period 2009–2015. Results: The incidence of medical consultations by insect bites in Basic Health Areas (BHA) near to rivers is higher than the furthest BHA. Rural BHA are more affected by insect bites than the urban ones. The increase of medical assistance due to insect bites in Zaragoza since 2011 is correlated with the blackflies bites. Conclusions: This tool was very useful to describe the initial stage of this public health problem. It could be used for guiding public health responses in terms of surveillance and management of this pest. View Full-Text
Keywords: insect bites; OMI-AP; outbreak; primary care; simuliidae; Simulium erythrocephalum insect bites; OMI-AP; outbreak; primary care; simuliidae; Simulium erythrocephalum
►▼ Show Figures 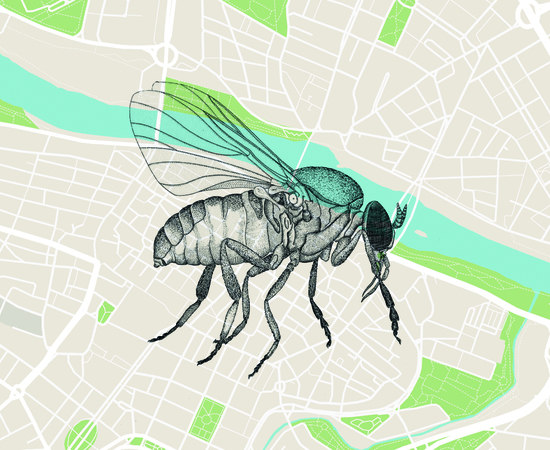 
Ruiz-Arrondo, Ignacio, José A. Oteo, Javier Lucientes, Ana Muniesa, and Ignacio de Blas. 2020. "Surveillance of a Pest Through a Public Health Information System: The Case of the Blackfly (Simulium erythrocephalum) in Zaragoza (Spain) during 2009–2015" International Journal of Environmental Research and Public Health 17, no. 10: 3734. https://doi.org/10.3390/ijerph17103734