High prevalence of child underweight and stunting in high-altitude areas has often been reported. However, most previous studies on this topic were cross-sectional. Another critical concern is that using the World Health Organization (WHO) Child Growth Standards to evaluate child growth in high-altitude areas may lead to overestimations of underweight and stunting. Our study aimed to evaluate the long-term growth pattern of children (3 to 18 years) above the altitude of 3500 m in Ladakh, India. The participants’ body weight (BW), body height (BH), and body mass index (BMI) were measured annually according to the WHO Child Growth Standards for children under 5 years old and the WHO reference data for children aged 5 to 19 years. The generalized estimating equation (GEE) was used to estimate the means and z-scores of BW, BH, and BMI at different ages. A total of 401 children were enrolled from 2012 to 2018. Their mean z-scores of BW, BH, and BMI were −1.47, −1.44, and −0.85 in 2012 and increased to −0.74, −0.92, and −0.63 in 2018. This population’s specific growth curve was also depicted, which generally fell below the 85th percentile of the WHO standards. This is the first cohort study about long-term child growth patterns in a high-altitude area. The detailed underlying mechanisms of our findings need future research on more representative data of high-altitude populations. View Full-Text
Keywords: child growth; growth curve; high altitude; body weight; body height child growth; growth curve; high altitude; body weight; body height
►▼ Show Figures 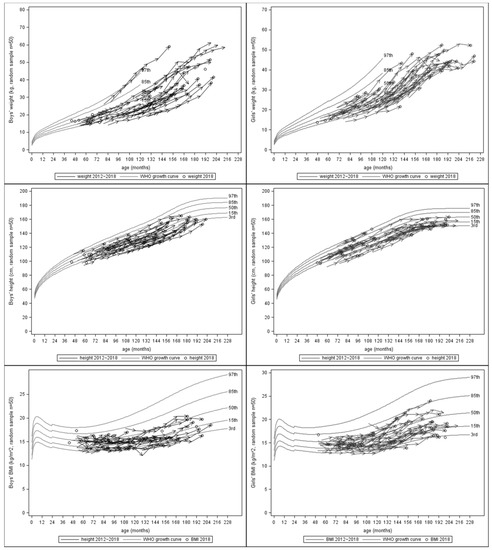