The Contribution of Spanish Science to Patents: Medicine as Case of Study
Previous Article in Journal

Housing adaptation is recognized as an effective intervention for successful independent living and has been given a greater political priority. However, the current adaptation implementation is fragmented and sometimes confusing. This study is aimed at examining blockages in the adaptation system in the United Kingdom (UK) and identifying practical ways to tackle them. It adopted a mixed-method sequential explanatory research strategy. A questionnaire survey was first conducted in all local authorities in England, Scotland and Wales. This was followed by individual interviews and a focus group with professionals and older clients. The study found that multiple organizations are involved during the delivery of housing adaptations; poor cooperation between them is a major barrier to a seamless service. The adaptation process involves five key stages; there are many inconsistencies and inequities in the process across local authorities. Significant delays are found at all stages, the average length of time taken to complete an adaptation is unacceptably long. There are also many inconsistencies and inequities across different local authorities. This study identified some common deficiencies, which cause inefficiencies and ineffectiveness in housing adaptation practices and makes some recommendations on specific actions that need to be taken at both national and local levels to address them. View Full-Text
Keywords: housing adaptation; older people; aging in place; environmental gerontology housing adaptation; older people; aging in place; environmental gerontology
►▼ Show Figures 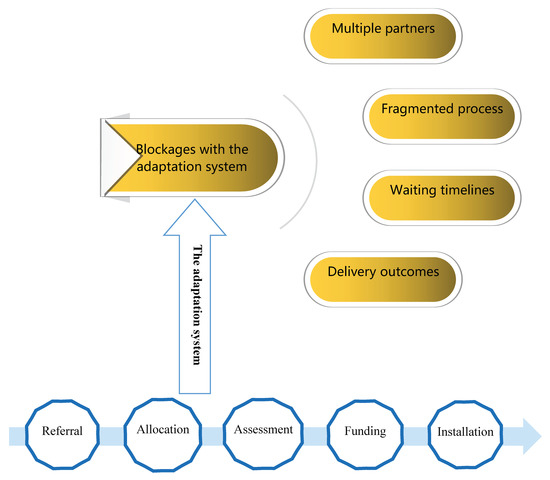