A Comparative Study on Adolescents’ Health Literacy in Europe: Findings from the HBSC Study

(1) Background: There is a need for studies on population-level health literacy (HL) to identify the current state of HL within and between countries. We report comparative findings from 10 European countries (Austria, Belgium (Fl), Czechia, England, Estonia, Finland, Germany, Macedonia, Poland, and Slovakia) on adolescents’ HL and its associations with gender, family affluence (FAS), and self-rated health (SRH). (2) Methods: Representative data (N = 14,590; age 15) were drawn from the HBSC (Health Behavior in School-Aged Children) study. The associations between HL, gender, FAS, and SRH were examined via path models. (3) Results: The countries exhibited differences in HL means and in the range of scores within countries. Positive associations were found between FAS and HL, and between HL and SRH in each country. Gender was associated with differences in HL in only three countries. HL acted as a mediator between gender and SRH in four countries, and between FAS and SRH in each country. (4) Conclusions: The findings confirm that there are differences in HL levels within and between European countries, and that HL does contribute to differences in SRH. HL should be taken into account when devising evidence-informed policies and interventions to promote the health of adolescents.
Keywords: health literacy; adolescent; self-rated health; comparative study health literacy; adolescent; self-rated health; comparative study

In its most recent policy document, the World Health Organization [1] has emphasized the need to monitor health literacy (HL) in order to identify the current state of HL in various population groups. This will provide a starting point for data-driven policies, and for practical interventions targeted at HL development. HL has been recognized as a critical determinant of health, and as a contributory factor to empowerment and equity [2].
HL has been defined [3] as a competence to “gain access to, understand and use information in ways which promote and maintain good health.” As applied to adolescents, it explains differences in health and serves as a mediator between several structural stratifiers and health indicators [4]. Since HL can be developed, it can undoubtedly act as a way of addressing adolescents’ health disparities, which tend to track forward to adulthood [5]. It is also linked to power gained through knowledge [6], with a potential for empowerment and autonomy [1].
So far, there have been relatively few comparative studies on population-level HL in various countries. One of the few studies in the field is that of Sorensen and colleagues [7], who compared adults’ HL in eight different European countries (mean age 43.3–48.7 [8]). They found that HL levels differed between countries and subgroups. Weak health literacy (i.e., in the limited category) varied from 28.7% (Netherlands) to 62.1% (Bulgaria). This category was more prevalent among people with low affluence and those with a lower level of education, among men and older people, and among people with a greater use of healthcare services. The study showed that HL deficit is a definite problem in Europe, and it confirmed that some subgroups were more likely than others to exhibit an unacceptably low level of HL.
The importance of HL in understanding health disparities has been acknowledged [9]. However, not much is known about how it might explain differences in adolescents’ health or how it might mediate between various structural stratifiers and health indicators (such as self-rated health) in various countries using a comparative approach. Nationally conducted studies have shown that higher HL is more common among various categories, including girls [10], children from more affluent families [10,11,12], those with higher school achievement [10,12], and those with the motivation to learn health issues [11]. Furthermore, higher HL has been associated with better self-rated health [13,14]. There are clear public health issues involved in understanding how differences in self-rated health operate, as either a subjective indicator of general health, or as a robust measure of it [15,16]. Self-rated health has been linked to a number of phenomena, including mortality and morbidity, functional ability, and physical and mental symptoms [17]. Studies have shown that certain factors—such as one’s childhood socioeconomic position—appear to explain adolescents’ self-rated health independently, and continue to do so later in their lives [18].
In a longitudinal study, Bauldry et al. [18] found that certain factors, including various risk behaviors, mediated the relationship between background factors and self-rated health throughout the follow-up years. They concluded that, as early as possible, efforts should be targeted at those mediating mechanisms that generate disparities in health. It would be reasonable to expect that HL in particular would act as a mediator between background factors (such as family affluence or gender) and health (self-rated or objectively measured). So far, no longitudinal studies have addressed this directly, but in a cross-sectional study, Paakkari et al. [4] were able to show that adolescents’ health literacy did indeed serve as a mediator between family affluence and self-rated health. The link between poor self-rated health and low HL has also been detected among adults [7,12,19].
The aim of this paper is to report the first comparative findings from 10 European countries, using data from the Health Behavior in School-aged Children (HBSC) survey. The more specific research questions for this study were (see also Figure 1)

Cross-sectional data from the Health Behavior in School-Aged Children (HBSC) study (collected in 2017–2018) were used. HBSC is a collaborative study with World Health Organization. The data for it are collected every four years using a standardized research protocol in all participating countries, meaning that all the countries share the same mandatory questions and follow the same sampling and data collection procedures. In addition, each country may select optional questions to be included within its national survey. This paper reports the findings from the 10 countries (Austria, Belgium (Fl), Czechia, England, Estonia, Finland, Germany, Macedonia, Poland, and Slovakia) who selected the Health Literacy for School-Aged Children (HLSAC) instrument as an optional package for inclusion in their national survey. The data used in this study consisted of, in total, 14,590 15-year-old pupils (boys: N = 7087; girls: N = 7503).
Each country obtained ethical approval, and depending on the country, active or passive consent was asked from the students and their guardians. Participation in the study was entirely voluntary and anonymous. More detailed information on the methodology of the HBSC study can be found elsewhere [20].

Self-reported gender and an indirect measure of family wealth (family affluence, FAS III [21]) were used as independent variables. FAS III (six items) includes questions on number of cars, having one’s own bedroom, number of computers, number of bathrooms, having a dishwasher, and number of family vacations abroad. In line with Inchley et al. [22] (p. 17), the scale was applied “to assess the relative affluence of the families by comparing the individual’s summary score from the FAS to all other scores in the respective country/region” and “to identify groups of young people in the lowest 20% (low affluence), middle 60% (medium affluence) and highest 20% (high affluence).” The FAS variable with three categories was used in the analyses.
A brief 10-item Health Literacy for School-Aged Children (HLSAC) instrument, validated for 13 and 15-year olds [14,23] was used to measure the adolescents’ subjective (self-reported) HL. HLSAC was developed on an understanding of HL as a set of competencies to promote and sustain health, and to identify and influence the factors that affect health. The items focused on five competence areas (two items each): theoretical knowledge, practical knowledge or skills, critical thinking, self-awareness, and citizenship. All the items took the form I am confident that… and the response options were (1) not at all true, (2) not quite true, (3) somewhat true, and (4) absolutely true. A sum-score was generated from the responses to the 10 items; hence the range in total was 10–40. This continuous variable was used in all analyses. In addition, for descriptive purposes, the levels of HL were classified into three groups with scores 10–25 indicating low HL, scores 26–35 moderate HL, and scores 36–40 high HL [10] (see Figure 2). Findings on the reliability and validity of the scale are thoroughly reported in our previous work [14,23]. Cronbach alpha is reported to be included in cross-national data .85 [14] (Paakkari et al., 2019). Self-rated health (SRH) was used as a dependent variable, and was measured by a single item [24]; here the question took the form Would you say your health is… and the response options were poor, fair, good, and excellent.

The differences in HL between the countries were inspected via a univariate analysis of variance (with Bonferroni correction for pairwise comparisons). Research questions 2–4 were examined using path modelling (Figure 1) with the maximum likelihood estimator. The hierarchical structure of the sample (children nested in classrooms) was taken into account by correcting the standard error estimates as necessary, using the COMPLEX option provided by Mplus (version 8.3).

3.2. Associations of Gender and Family Affluence with HL, and of HL with Self-Rated Health (RQ2–3)

Table 2 shows the correlation coefficients between the measures for each country, and Supplementary Materials File 1 reports the descriptive statistics of gender, FAS, and SRH. Model 1 examined whether FAS and gender explained the variance in HL. It suggested significant associations between FAS and HL in each country, with higher FAS being associated with higher HL. The standardized path estimates varied between 0.09 and 0.16, suggesting that 0.8–2.6% of the HL variance was explained by FAS. By contrast, gender was significantly associated with differences in HL (with girls showing higher HL) only in Estonia (β = 0.10, R2 = 1%), Macedonia (βn= 0.06, R2 = 3.6%), and Poland (β = 0.10, R2 = 1%).
Next, Model 2 was constructed to estimate the effect of HL on SRH (RQ3). A significant (p < 0.001) positive association was found in each country. The path estimates varied between 0.12 and 0.27, suggesting that 1.4–7.3% of the SRH variance was explained by HL.

3.3. HL as a Mediator between Gender, Family Affluence, and Self-Rated Health (RQ4)

In order to examine the mediating effect of HL, we first fitted a model in which gender and FAS explained variance in SRH directly (Table 3, Models 3 and 4). In the final model (Model 5) with HL as mediator the direct gender effect on SRH remained significant in all the participating countries, explaining 1.2–3.2% of the SRH variance. Boys had slightly higher SRH than girls (expressed as minus scores in Table 3). The direct effects of FAS on SRH remained, and were partially mediated by HL. FAS explained 0.1–2.0% of the variance, and was significant in six countries (Belgium, Czechia, England, Estonia, Finland, and Germany).
Finally, indirect effects were examined (with HL as a mediator between gender/FAS and SRH). A significant indirect effect from gender to SRH through HL was found in Estonia, Finland, Macedonia, and Poland. There was also a positive indirect effect from FAS to SRH through HL in each participant country; however, the indirect effects were weak.

This study offers the first comparative findings on adolescents’ health literacy levels in the European region. Despite the limited number of factors studied, the findings do appear to support Trezona et al. [9] in viewing health literacy as “a convenient way of describing a measurable variable that can be used to understand and explain variation in health.” One can anticipate that the findings of this research together with suggestions for future research, will lead to a fuller understanding of the current status of health literacy among adolescents in Europe, with possibilities for more evidence-informed policies in the region.

The research was funded by Juho Vainio Foundation, Academy of Finland (#276239), the Scientific Grant Agency of the Ministry of Education Science, Research and Sport of the Slovak Republic and the Slovak Academy of Sciences (#1/0427/17), and the European Regional Development Fund-Project "Effective Use of Social Research Studies for Practice " (#CZ.02.1.01/0.0/0.0/16_025/0007294), the Technology Agency of the Czech Republic (ÉTA TL01000335) and the Ministry of Education, Youth and Sports (Czech Republic), Inter-Excellence LTT18020. 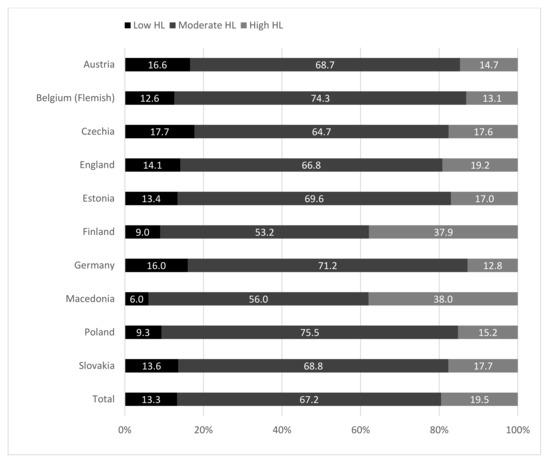 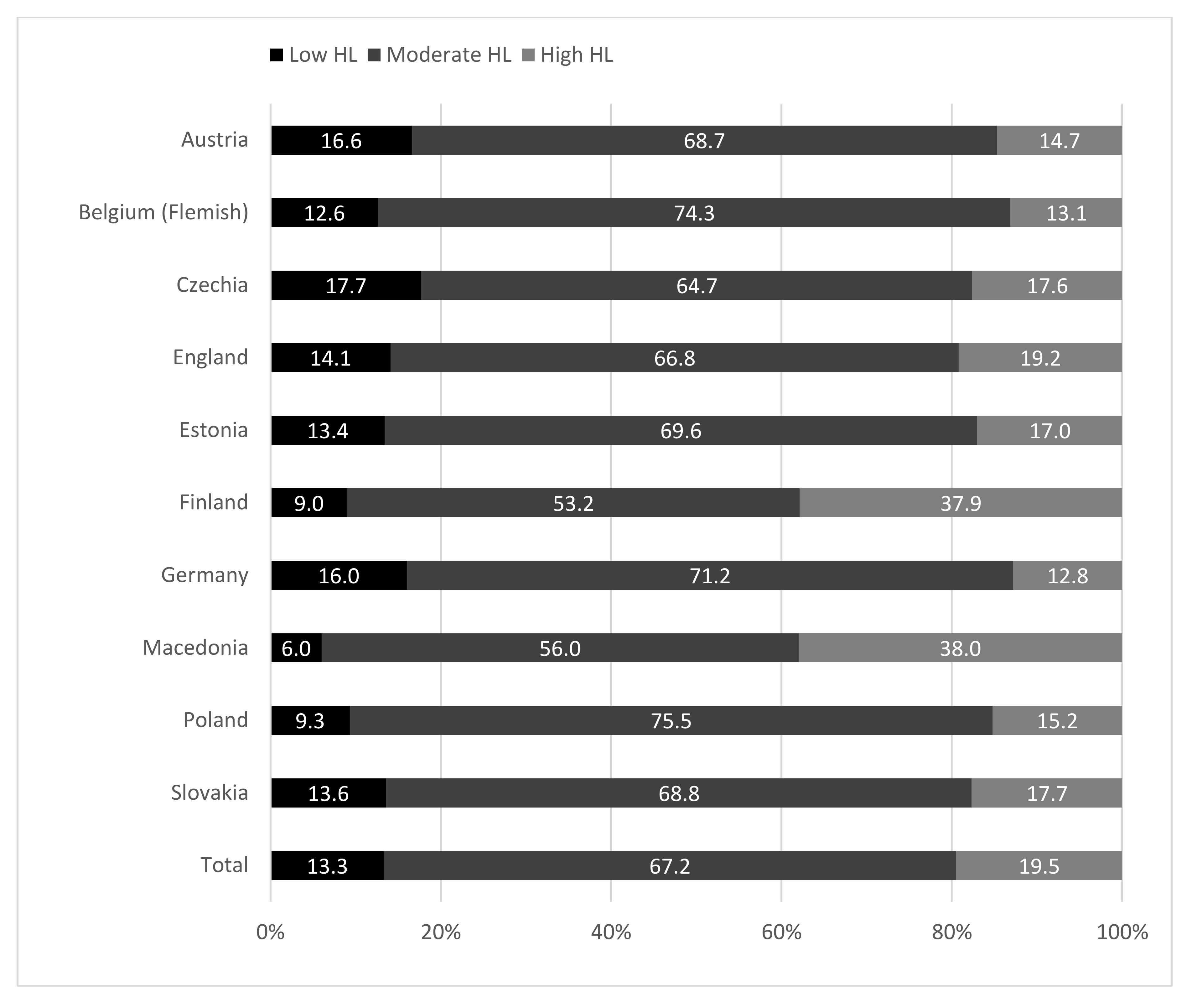