Italian Public Health Response to the COVID-19 Pandemic: Case Report from the Field, Insights and Challenges for the Department of Prevention
Previous Article in Journal

Regional Disparities in the Decline of Anemia and Remaining Challenges among Children in Tanzania: Analyses of the Tanzania Demographic and Health Survey 2004–2015
Previous Article in Special Issue

This paper investigates whether the Severe Acute Respiratory Syndrome CoronaVirus 2 (SARS-CoV-2) pandemic could have been favored by specific weather conditions and other factors. It is found that the 2020 winter weather in the region of Wuhan (Hubei, Central China)—where the virus first broke out in December and spread widely from January to February 2020—was strikingly similar to that of the Northern Italian provinces of Milan, Brescia and Bergamo, where the pandemic broke out from February to March. The statistical analysis was extended to cover the United States of America, which overtook Italy and China as the country with the highest number of confirmed COronaVIrus Disease 19 (COVID-19) cases, and then to the entire world. The found correlation patterns suggest that the COVID-19 lethality significantly worsens (4 times on average) under weather temperatures between 4 °C and 12 °C and relative humidity between 60% and 80%. Possible co-factors such as median population age and air pollution were also investigated suggesting an important influence of the former but not of the latter, at least, on a synoptic scale. Based on these results, specific isotherm world maps were generated to locate, month by month, the world regions that share similar temperature ranges. From February to March, the 4–12 °C isotherm zone extended mostly from Central China toward Iran, Turkey, West-Mediterranean Europe (Italy, Spain and France) up to the United State of America, optimally coinciding with the geographic regions most affected by the pandemic from February to March. It is predicted that in the spring, as the weather gets warm, the pandemic will likely worsen in northern regions (United Kingdom, Germany, East Europe, Russia and North America) while the situation will likely improve in the southern regions (Italy and Spain). However, in autumn, the pandemic could come back and affect the same regions again. The Tropical Zone and the entire Southern Hemisphere, but in restricted colder southern regions, could avoid a strong pandemic because of the sufficiently warm weather during the entire year and because of the lower median age of their population. Google-Earth-Pro interactive-maps covering the entire world are provided as supplementary files. View Full-Text
Keywords: SARS-CoV-2; COVID-19; pandemic geographical distribution; epidemic forecasting; weather conditions; climatic zones; air pollution; population median age SARS-CoV-2; COVID-19; pandemic geographical distribution; epidemic forecasting; weather conditions; climatic zones; air pollution; population median age
►▼ Show Figures 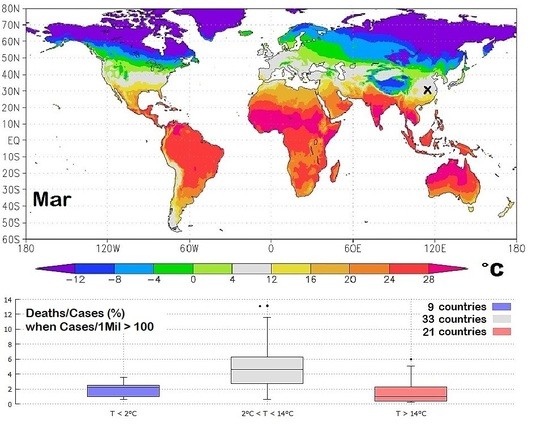 
Scafetta N. Distribution of the SARS-CoV-2 Pandemic and Its Monthly Forecast Based on Seasonal Climate Patterns. International Journal of Environmental Research and Public Health. 2020; 17(10):3493.