This preliminarily study was made to examine the differences in sweat excretions from human eccrine and apocrine sweat glands in dynamic exercise and heat conditions. Sweat samples were collected from six young males while they were either running on a treadmill or sitting in a sauna cabinet. Sweat samples of at least 5 mL from the eccrine (upper−back) and apocrine (armpit) sweat glands were collected during a 20−min running (or inactive overheating) period. The samples were then analyzed for urea, uric acid, and electrolyte (Na+, Cl−, and K+) excretions. The results from a two−way repeated−measures analysis of variance (ANOVA) revealed that the secretions of urea and K+ were significantly higher during running than during inactive overheating for both glands, as were Na+ secretions for the apocrine glands (all P < 0.05). Under the same sweating conditions, urea and K+ excretions from the apocrine glands were also higher than those from the eccrine glands (all P < 0.05). Significant differences were observed between the Na+ secretions of the apocrine and eccrine glands under the running condition. The effects of various sweating methods and sweat glands on Cl− secretions were nonsignificant, and little uric acid was excreted. A higher urea excretion level during running rather than in hot conditions could be attributed to an elevated metabolic rate. View Full-Text
Keywords: analysis of variance (ANOVA); apocrine sweat gland; dynamic exercise; eccrine sweat gland; heat environment analysis of variance (ANOVA); apocrine sweat gland; dynamic exercise; eccrine sweat gland; heat environment
►▼ Show Figures 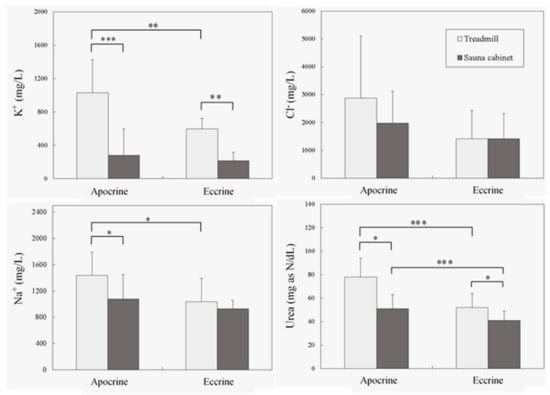 
Chen, Yi-Lang, Wen-Hui Kuan, and Chao-Lin Liu. 2020. "Comparative Study of the Composition of Sweat from Eccrine and Apocrine Sweat Glands during Exercise and in Heat" International Journal of Environmental Research and Public Health 17, no. 10: 3377. https://doi.org/10.3390/ijerph17103377