The “national meeting effect” refers to worse patient outcomes when medical professionals attend academic meetings and hospitals have reduced staffing. The aim of this study was to examine differences in outcomes of patients with out-of-hospital cardiac arrest (OHCA) admitted during, before, and after meeting days according to meeting location and considering regional variation of outcomes, which has not been investigated in previous studies. Using data from a nationwide, prospective, population-based, observational study in Japan, we analyzed adult OHCA patients who underwent resuscitation attempts between 2011 and 2015. Favorable one-month neurological outcomes were compared among patients admitted during the relevant annual meeting dates of three national scientific societies, those admitted on identical days the week before, and those one week after the meeting dates. We developed a multivariate logistic regression model after adjusting for confounding factors, including meeting location and regional variation (better vs. worse outcome areas), using the “during meeting days” group as the reference. A total of 40,849 patients were included in the study, with 14,490, 13,518, and 12,841 patients hospitalized during, before, and after meeting days, respectively. The rates of favorable neurological outcomes during, before, and after meeting days was 1.7, 1.6, and 1.8%, respectively. After adjusting for covariates, favorable neurological outcomes did not differ among the three groups (adjusted OR (95% CI) of the before and after meeting dates groups was 1.03 (0.83–1.28) and 1.01 (0.81–1.26), respectively. The “national meeting effect” did not exist in OHCA patients in Japan, even after comparing data during, before, and after meeting dates and considering meeting location and regional variation. View Full-Text
Keywords: out-of-hospital cardiac arrest; outcome; national meeting; cardiopulmonary resuscitation out-of-hospital cardiac arrest; outcome; national meeting; cardiopulmonary resuscitation
►▼ Show Figures 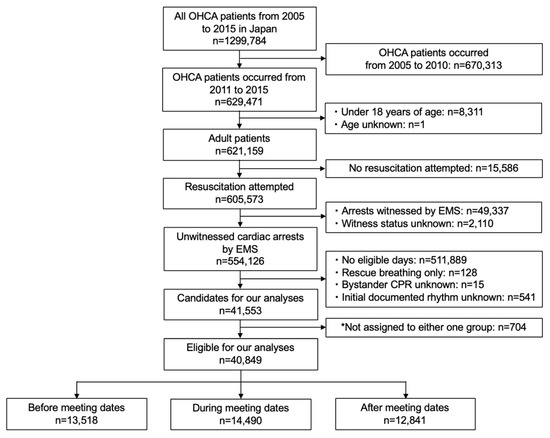