Job rotation is an organizational strategy based on the systematic exchange of workers between jobs in a planned manner according to specific criteria. This study presents the GS-Rot method, a method based on Game Theory, in order to design job rotation schedules by considering not only workers’ job preferences, but also the competencies required for different jobs. With this approach, we promote workers’ active participation in the design of the rotation plan. It also let us deal with restrictions in assigning workers to job positions according to their disabilities (temporal or permanent). The GS-Rot method has been implemented online and applied to a case in a work environment characterized by the presence of a high repetition of movements, which is a significant risk factor associated with work-related musculoskeletal disorders (WMSDs). A total of 17 workstations and 17 workers were involved in the rotation, four of them with physical/psychological limitations. Feasible job rotation schedules were obtained in a short time (average time 27.4 milliseconds). The results indicate that in the rotations driven by preference priorities, almost all the workers (94.11%) were assigned to one of their top five preferences. Likewise, 48.52% of job positions were assigned to workers in their top five of their competence lists. When jobs were assigned according to competence, 58.82% of workers got an assignment among their top five competence lists. Furthermore, 55.87% of the workers achieved jobs in their top five preferences. In both rotation scenarios, the workers varied performed jobs, and fatigue accumulation was balanced among them. The GS-Rot method achieved feasible and uniform solutions regarding the workers’ exposure to job repetitiveness. View Full-Text
Keywords: job rotation; preferences; competencies; ergonomics; Gale-Shapley method; game-theory; musculoskeletal disorders job rotation; preferences; competencies; ergonomics; Gale-Shapley method; game-theory; musculoskeletal disorders
►▼ Show Figures 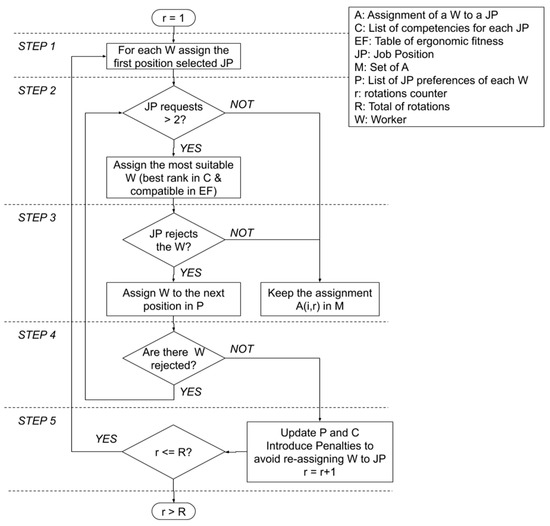