Neighborhood Walkability in Relation to Knee and Low Back Pain in Older People: A Multilevel Cross-Sectional Study from the JAGES
Next Article in Special Issue

Analysis of Runoff Trends and Drivers in the Haihe River Basin, China
Previous Article in Journal

Effects of Climate Change and Maternal Morality: Perspective from Case Studies in the Rural Area of Bangladesh
Previous Article in Special Issue

Estimating the Responses of Hydrological and Sedimental Processes to Future Climate Change in Watersheds with Different Landscapes in the Yellow River Basin, China

Just a few decades ago, Adyar River in India’s city of Chennai was an important source of water for various uses. Due to local and global changes (e.g., population growth and climate change), its ecosystem and overall water quality, including its aesthetic value, has deteriorated, and the water has become unsuitable for commercial uses. Adverse impacts of excessive population and changing climate are expected to continue in the future. Thus, this study focused on predicting the future water quality of the Adyar river under “business as usual” (BAU) and “suitable with measures” scenarios. The water evaluation and planning (WEAP) simulation tool was used for this study. Water quality simulation along a 19 km stretch of the Adyar River, from downstream of the Chembarambakkam to Adyar (Bay of Bengal) was carried out. In this analysis, clear indication of further deterioration of Adyar water quality by 2030 under the BAU scenario was evidenced. This would be rendering the river unsuitable for many aquatic species. Due to both climate change (i.e., increased temperature and precipitation) and population growth, the WEAP model results indicated that by 2030, biochemical oxygen demand (BOD) and Escherichia coli concentrations will increase by 26.7% and 8.3%, respectively. On the other hand, under the scenario with measures being taken, which assumes that “all wastewater generated locally will be collected and treated in WWTP with a capacity of 886 million liter per day (MLD),” the river water quality is expected to significantly improve by 2030. Specifically, the model results showed largely reduced concentrations of BOD and E. coli, respectively, to the tune of 74.2% and 98.4% compared to the BAU scenario. However, even under the scenario with measures being taken, water quality remains a concern, especially in the downstream area, when compared with class B (fishable surface water quality desirable by the national government). These results indicate that the current management policies and near future water resources management plan (i.e., the scenario including mitigating measures) are not adequate to check pollution levels to within the desirable limits. Thus, there is a need for transdisciplinary research into how the water quality can be further improved (e.g., through ecosystem restoration or river rehabilitation). View Full-Text
Keywords: BOD; Escherichia coli; river pollution; wastewater management; water quality modelling; Chennai BOD; Escherichia coli; river pollution; wastewater management; water quality modelling; Chennai
►▼ Show Figures 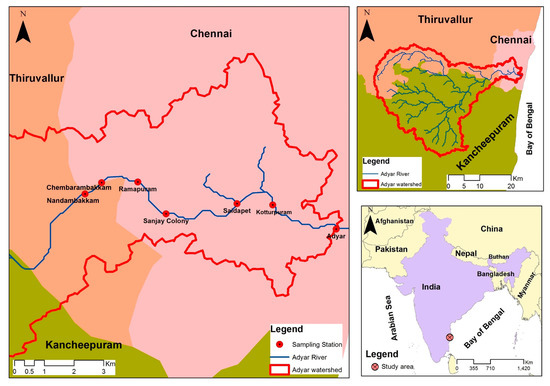