Impaired Eating and Swallowing Function in Older Adults in the Community: The Kurihara Project

Autism spectrum disorder (ASD) is a neurodevelopmental disorder characterized by communication and interaction difficulties as well as repeated and stereotyped behaviors and interests [1]. Approximately 66 million individuals worldwide have ASD, and it has been reported to begin early in life [2,3,4].
Although the exact cause of ASD is unknown, genetic factors are key contributors. Further, various environmental factors are involved and are considered an important aspect of the increased prevalence of ASD [5,6,7]. Rapid industrialization and the consequent environmental pollution have also increased the risk of exposure to toxic substances via various pathways. Since ASD occurs early in life, studies have reported that toxic exposure, such as mercury poisoning in the prenatal or childhood period, could cause ASD [8]. Therefore, infant mercury poisoning caused by seafood consumption by the mother, pediatric vaccination, and prenatal use of antibiotics has been suggested to cause ASD [9]. Moreover, studies have reported that pre- [10,11,12] and postnatal exposure to antibiotics and acetaminophen increases the ASD risk [13,14,15,16].
Although antibiotics are essential for treating some diseases, antibiotic exposure has been associated with various diseases. Antibiotic use can cause abnormal changes in the human microbiome. Studies have suggested that when the altered microbiome is passed onto the fetus, it increases the risk of colitis and ASD by impeding neurological development [13,17,18,19]. Further, antibiotic exposure has been reported to be weakly associated with the risk for ASD [10]; however, this association cannot be clearly established given the difficulty of measuring fetal antibiotic exposure. Studies have also reported that postnatal antibiotic exposure is associated with ASD; specifically, postnatal use of acetaminophen and antibiotics, as well as ear infection, were reported to increase the risk for ASD [16].
This indicates that despite continued studies on the association between ASD and antibiotics, a definitive conclusion is yet to be reached. Particularly, the lack of consensus on pre- and postnatal antibiotic exposure has hindered efforts toward determining this relationship. Therefore, we aimed to conduct two-side meta-analyses to clearly determine the relationship between ASD and antibiotic use as well as present foundational data for preventive and management strategies for lowering the ASD risk.

This meta-analysis was performed in accordance with the PRISMA guidelines [20] and was approved by the institutional review board of Gachon University (1044396-201909-HR-160-01). We searched PubMed, Embase, Web of Science, and Cochrane Library databases for all relevant studies written in English and published before February 2019. The search terms used were (antibiotic* OR antimicrob*) and (autism* OR ASD OR kanner syndrome OR PDD OR pervasive developmental disorder). For meta-analysis, we included studies that reported the association between ASD and pre- or postnatal antibiotic exposure in childhood and excluded studies that did not report the antibiotic exposure level as well as the ASD and control group. We included observational studies, including case-control, cross-sectional, and cohort studies and excluded commentary, editorial, and review articles.

All authors independently screened and selected relevant data, and any disagreements were resolved by discussion. We extracted relevant data, including first author, publication year, study design, country, sample size, age of participants, and related outcomes. Moreover, to assess the association between ASD and pre- or postnatal antibiotic exposure in childhood, we extracted all measurement data including prevalence data of patients with ASD and controls group as well as the number and amount of pre- and postnatal antibiotic exposure. The risk estimates of ASD in antibiotic exposure and the standardized mean difference (SMD) of antibiotic exposure in ASD were analyzed via meta-analysis using the Comprehensive Meta-Analysis software version 3 (Biostat Inc., Englewood, NJ, USA). We assessed the heterogeneity using the Q statistic and I2 method, while the random-effects model was applied in all analyses to address heterogeneity. Subgroup analyses were performed based on group differences in prenatal and postnatal exposure. Publication bias was assessed using funnel plots and Egger’s intercept. p < 0.05 indicated a significant difference. Furthermore, for quality assessment, we used the Newcastle–Ottawa Scale (NOS) to assess the methodological quality of the nine included studies [21,22]. The NOS is a representative tool developed for meta-analysis of non-randomized comparative studies, including case-control, cross-sectional, and cohort studies. It comprises an adjustment item with the selection of study groups, comparability of the groups, and determination of either the exposure or outcome of interest to evaluate the quality of articles included in the meta-analyses.

3.1. Characteristics of the Studies

We initially identified 1877 studies (Figure 1), and after the elimination of duplicates using the Endnote reference database, 1459 studies remained. We excluded 1348 articles based on the titles and 60 articles based on the abstract, and thus were left with 51 articles that were eligible for full-text screening. After close review, 42 publications were excluded because of lack of usable data and failure to meet the inclusion criteria. Finally, a total of nine articles were identified and included in the meta-analysis. Table 1 shows the characteristics of the nine selected studies, which were published between 2007 and 2019. Moreover, regarding study design, there were 5, 1, and 3 case-control, cross-sectional, and cohort studies, respectively. The subjects ranged from 27 to 949,821. All studies were performed in the USA, Denmark, Italy, Lebanon, Canada, and Sweden. The age of the subjects ranged from birth to 18 years. The outcomes of the nine studies were only described as related content regarding ASD and antibiotic usage. In addition, the quality scores ranged from 5 to 8.

To assess the association between ASD and antibiotic exposure in children, we analyzed differences in antibiotic exposure between the ASD and control groups. Meta-analysis results showed significantly increased early antibiotic exposure, including pre- and postnatal, in children with ASD (SMD = 0.406, 95% CI: 0.045–0.768, p = 0.028) (Figure 3A). Further, there was obvious heterogeneity in the included studies (I2 = 99.26); therefore, we applied a random-effects model to the analysis. The funnel plots and Egger’s test did not give significant results (p = 0.67), indicating no publication bias. In the subgroup analyses, prenatal antibiotic exposure was significantly increased in children with ASD (SMD = 0.219, 95% CI: 0.012–0.426, p = 0.038) with moderate heterogeneity (I2 = 54.97) (Figure 2B). However, as shown in Figure 3C, there was no significant difference in the postnatal antibiotic exposure between children with ASD and controls (SMD = 0.479, 95% CI: −0.029 to 0.986, p = 0.064, I2 = 99.53). As shown in Figure 3, there was significant heterogeneity across all studies; therefore, a random-effects model was performed. Furthermore, the funnel plots and Egger’s test performed for all studies did not show statistical significance (Figure 3A; p = 0.67. Figure 3B; p = 0.50, Figure 3C; p = 0.67), indicating no publication bias.

This work was supported by the National Research Foundation of Korea (NRF) grant funded by the Korea government (MSIP: Ministry of Science, ICT & Future Planning) (2017R1C1B5017938). 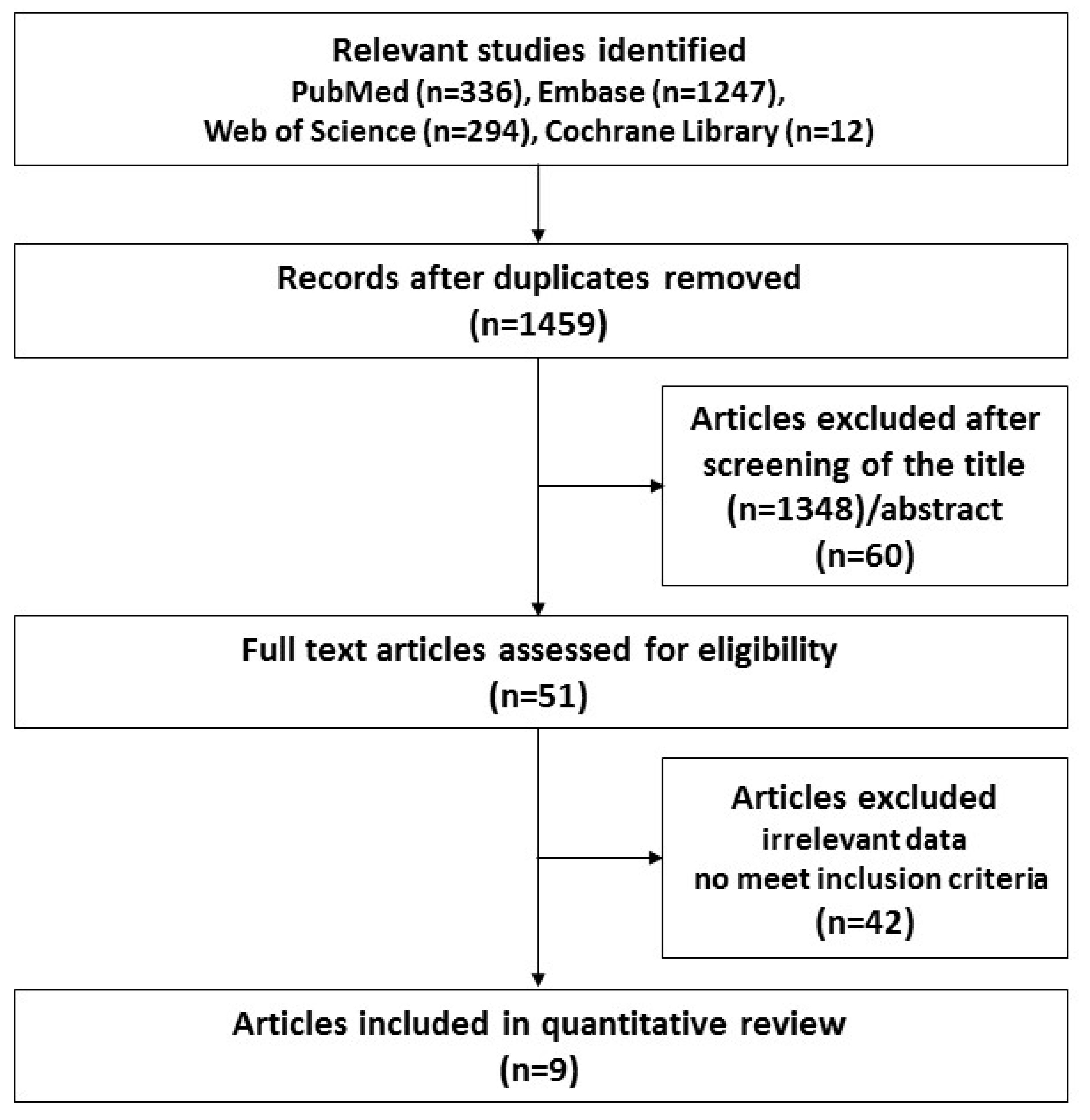 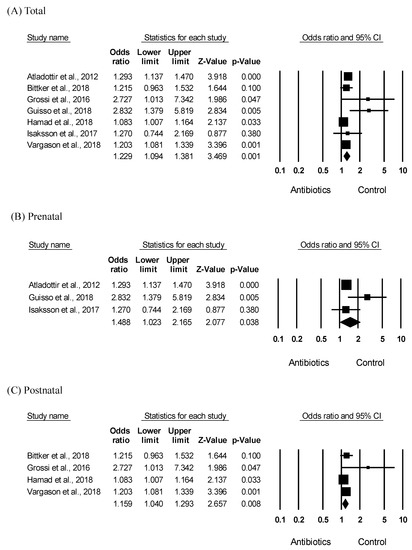 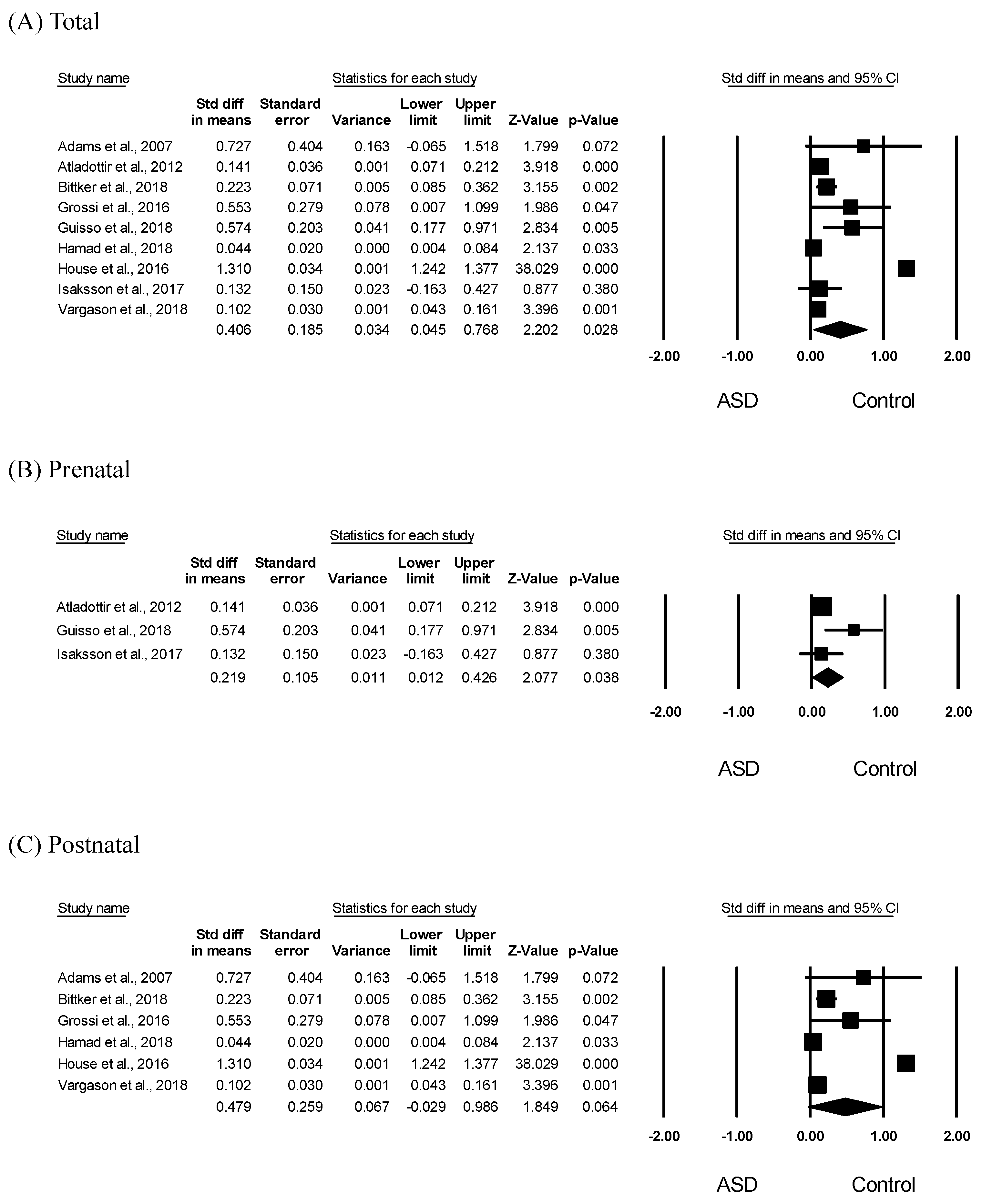