Integrating Geospatial Data and Measures of Disability and Wealth to Assess Inequalities in an Eye Health Survey: An Example from the Indian Sunderbans
Previous Article in Journal

Cataract Services are Leaving Widows Behind: Examples from National Cross-Sectional Surveys in Nigeria and Sri Lanka

In 2015 most governments of the world signed the United Nation’s Sustainable Development Goals (SDGs), which make a fundamental commitment to “leave no one behind” and include a goal to “ensure healthy lives and promote wellbeing for all at all ages” [1]. To translate the SDGs into effective action for health, population subgroups who experience the worst health need to be identified and strategies adopted to meet the needs of those who are furthest behind.
In terms of health, women are disproportionately found among those who have been left behind. Throughout the world women experience overt and unconscious bias from their households, communities, and societies, reducing their ability to exercise their right to health [2]. Certain subgroups of women are particularly vulnerable to poor health in different contexts, such as women from poorer households, and those marginalized due to their marital status, age, or physical ability [3].
For eye health, the experiences of older women are particularly relevant, with cataract being a leading cause of reduced functional ability with aging [4,5]. Women are more likely than men to develop some types of cataract [6], but over and above biological causes, the higher prevalence of cataract blindness in women [7] is likely due to women experiencing higher exposure to known risk factors than men, such as biomass cooking [8] and childbearing [9,10], as well as lower access to [11] and poorer quality of [12] cataract surgical services.
Beyond biological changes, older age also involves changes in roles and social position, including increased reliance on adult children [4]. In many low- and middle-income countries, elderly people undergoing cataract surgery rely on social support from their children to access services, and in studies in India [13] and Tanzania [14], women have reported more difficulty than men to negotiate this family support. Social support is rarely measured in eye health research. Marriage is the primary social relationship for many adults, and while being married is not universally beneficial to health, married people are assumed to have higher levels of support and material resources than people without a spouse [3,15]. In this study we define not-married as being without a living spouse, and include those who were widowed, divorced, separated, and never married. Due to longer life expectancy, women are more likely than men to be widowed, and in some societies are less likely to remarry than widowed men [3]. Therefore, women are more likely than men to experience the social and health consequences of widowhood. Indeed, a recent community survey of cataract blind people in Nigeria found 53% of women blind from cataract were not married, compared to only 6% of men blind from cataract [16].
The aim of this study was to explore the hypothesis that not-married women experience a disproportionate amount of cataract blindness and poorer cataract services indicators than other population subgroups.

The following descriptive outcome variables were used:
Explanatory variables were marital status (married versus not-married (widowed, divorced, separated or never married)), and area of residence (urban versus rural). We included area of residence in addition to marital status, as urban dwellers often experience better access to services. We did not disaggregate further by socio-economic status, as subgroups became too small.

The proportion of participants who were not-married was calculated for women and men in each country, and the distribution of marital status across 10-year age groups of women and men was plotted.
Women and men were disaggregated by marital status and area of residence simultaneously, and cataract blindness, CSC, eCSC, and 95% CIs were calculated for the eight subgroups generated (i.e., urban married, urban not-married, rural married, rural not-married, for both women and men) (Supplemental Table S1).
The social distribution of cataract blindness across the eight subgroups was examined using bar graphs, with bar width reflecting the proportion of the sample in each subgroup. Finally, CSC and eCSC and their 95% CIs for the eight subgroups were plotted for each country.
Analyses were conducted using STATA 12.0 (StataCorp, College Station, TX, USA). Statistical significance was implied by 95% confidence intervals which did not overlap.

We have explored the distribution of cataract blindness and cataract service outcomes across sex, marital status, and area of residence, and identified that more support is indicated for rural people without a spouse—many more of whom are women—if equity is to be achieved. We urge eye health researchers, service providers, and planners to collect and monitor indicators of social support, including marital status, and then implement targeted interventions to ensure no one is left behind.

J.R. is a Commonwealth Rutherford Fellow, funded by the UK government through the Commonwealth Scholarship Commission in the UK.

The authors declare no conflict of interest. The funders of the surveys had no role in the design, execution, interpretation, or writing of the study. 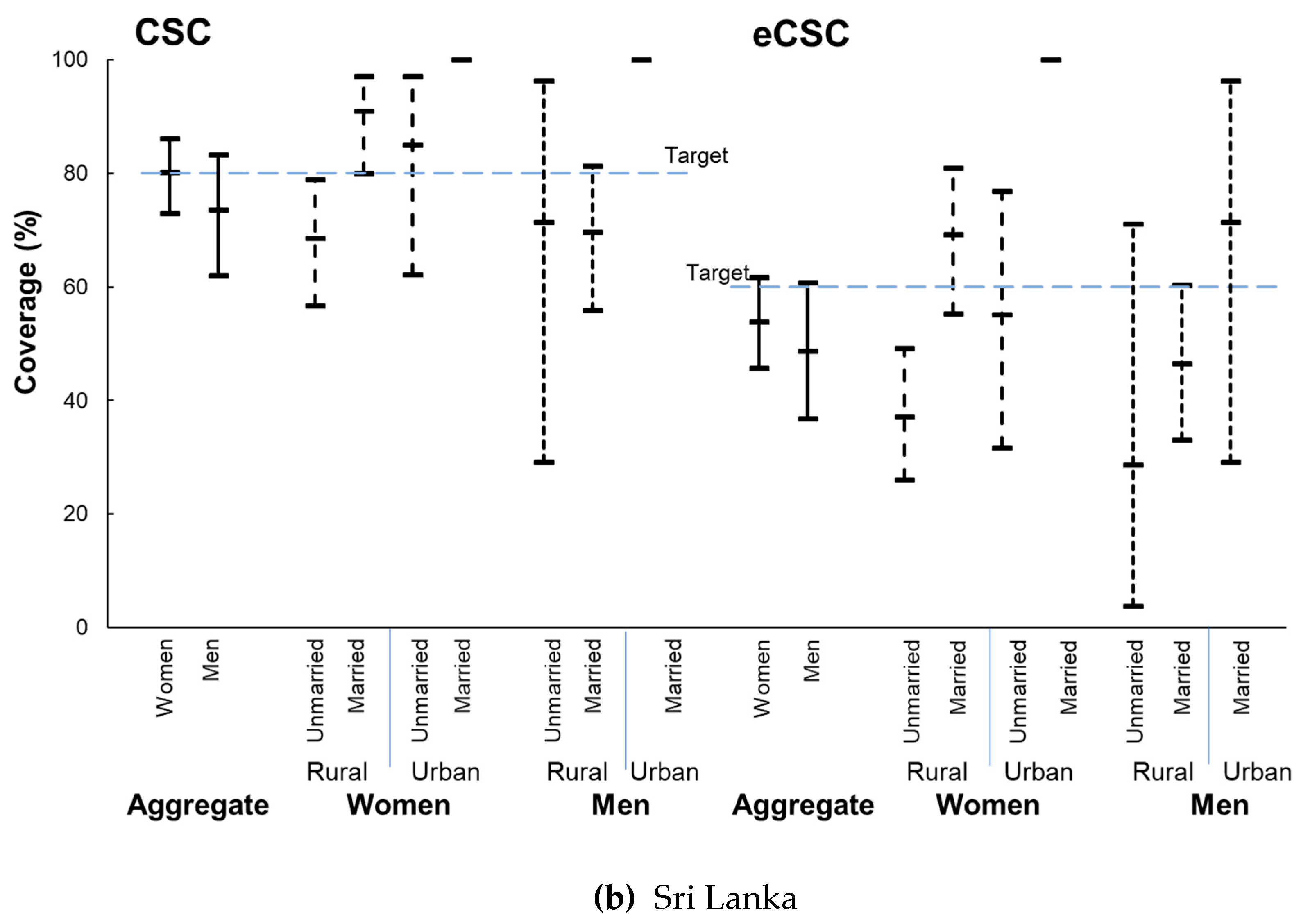