Obesity, which is a metabolic disease, is generally considered to be associated with heredity, behavior, environment, and so on. The prevalence of obesity is continuing to increase at an alarming rate and has nearly tripled in the last 40 years [1]. In 2016, the prevalence of obesity among adults was 13% and the morbidity of overweight adults was 39% worldwide. The overweight and obesity rates among children and adolescents rose from 4% in 1975 to 18% in 2016 [2].
Studies have shown that obesity can affect paternal reproduction [3]. According to clinical experiments, the sperm count or motility are decreased and sperm DNA is damaged in men who are obese or overweight compared to men with normal BMI [4,5]. Studies have also shown that secondary (hypogonadotropic) hypogonadism (SH) in obese men will develop even without organic damage at the hypothalamic-pituitary axis [6,7]. The association between obesity and male SH are complex. It has recently been reported that there is a causal relationship between obesity and serum testosterone in men [8]. There is evidence showing that testosterone is indispensable for development of testis during puberty and maintenance of spermatogenesis in adults. The junction between Sertoli cells and cohesion between Sertoli and spermatogenic cells depends on testosterone. Reduced testosterone may contribute to SH in obese males [9]. Leptin derived from adipocytes is a key factor in regulating energy balance, the immune system, and reproduction. It has been shown that leptin regulates male reproduction by stimulating the hypothalamic-pituitary-gonadal (HPG) axis and that its level is significantly higher in obese males compared to normal weight males [10]. We have shown that a high leptin level contributes to decreasing the content of testosterone in the testis of obese mice [11].
Obesity has an adverse effect on male reproduction. Compared with normal people, the sperm count and motility are decreased in obesity man [4,5]. Our prior study also showed that obesity was related to male infertility [11]. Some studies and our prior study considered that oxidative stress may play the most important role [11,12] and that oxidative stress induced by obesity damages male reproduction maybe through superoxide generation, oxidative phosphorylation, and so on [13,14,15]. Therefore, an antioxidant substance may provide a protective effect on the damage induced by obesity.
Autophagy (programmed cell death type II), which is evolutionarily highly conserved, has a very important role in the maintenance of intracellular homeostasis by forming autophagosomes which then fuse with the lysosomal membrane to degrade the cytosolic components by hydrolytic enzymes [16]. Autophagy has an important effect on heat-induced spermatogenesis damage [17]. Knockout of autophagy-related gene 7 (Atg7) in murine germ cells results in male infertility [18]. Mice raised by a high-fat diet (HFD) have increased formation of autophagosomes [19]. HFD-induced spermatogenesis deficiency is mediated by autophagy and ameliorated by inhibition of the autophagic process [20].
Sulforaphane (SFN) (Figure 1) is an edible isothiocyanate that was generated in cruciferous plants, for example, cabbage, kale, cauliflower, and broccoli. There is evidence supporting the notion that SFNs can protect reproductive systems from the damage induced by di-N-butylphthalate (DBP) in pubertal mice [21]. Yang et al. [22] reported that SFN intervention can prevent the damage induced by cadmium in the reproduction of mice through the inhibition of oxidative stress mediated by the Nrf2/ARE signaling pathway. However, it is unknown whether SFN can protect mice from the injury to male reproduction caused by obesity. Thus, we determined the effects of SFN on the injury to male reproduction caused by obesity and evaluated the possible underlying mechanism.

C57BL/6J mice (Male, 4 or 5 weeks old) were obtained from Experimental Animal Center, Shenyang Pharmaceutical University, Shenyang, China. Animal use has been approved by Animal Use and Care Committee at Shenyang Pharmaceutical University (SYPU-IACUC-C2017-10-26-101). Mice were acclimated in the new environment at least one week before the beginning of this research. The mice were housed in controlled conditions of temperatures from 22 °C to 26 °C, 12 h light/dark cycle, and relative humidity of 40–60% and approached diet and water freely. All experiments and surgical procedures were carried out in accordance with the National Institute of Health Guide for the Care and Use of Laboratory Animals. All efforts were made to minimize animal suffering and to reduce the number of specimens used.

The control diet (3.85 kcal/g, n = 10) consisted of 10% fat-originated calories, 20% of protein-originated calories, and 70% of carbohydrate-originated calories. The HFD (n = 120) containing 45% kcal from fat was constituted of 73% standard chow diet, 20% lard, and 7% casein (Aoboxing Biotech Company Ltd., Beijing, China) and multiple trace vitamins [23]. Body weight of all mice was measured once a week.

As Levin et al. [24] designated, 40 mice with body weight gain (BWG) in the upper tertile after 8 weeks of an HFD were defined as DIO mice. The remaining mice were excluded from the experiment.

As depicted in Figure 2, 130 mice were acclimated for one week before the experiment and divided into two groups, as follows: ten mice were given a CON diet for 14 weeks, and the remaining 120 mice were given an HFD for eight weeks. Eight weeks later, 40 mice with BWG in the first tertile were designated as the DIO mice group. Forty DIO mice were further divided into four groups; the DIO mice were given an HFD for 6 weeks, and the other three groups were treated with both an HFD and SFN (5, 10, and 20 mg/kg; Toronto Research Chemicals, Toronto, Canada) for 6 weeks. All mice were sacrificed with ether 24 h at the end of this research.

After six weeks of administration, mice were euthanized with ether. After supine reflexion of supine position disappeared, the abdominal cavity was cut open with surgical scissors along the midline of the abdomen. The fat around the blood vessels was gently removed with small tweezers, and the extra fat covered on the blood vessels was wiped with cotton balls. Then, blood was collected from the inferior vena cava with 1-mL syringes. Blood samples were centrifuged to get sera, which were used for measuring hormone levels, including testosterone, leptin, and estradiol. Retroperitoneal fat, epididymal fat, epididymides, testes, kidneys and livers were excised after blood samples were collected and weighed. Epididymides of each mouse were excised free from fat to determine the sperm characteristics. Left testes of mice were produced as 10% homogenate to measure MDA, T-AOC, SOD, GSH, H2O2, CAT, and GSH-Px levels. Right testes of five mice in each group were excised for western blotting study. The remaining right testes were used for histological parameters.

Testes were excised from fat, instantly fixed in 4% paraformaldehyde, dehydrated in gradient ethanol, cleared in xylene, embedded in paraffin, sliced at 4-μm thickness by a rotary microtome (Leica, Buffajrove, Illinois, USA), and subsequently stained with hematoxylin-eosin (HE) staining. The sections were viewed using a microscope (Olympus, Tokyo, Japan) and photographed.

Small pieces of testicular tissue were fixed in 2.5% glutaraldehyde solubilized in 0.1 M phosphate buffer (pH 7.2), postfixed in 1% osmium tetroxide, dehydrated in a gradient ethanol, and embedded in Epon812. Ultrathin slices were stained through uranyl acetate, followed by lead citrate, then inspected on a H-600 microscope (Hitachi, Tokyo, Japan), and photographed.

Mice testes were dispersed with homogenizers in Radio Immunoprecipitation Assay (RIPA) lysis buffer (100 μL) containing 1 mmol/L protease inhibitor on ice. After that, the testes lysates were centrifuged for the supernatant. The concentration of supernatant was determined by bicinchoninic acid method under the instruction of the manufacturers’ protocol.

3.2. Effects of SFN on Reproductive Organs Index and Sperm Characteristics in Obese Mice

3.3. Effects of SFN on Testicular Histology in Obese Mice

As showed in the Figure 4, morphological analyses of the testes in the DIO mice showed that the testicular structure was aberrant but that the abnormal structure was improved by exposure to SFN. Compared with the control mice (Figure 4a), adhesion of seminiferous epithelia which were atrophied was disrupted and the arrangement of seminiferous epithelia were sparse in the obese mice (Figure 4b). After the administration of SFN, the structure of seminiferous tubules returned to normal and seminiferous epithelia were arranged tightly (Figure 4c–e).
Electron microscopy of mouse testes was performed at week 14 (Figure 5). In the control mice (Figure 5a), the morphology of Leydig cells was normal with an abundance of organelles, such as smooth and rough endoplasmic and mitochondria, observed in Leydig cells. The Leydig cells had a small number of lysosomes and lipid droplets. In the DIO mice, the number of organelles were reduced and vacuolization was inspected in the Leydig cells. Mitochondria morphology was swollen and abnormal, and the number of lipid droplets increased (Figure 5b). SFN exposure improved these abnormalities. The number of organelles increased, while the number of lipid droplets and vacuoles decreased after administration of SFN (Figure 5c–e).

3.4. Effects of SFN on Serum Hormone Levels in Obese Mice

3.5. Effects of SFN on Biochemical Parameters Related with Oxidative Stress in Obese Mice

3.6. Effects of SFN on the Protein Expression in Obese Mice

In conclusion, this research confirmed that SFN ameliorates male reproductive damage related to obesity by inhibition of oxidative stress regulated by the Nrf2/ARE signaling pathway and recovery of normal autophagy. The potential protective effect of SFN on the damage induced by obesity maybe a way to treat reproductive system disease clinically in the future.

The authors declare that there are no conflicts of interests regarding the publication of this paper. 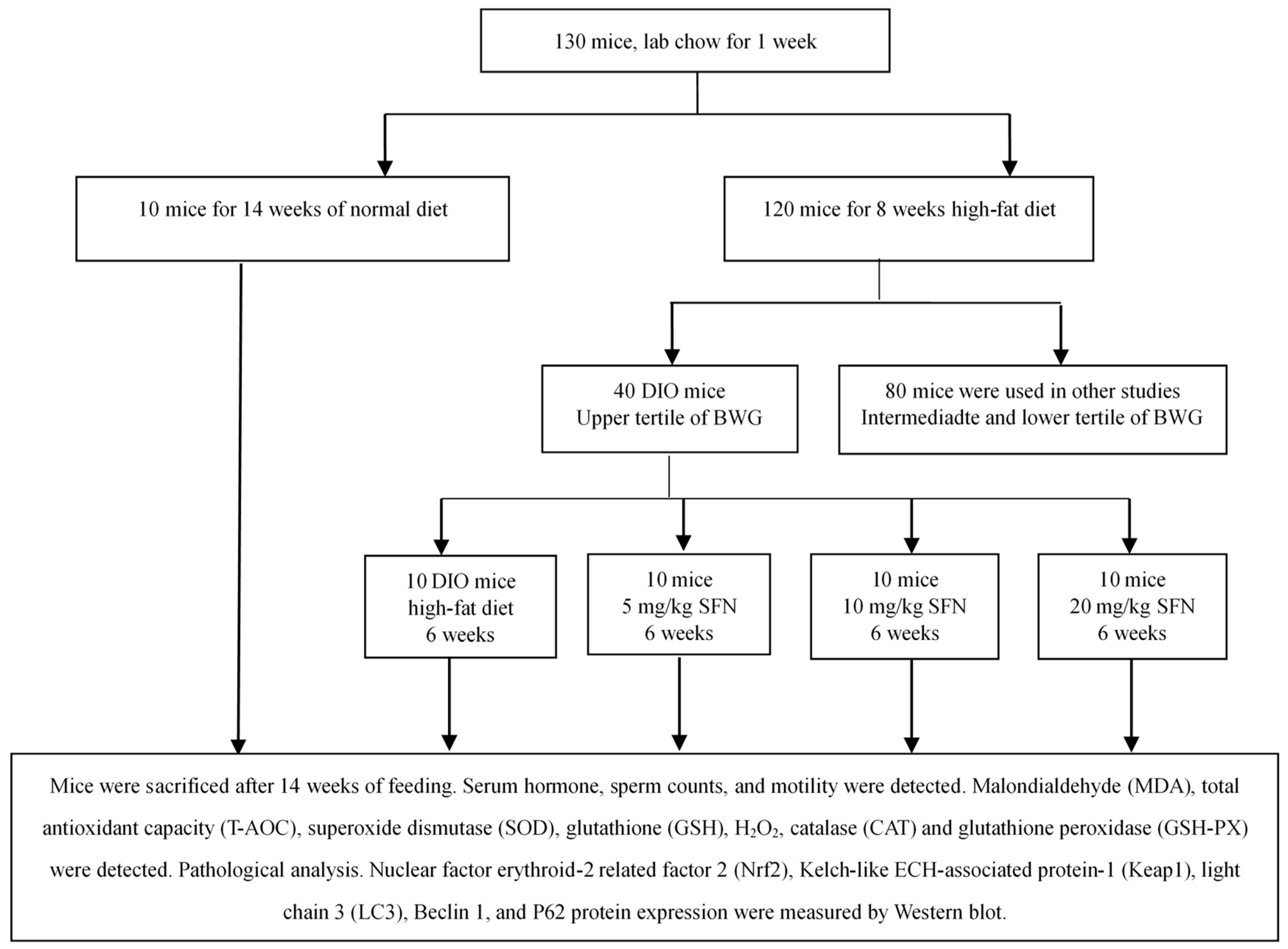 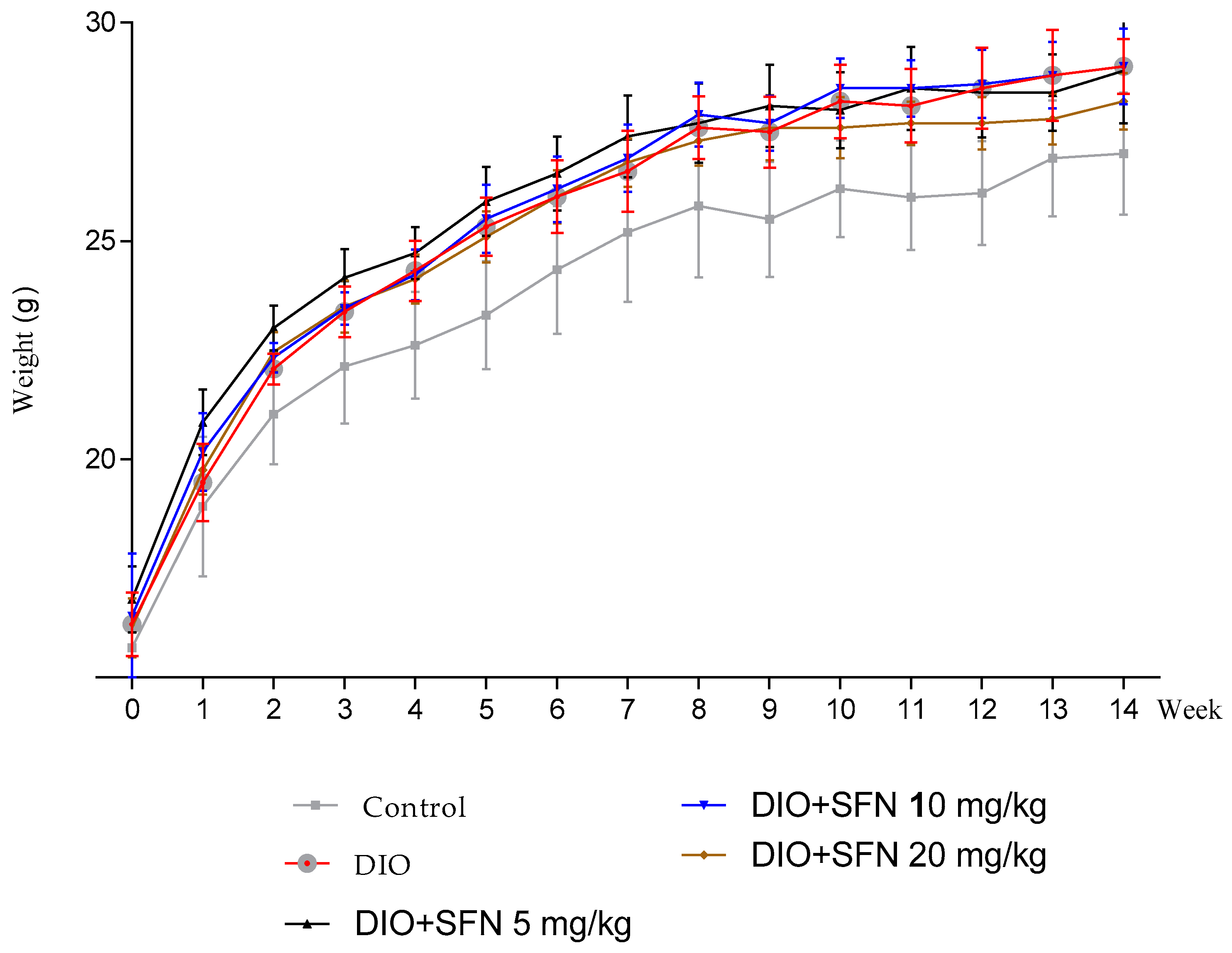