Our Healthy Clarence: A Community-Driven Wellbeing Initiative
Next Article in Special Issue

Spatial Variability in the Effect of High Ambient Temperature on Mortality: An Analysis at Municipality Level within the Greater Athens Area
Previous Article in Special Issue

Development of Subjective Well-Being in Adolescence

Despite the importance of subjective well-being (SWB) for students’ mental and physical health, there is a lack of longitudinal studies investigating the development of SWB in adolescents and what factors are associated with it over time. The present study seeks to shed further light on this question by investigating adolescents longitudinally. A sample of German academic tracks students (N = 476) from five schools were followed longitudinally over a time period of 30 months with four measurement points from Grade 11 to Grade 13. Alongside the longitudinal assessment of SWB (mood and life satisfaction), a range of other factors were also assessed at t1 including; demographic factors (sex, age, socio-economic status (HISEI)), intelligence, grades (report cards provided by the schools), personality (neuroticism, extraversion) and perceived parental expectations and support. Latent growth curve models were conducted to investigate the development of SWB and its correlates. On average, mood and life satisfaction improved at the end of mandatory schooling. However, students significantly differed in this pattern of change. Students’ life satisfaction developed more positively if students had good grades at t1. Furthermore, even though introverted students started with lower life satisfaction at t1, extraverts’ life showed greater increases over time. Changes in mood were associated with socio-economic background; the higher the HISEI the more positive the change. As social comparisons in school performance are almost inevitable, schools should intervene to buffer the influence of school grades on students’ SWB. View Full-Text
Keywords: subjective well-being; personality; parental engagement; parental expectations; intelligence; gender; socio-economic status; academic achievement subjective well-being; personality; parental engagement; parental expectations; intelligence; gender; socio-economic status; academic achievement
►▼ Show Figures 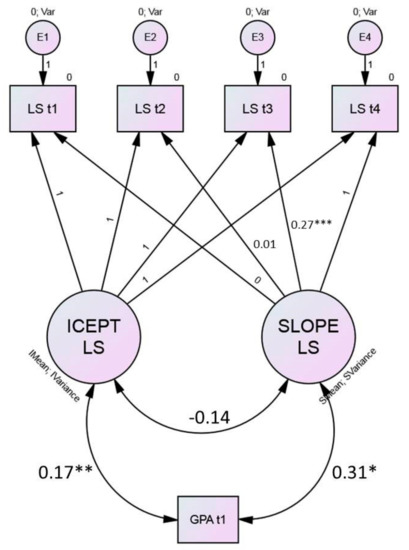