Homicide Profiles Based on Crime Scene and Victim Characteristics

One of the current trends in homicide research includes developing works based on scientific study and empirical evidence, which offer conclusions that can be used in an operational manner during police investigations. The objective of this study was to identify homicide characteristics from behaviors carried out on the crime scene and victim characteristics associated with those of the perpetrators of these crimes in Spain. The sample consisted of 448 homicide cases from the database of the Homicide Revision Project led by the Office of Coordination and Studies of the Secretary of State and Security. After creating six classification tree models, it was found that the modus operandi of the aggressor and the victim characteristics may permit hypothesizing about the demographic characteristics of the perpetrator (gender, age, and country of origin), his/her criminal record, and the type of relationship with the victim. Furthermore, the importance of the study of victimology during a criminal investigation is highlighted, as it may indirectly offer information about the potential perpetrator. The findings of this study suggest that criminal profiling contributes notably to the decision-making process to establish more rigorous suspect prioritization, improve the management of human resources and materials, and increase the efficiency of criminal investigations.
Keywords: homicide; criminal profiling; crime scene behavior; victim; classification tree homicide; criminal profiling; crime scene behavior; victim; classification tree

The Office of Coordination and Studies of the Secretary of State and Security, in collaboration with the national security forces (Civil Guard and National Police force) and several Spanish universities developed and coordinated the Homicide Revision Project. The parties responsible for this project requested the relevant reports from the corresponding police departments and created a database to permit information collection. Next, specialized training was received on how to carry out the data dump procedure, ensuring confidentiality and ethical data treatment.
Having completed the database, and with the authorization of the responsible party of the Office of Coordination and Studies of the Secretary of State and Security, the database was provided in order to carry out this study.
Then, the sample was selected, not on the basis of a probabilistic procedure but via convenience sampling, in which all available cases were analyzed, considering the exclusion criteria described above. Despite the fact that the sample would not be representative of all of the homicides taking place in Spain, it was representative of those simple homicides that had been solved by the police.
Finally, a data-cleaning process was carried out in order to thoroughly analyze the quality of the information and to prepare the matrix for statistical analysis.

In this study, Classification and Regression Trees (CART) were used, with R statistics software (package ‘rpart’) [48]. This is one of the most efficient multi-variate classification techniques of machine learning, belonging to the family of Decision Trees, whose purpose is to classify future observations on the basis of a set of rules. For this, through a sequential process, the classification variables that best differentiate the groups in relation to the dependent variable (child nodes) are identified, dividing the dataset recursively until the majority of the cases have been correctly classified into one category (terminal or leaf node) [49].
Since the variables were categorical in this study, classification trees and Gini impurity measure were used as goodness-of-fit criteria to make the data partition. Then, the tree was pruned, using a tenfold cross validation procedure to determine the optimal tree size. In this way, the tree whose complexity parameter minimized the mean error of the cross-validation (x error) was selected [16,50].
Thus, a classification tree was created for each of the perpetrator variables and for the type of relationship with the victim (offender’s sex, age, country origin, criminal record, crimes against the person, and victim–offender relationship), considering those variables related to the homicide and the victim characteristics as the classification variables (Table 1). Likewise, the minimum number of observations in the nodes was determined as 20 before partitioning the data and as 6 for the terminal nodes.
In the tree diagrams, each route, from a root node to a leaf node, represents a decision rule that characterizes a profile according to the dependent variable, such that each model offers a general view of how the relative variables of the homicide and victim characteristics interact and combine so as to discriminate between the perpetrator characteristics.

Below, the graphical representations obtained from the resulting models for the perpetrator’s gender, age, country of origin, criminal record, and victim–offender relationship are presented, with each node represented as a rectangle, colored according to the majority category of data which is included in it, specifying the probability per class of the observation in the node.

3.1.1. Classification Model for the Gender of the Perpetrator

3.1.2. Classification Model for the Age of the Perpetrator:

3.1.3. Classification Model for the Country of Origin of the Perpetrator

3.1.4. Classification Model for the Criminal Record History of the Perpetrator

3.1.5. Classification Model for the Criminal Record for Crimes Against Persons of the Perpetrator

In Figure 5, a graphical representation is shown of the model obtained for the perpetrator’s criminal record history for crimes against persons (x error = 0.931). It may be observed that the age of the victim, the type of place where the homicide took place, and the method of fleeing of the aggressor were the most important variables in determining whether or not the aggressor had a record for crimes against persons, referring to those criminal typologies that suggest violent or intimidating behavior against an individual (crimes against the life, integrity, and freedom of others, including homicide). The initial probability that the perpetrator did not have a record for crimes against persons was 57%. In cases in which the victims were minors or over the age of 64, this probability increased to 81%. On the other hand, when the victims were between the ages of 21 and 64 and the homicide took place outdoors, the probability of the perpetrator having a record rose from 43% to 61%. If, in addition, if he/she fled the crime scene by foot or by vehicle, this probability increased to 66%.

3.1.6. Classification Model for the Type of Relationship Between the Victim and the Aggressor

In this work, it was possible to detail the characteristics of the homicide, the behaviors carried out at the crime scene, and the victim characteristics associated with the socio-demographic characteristics of the perpetrator of simple homicides in Spain, the existence of a criminal record, and the type of relationship between perpetrator and victim. It is important to examine homicides at a multi-variate analysis level, since this criminal phenomenon is quite complex and it is necessary to consider the collective relationships between all of the related components. In this way, an improved understanding of the phenomenon may be acquired, allowing us to reach conclusions that may help to make decisions during a criminal investigation, especially in suspect prioritization tasks. In fact, many criminology and forensic studies have demonstrated their utility for identifying complex interactions between variables that would not be easily detected with other more traditional statistical procedures (e.g., linear models). Another of the advantages is that, unlike other classification methods, the existence of missing values does not interfere with the development of the model, which is quite common when police records are the main source of information.
This work shows that the study of victimology is key during criminal investigations, since these socio-demographic characteristics (gender, age, and country of origin) offer information on potential perpetrators. Furthermore, some authors have recognized that the victim is an extension of the crime scene and, therefore, victim analysis deserves special attention [23,51]. So, this analysis facilitates the crime reconstruction, helps to identify the modus operandi of the perpetrator, and suggests new lines of study that will help reduce the number of suspects.
Together, these results suggest the relevance of creating studies that, based on empirical evidence, contribute to decision-making in order to establish more rigorous suspect prioritization and to improve human resources and materials management. Ultimately, knowledge of how to interpret the modus operandi at homicide scenes and its relation with potential perpetrator characteristics may help reduce the time and economic resources devoted to criminal investigations.

The authors extend sincere thanks to the Office of Coordination and Studies of the Secretary of State and Security of Spain. 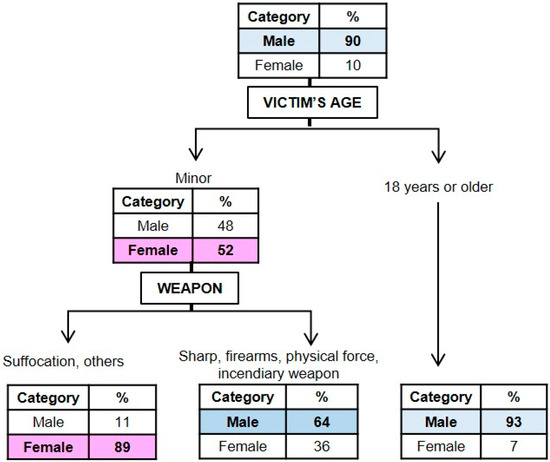 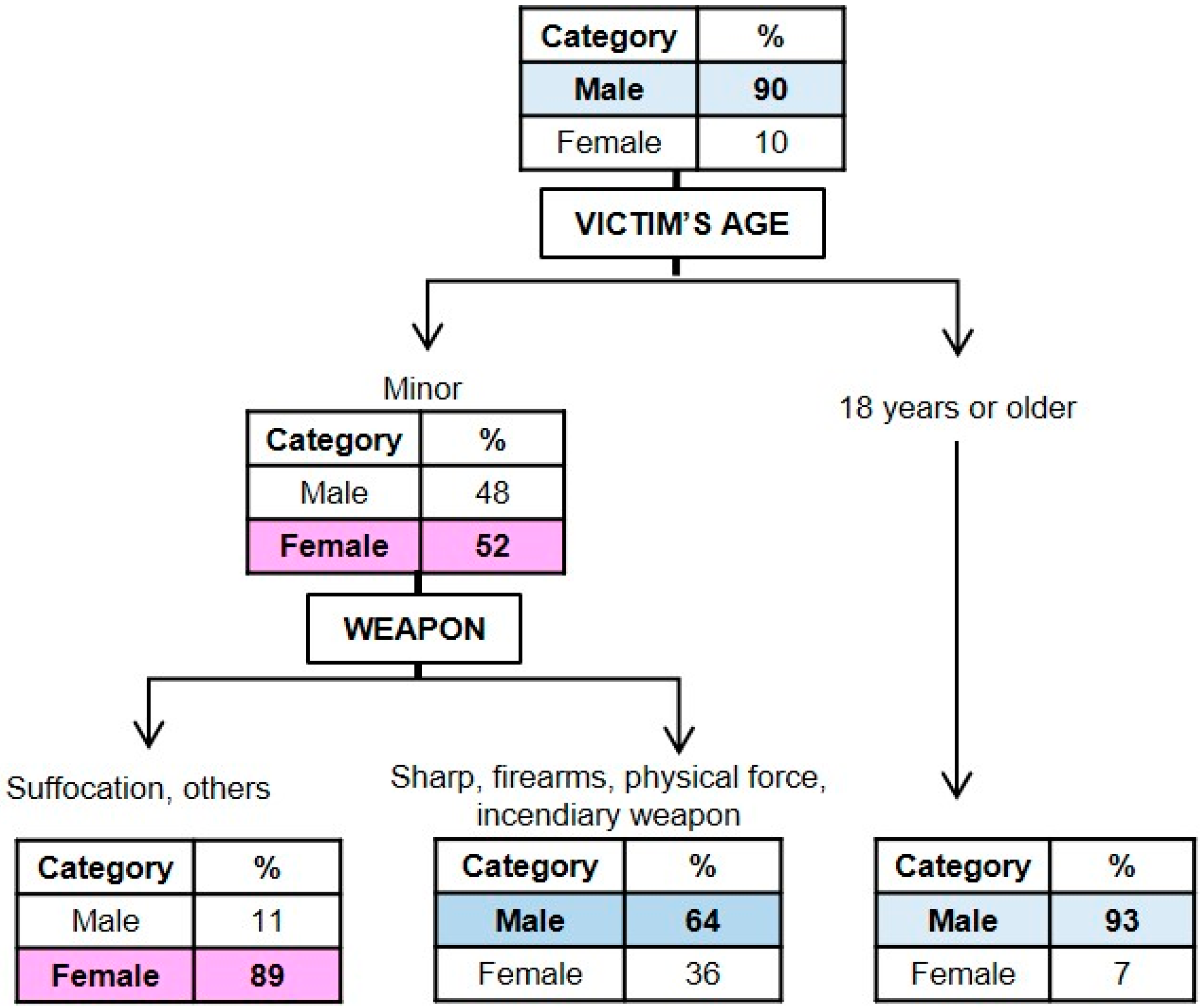 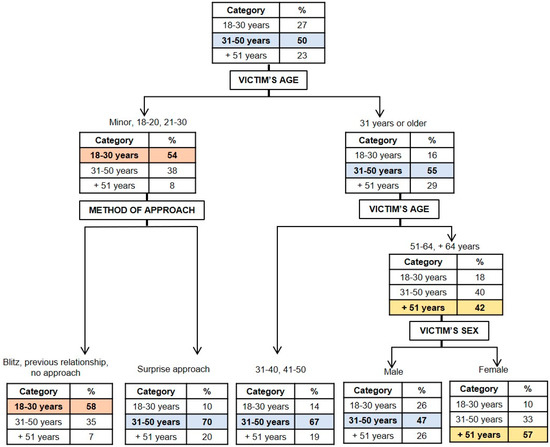 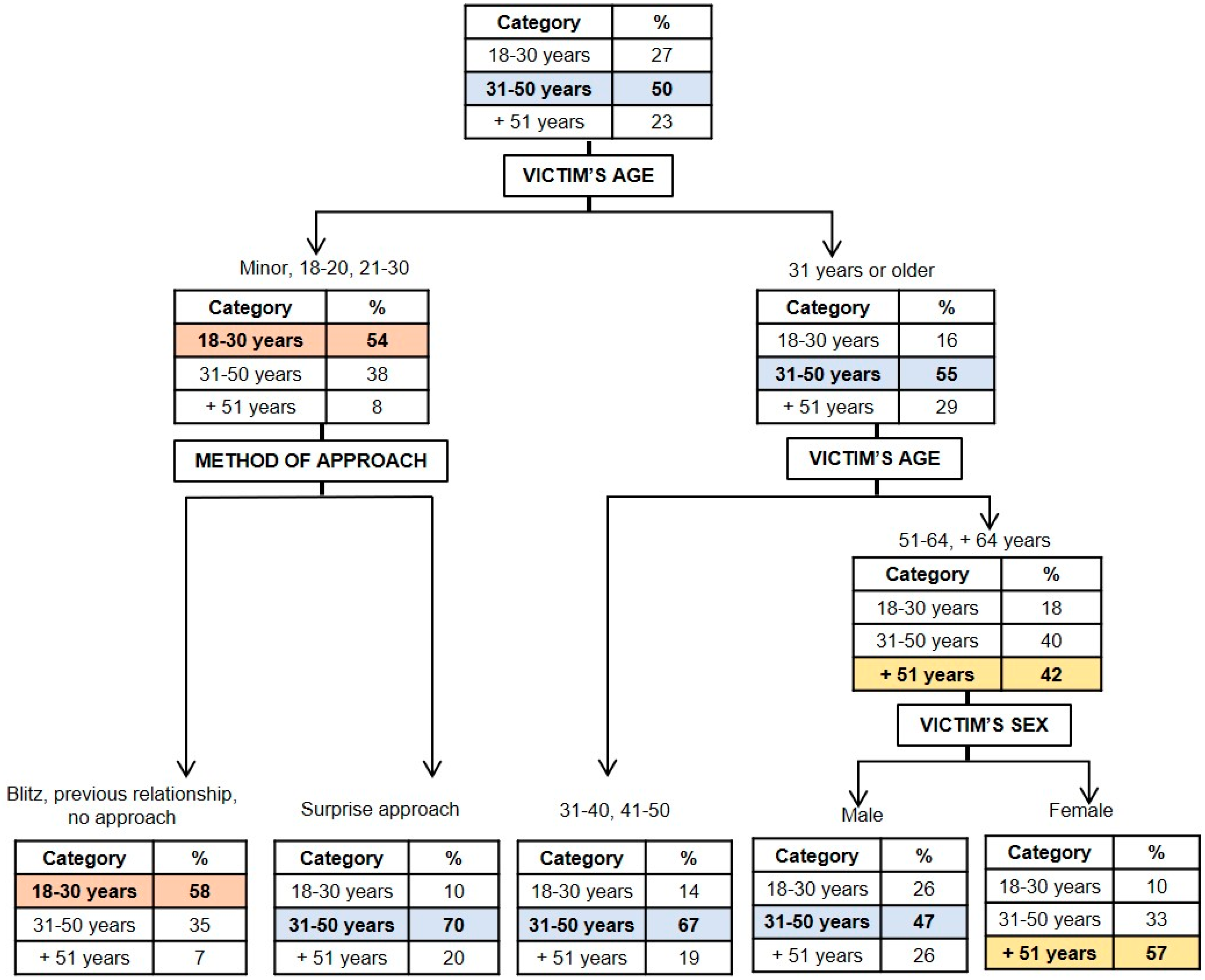 Table 1. Variables used in the classification models.
Table 1. Variables used in the classification models.
© 2019 by the authors. Licensee MDPI, Basel, Switzerland. This article is an open access article distributed under the terms and conditions of the Creative Commons Attribution (CC BY) license (http://creativecommons.org/licenses/by/4.0/).
We use cookies on our website to ensure you get the best experience. Read more about our cookies here.
Accept
We have just recently launched a new version of our website. Help us to further improve by taking part in this short 5 minute survey here. here.
Never show this again