One Size Does Not Fit All: A Comprehensive Clinical Approach to Reducing Suicidal Ideation, Attempts, and Deaths
Next Article in Special Issue

A Study of Perceived Nature, Shade and Trees and Self-Reported Physical Activity in Denver
Previous Article in Special Issue

Adolescent Socioeconomic Status and Mental Health Inequalities in the Netherlands, 2001–2017

We used data from the Dutch Health Behaviour in School-aged Children (HBSC) study, a cross-sectional survey conducted every four years [53,54]. The present study made use of the data collected in the 2001, 2005, 2009, 2013 and 2017 surveys. The HBSC study used identical sampling and survey procedures across the survey years to collect data from nationally representative samples of 11- to 16-year-old adolescents attending the first four classes of secondary education (N = 28,310). A two-stage random cluster sampling procedure was used to obtain the samples. First, a random sample of schools in the Netherlands was drawn, and these were stratified based on urbanisation level. Second, each participating school provided a list of all classes, and 2–5 classes were selected randomly (depending on school size). All students were drawn as a single cluster within the selected classes, to ensure national representativeness survey weights were applied to the data. The response rate of schools ranged from 37% (2013/2017) to 48% (2009). The adolescent response rate was above 92% in all years. Self-report questionnaires (paper-and-pencil from 2001 to 2013 and computer-assisted in 2017) were administered in the classroom, taking ~40–50 min. The surveys took place in October or November of the corresponding year. Participants were informed of their anonymity and participants and parents gave passive consent (participants gave active consent in 2017). Ethical approval was gained from the Ethics Assessment Committee of the Faculty of Social Sciences at Utrecht University (FETC17-079 in 2017).
Participants were included in the study if they had complete data on all SES measures, as well as gender and age, and reported at least one mental health problem measure (n = 27,020, over 95% of the full sample). The size of the included sample was similar across years: 2001 (n = 5277), 2005 (n = 5252), 2009 (n = 5321), 2013 (n = 5167) and 2017 (n = 6003). The mean age in every year was 13.8 (except in 2017, for which it was 13.7). Roughly half the sample was female (ranging from 49.7% in 2013 to 51.5% in 2017).

Parental SES was measured using the Family Affluence Scale (FAS) [55]. The scale consisted of 4 items that indicated family material assets: “Does your family have a car or a van?” (0 = no, 1 = yes, one, 2 = yes, two or more); “Do you have your own bedroom for yourself?” (0 = no, 1 = yes); “How many times did you travel away for holiday/vacation last year?” (0 = not at all, 1 = once, 2 = twice, 3 = more than twice; for the 2013 and 2017 HBSC study “away” was replaced with “abroad”); “How many computers does your family own?” (0 = none, 1 = one, 2 = two, 3 = more than two). Sum scores (range: 0–9) were computed for participants who completed all scale items; higher scores indicated more material assets. FAS, developed for use in the HBSC study, has been shown to be a reliable instrument that is easily answered by adolescents [55]. FAS is a composite indicator, constructed of separate independent items indicating family material assets, so internal consistency between items is not necessary [56]. We compared each adolescent’s absolute FAS sum score to all other scores in the respective survey year and calculated a ridit-based relative score, ranging from 0 to 1, with a mean of 0.5 [57]. By transforming the distribution to relative parental SES per year, we were able to minimise the effect of changes over time in the measure and meaning of FAS items [58,59].
Adolescent subjective SES was measured using the question, “How rich do you think your family is?” The item included a 5-point response scale (1 = very rich, 2 = quite rich, 3 = average, 4 = not so rich, 5 = not rich at all). The scale was reversed so that higher scores indicated higher levels of subjective SES. The measure has been found to be easy to answer for adolescents [54].
Adolescent educational level was measured using a question on the academic track that the adolescent followed. The secondary education system in the Netherlands has four tracks, and responses were dummy coded, with low used as the reference group in our analyses: 1 = low; 2 = lower intermediate; 3 = upper intermediate; 4 = high.

Mental health is considered a multidimensional construct, with positive and negative indicators that are partly independent of one another [60]. As well as examining five indicators of mental health problems (emotional symptoms, conduct problems, hyperactivity, peer problems and psychosomatic complaints), we also include one indicator of positive mental health (life satisfaction).
Emotional symptoms, conduct problems, hyperactivity and peer problems were measured with the SDQ-R: a revised version of the problem subscales of the Strengths and Difficulties Questionnaire (SDQ), which has better psychometric properties than the original self-report SDQ [61]. From 2005 onwards, adolescents completed the Dutch translation of the self-report version of SDQ, which is suitable for 11- to 17-year-olds [62,63]. The SDQ comprises questions on behaviour and feelings over the past six months with 3-point response scales (0 = not true, 1 = somewhat true, 2 = certainly true). Examples of items are “Other children or young people pick on me or bully me” and “I get very angry and often lose my temper.” The SDQ-R consists of 15 items measuring four subscales—emotional symptoms (5 items), conduct problems (4 items), hyperactivity–inattention problems (3 items) and peer relationship problems (3 items) [61,62]. Two subscales—emotional symptoms (Cronbach’s α = 0.69–0.71) and hyperactivity–inattention problems (α = 0.69–0.74)—had acceptable internal consistency in all survey years, and although the other two subscales had lower α coefficients—conduct problems (α = 0.53–0.56) and peer relationship problems (α = 0.42–0.47)—these coefficients were consistent with existing research on the SDQ [61,64]. Previous research has indicated that the self-report SDQ is measurement invariant over time in the Netherlands [49]. Subscale mean scores were computed for participants who completed more than half of the subscale items. Higher subscale scores indicated more problems (ranging from 0 to 10).
Psychosomatic complaints were measured using the HBSC-symptom checklist. The checklist consists of eight items measuring: headache, abdominal pain, backache, dizziness, feeling low, irritability/bad temper, feeling nervous and sleeping difficulties. Each item included a 5-point response scale for reporting how often during the past 6 months the complaint was experienced (1 = about every day to 5 = rarely or never). To ensure that higher scores indicated more problems, we subtracted each score from 5 and computed a composite sum score for participants who completed at least six of the eight subscale items (ranging from 0 to 32) [65]. The checklist had a good internal consistency in all survey years (α = 0.76–0.82) and convergent validity with indicators for emotional symptoms [66].
Life satisfaction was measured using the Cantril Ladder [67]. The scale is an 11-point ladder with steps for reporting how participants feel about their life (0 = worst possible life to 10 = best possible life). The Cantril Ladder is easily understood and has shown high reliability among adolescents [68].

Given gender and age differences in adolescent mental health problems, we controlled for these variables [3]. Gender was measured by asking whether the participant was a girl (coded 0) or boy (coded 1). Age was measured with a question about month and year of birth, which was used to calculate age at the date of data collection. Survey year was recoded to facilitate interpretation (2001 = 1, 2005 = 2, 2009 = 3, 2013 = 4, 2017 = 5) and included in models as a continuous variable.

We used nationally representative self-reported data from 11- to 16-year-old adolescents participating in the Dutch Health Behaviour in School-Aged Children (HBSC) studies in 2001, 2005, 2009, 2013 and 2017 (n = 27,020; see Methods). Table 1 shows changes within the sample in the mean and standard deviation of SES and adolescent mental health problems between 2001 and 2017. The parental SES score was designed to have the same mean for each survey year and mean levels of adolescent subjective SES did not change substantially over time. During the period, there was a 5.4 percentage point decrease in Dutch adolescents in the low educational level and an 8.5 percentage point increase in participation in the high educational level. Mean levels of the mental health problems were quite low, except for hyperactivity, which was moderate, whereas life satisfaction was quite high.
Table 2 shows that all three SES indicators had small positive associations with each other (rs range from 0.11 to 0.38), indicating that they measured different dimensions of SES that may have an underlying component. Mental health problems were positively associated with each other (rs range from 0.11 to 0.63) and negatively associated with life satisfaction (rs range from 0.19 to 0.46). Associations were mostly small in size (|r|< 0.30), suggesting that the indicators measured different dimensions of mental health problems that may have an underlying component.
Table 3 shows the results of the linear regression models examining socioeconomic inequalities in adolescent mental health. Model 1, which included only control variables, showed age and gender differences in adolescent mental health problems. Boys reported higher levels of conduct problems and higher life satisfaction, though the effects were small. Girls reported higher levels of emotional symptoms and psychosomatic complaints; the effects were medium-sized. Gender differences in peer problems and hyperactivity were absent or of negligible size. Age differences in mental health problems were negligible, but younger adolescents reported somewhat higher levels of life satisfaction.

Model 5a shows that there was a negligible increase in emotional symptoms and a small increase hyperactivity (between 2005 and 2017) and a small increase in psychosomatic complaints and a negligible decrease in life satisfaction (between 2001 and 2017). Model 5b shows no significant changes in the associations between the SES indicators and adolescent mental health problems and life satisfaction over time, and Models 6a and 6b show no significant changes in the moderation effects of adolescent subjective SES and adolescent educational level on the association between parental SES and adolescent mental health problems and life satisfaction. As a sensitivity analysis, we also ran models with survey year as a categorical variable, but the results were not substantially different.

4.3. No Changes in Socioeconomic Inequalities in Adolescent Mental Health

The large, nationally representative HBSC dataset, with consistency in the survey questions and sampling procedures across a 16-year time span enabled us to include multiple SES indicators and mental health measures, consider time trends and use data from tens of thousands of adolescents, which provides confidence about the robustness of our results. However, this study also has several limitations. First, differences in the characteristics of the five samples (other than gender and age, which we control for), such as potential changes over time in family structure, may be responsible for the consistent association between the SES indicators and adolescent mental health problems over time. Nevertheless, by using national representative data at all time points, we are able to assess how SES associations with mental health problems have changed in the general adolescent population in the Netherlands. Secondly, our measure of parental SES was designed for cross-national research and is skewed towards high parental SES in the Dutch sample, though by using a relative measure we were able to lessen this limitation [2]. Further research could explore whether other measures of parental SES (such as parental income or occupation) have similar associations with adolescent mental health problems and if they interact with adolescent subjective SES. Thirdly, the cross-sectional nature of the data does not enable us to draw causal conclusions. As discussed, mental health may partly influence both subjective SES and educational level, or share (genetic) factors which confound the association. Fourthly, we did not have data for SDQ-R measured mental health problems in 2001, though this was mitigated by our lack of findings of changes in psychosomatic complaints and life satisfaction for the full time-period studied. Fifthly, our results for early adolescents (aged 11–16) in the Netherlands may not generalise to older adolescents or adolescents living in other countries, though many of our findings support existing evidence with different samples.

This work was supported by funding from Dynamics of Youth (Utrecht University).

We thank all the participants in the Dutch HBSC project.

The authors declare no conflicts of interest. The funders had no role in the design of the study; in the collection, analyses or interpretation of data; in the writing of the manuscript; or in the decision to publish the results. 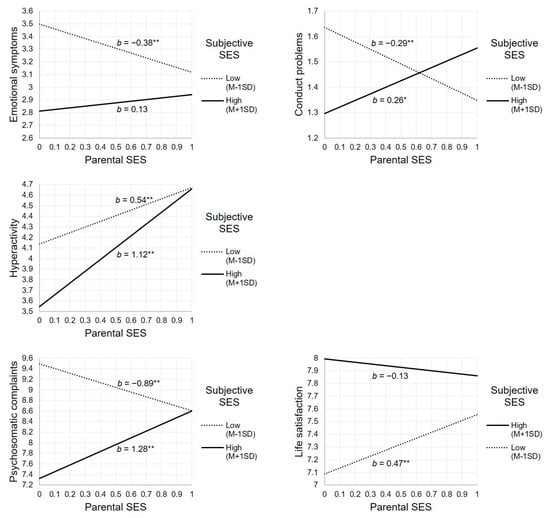