The Pros and Cons of the Prediction Game: The Never-ending Debate of Mortality in the Intensive Care Unit
Previous Article in Journal

Does Health Insurance Modify the Association Between Race and Cancer-Specific Survival in Patients with Urinary Bladder Malignancy in the U.S.?

Background: Scientific evidence on the effect of health insurance on racial disparities in urinary bladder cancer patients’ survival is scant. The objective of our study was to determine whether insurance status modifies the association between race and bladder cancer specific survival during 2007–2015. Methods: The 2015 database of the cancer surveillance program of the National Cancer Institute (n = 39,587) was used. The independent variable was race (White, Black and Asian Pacific Islanders (API)), the main outcome was cancer specific survival. Health insurance was divided into uninsured, any Medicaid and insured. An adjusted model with an interaction term for race and insurance status was computed. Unadjusted and adjusted Cox regression analysis were applied. Results: Health insurance was a statistically significant effect modifier of the association between race and survival. Whereas, API had a lower hazard of death among the patients with Medicaid insurance (HR 0.67; 95% CI 0.48–0.94 compared with White patients, no differences in survival was found between Black and White urinary bladder carcinoma patients (HR 1.24; 95% CI 0.95–1.61). This may be due a lack of power. Among the insured study participants, Blacks were 1.46 times more likely than Whites to die of bladder cancer during the 5-year follow-up (95% CI 1.30–1.64). Conclusions: While race is accepted as a poor prognostic factor in the mortality from bladder cancer, insurance status can help to explain some of the survival differences across races. View Full-Text
Keywords: carcinoma; transitional cell; mortality; survival rate; urinary bladder neoplasms carcinoma; transitional cell; mortality; survival rate; urinary bladder neoplasms
►▼ Show Figures 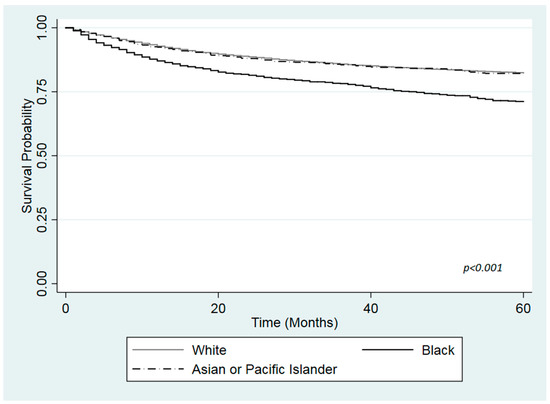