Communicating Risk for a Climate-Sensitive Disease: A Case Study of Valley Fever in Central California
Next Article in Special Issue

Insomnia in Schizophrenia Patients: Prevalence and Quality of Life
Previous Article in Journal

The Association of Internet Use with Wellbeing, Mental Health and Health Behaviours of Persons with Disabilities

A Correlational Analysis of the Relationships among Intolerance of Uncertainty, Anxiety Sensitivity, Subjective Sleep Quality, and Insomnia Symptoms

:
In this study, we used structural equation modeling to investigate the interplay among Intolerance of Uncertainty (IU), Anxiety Sensitivity (AS), and sleep problems. Three hundred undergraduate students completed the Intolerance of Uncertainty Scale, the Intolerance of Uncertainty Inventory, the Anxiety Sensitivity Index, the Beck Depression Inventory, the State-Trait Anxiety Inventory, the Pittsburgh Sleep Quality Index and the Insomnia Severity Index. 68% and 40% of the students reported poor sleep quality or sub-threshold insomnia problems, respectively. Depression and anxiety levels were above the cut-off for about one-fourth of the participants. Structural equation modeling revealed that IU was strongly associated with AS, in turn influencing both insomnia severity and sleep quality via depression and anxiety. Significant indirect effects revealed that an anxious pathway was more strongly associated with insomnia severity, while a depression pathway was more relevant for worsening the quality of sleep. We discussed the results in the frameworks of cognitive models of insomnia. Viewing AS and IU as antecedents of sleep problems and assigning to AS a pivotal role, our study suggested indications for clinical interventions on a population at risk for sleep disorders.
Keywords:
intolerance of uncertainty; anxiety sensitivity; sleep quality; insomnia severity; mediation analyses; depression; anxiety

The participants were 300 undergraduate students at the University of L’Aquila, Italy (57 men, 239 women, 4 of undisclosed gender). Their mean age was 21.38 years (SD = 4.02 years). An interviewer explained the study goals to potential participants and informed them that they could withdraw from the study, and their responses would have remained anonymous. We got verbal consent from all participants before data collection. The study was conducted in accordance with the Declaration of Helsinki. The ethical review board of the University of L’Aquila, Italy, approved the study (protocol n. 23038, 20 September 2016). The data were collected during the fall semester of the 2016–2017 academic year.

Intolerance of Uncertainty Scale (IUS-12): The IUS-12 is a 12-item scale describing negative beliefs about uncertainty and future events that might have negative consequences [40]. Participants gave responses using a five-point scale. The total score (α = 0.87, in this study) provides a valid measure of intolerance of uncertainty.
Intolerance of Uncertainty Inventory (IUI-A): The IUI-A is a 12-item scale developed to assesses core beliefs about intolerance of uncertainty [41]. The IUI-A items were devised to assess the tendency for a person to consider uncertainties in life to be unacceptable and threatening. These beliefs were added later to the theoretical definition of the intolerance of uncertainty construct and were not addressed in the IUS-12. The items were administered using a 5-point scale ranging from 1 (‘not at all characteristic of me’) to 5 (‘entirely characteristic of me’). The total score is a valid measure of intolerance of uncertainty as currently defined (α = 0.89, in this study).
Anxiety Sensitivity Index (ASI-3): The ASI-3 is an 18-item scale assessing the tendency to fear the symptoms of anxiety [28]. Responses were given using a five-point Likert scale. The ASI-3 yields three subscale scores: Fear of somatic sensations (α = 0.87), fear of loss of cognitive or psychological control (α = 0.83), and fear of publicly observable anxiety symptoms (α = 0.80).
The Beck Depression Inventory (BDI-II): The BDI-II [42] is a 21-item scale assessing affective, somatic, and cognitive symptoms of depression. Respondents rated the severity of each symptom using a 0 to 3 scale; higher scores represent more severe symptoms. The total score (α = 0.90 in this study) is a valid measure of depression severity. Ranges representing ‘light’ (14–19), ‘mild’ (20–29), ‘moderate’ (30–63) and ‘severe’ (64 or higher) symptoms of depression have been defined.
Trait anxiety: We used the 20-item trait subscale of the State-Trait Anxiety Inventory (STAI-Y) Italian version to assess the tendency to experience enduring anxiety states such as fear, worry, activation of the autonomic nervous system, and somatic symptoms [43]. Participants rated the habitual intensity of each symptom on a four-point Likert scale. The total score is a valid measure of trait anxiety (α = 0.90, in this study). The recommended clinical cut-off is >46 [44].
The Pittsburgh Sleep Quality Index (PSQI): The PSQI measures retrospective sleep quality and disturbances over one month [45]. It comprises nineteen questions that yield seven clinically derived component scores: Sleep quality, sleep latency, sleep duration, habitual sleep efficiency, sleep disturbances, use of sleeping medication, and daytime dysfunctions. All component scores range from 0 to 3, and the Global Score (α = 0.67 in the present study) ranges from 0 to 21. A conventional cutoff score of >5 is used to separate poor sleepers from good sleepers.
The Insomnia Severity Index (ISI): The ISI consists of seven items reflecting the criteria of the Diagnostic and Statistical Manual of mental disorders (DSM-IV) for an insomnia disorder [46]. These are sleep onset, sleep maintenance, early morning awakening problems, sleep dissatisfaction, the extent to which sleep problems interfere with daytime functioning, whether one’s sleep problems are noticeable to others, and the distress caused by sleep difficulties. Respondents rated symptom severity during the past two weeks using a five-point scale (0 = affected me very little to 4 = affected me a lot). The ISI yields a total score ranging from 0 to 28 (α = 0.82 in this study). The guidelines for interpretation are as follows: 0–7 = no clinically significant insomnia; 8–14 = subthreshold insomnia; 15–21 = clinical insomnia of moderate severity; 22–28 = severe clinical insomnia.

The study hypotheses were tested using a Structural Equation Modeling (SEM). Model 1 showed the hypothesis that only the intolerance of uncertainty was associated with the sleep variables (i.e., sleep quality and insomnia severity). Model 2 adjusted for the effects of anxiety sensitivity, anxiety, and depression. Model 3 added an indirect relationship of intolerance of uncertainty with the sleep variables through anxiety sensitivity, controlling for anxiety and depression. An indirect relationship is the product of the coefficients for the indirect paths that link two latent variables via other latent variables, and its significance can be tested using the approach outlined in Macho and Ledermann [47]. Model 4 displayed an indirect relationship of intolerance of uncertainty with anxiety, depression, and sleep variables through anxiety sensitivity, with anxiety and depression, which are also directly related to sleep variables. Model 5 was equivalent to Model 4, except that anxiety sensitivity was associated with anxiety and depression but not with the sleep variables. In Model 6, the relationship of intolerance of uncertainty with the sleep variables was through anxiety sensitivity, anxiety, and depression. The models are reported in Figure 1.
Each latent variable in the models was derived from related empirical indicators. For intolerance of uncertainty, we used the IUS-12 and the IUI-A scores. For anxiety sensitivity, we used the mental, cognitive, and social scores of the ASI-3. For anxiety, depression, sleep quality, and insomnia severity, we used item parcels, each of which was a composite score reflecting a set of homogeneous items. Because the proper use of parceling depends on the dimensionality of the items being combined [48], we ran preliminary principal component analyses to assess this. The parceling method produced unidimensional and convergent indicators for each latent variable supporting a proper use of the method (Table A1).
Because the data did not meet the multivariate normality assumption, the SEMs were estimated using the maximum likelihood robust (MLR) method using EQS 6.4, which corrects the parameters and fit indices of the models for non-normality [49]. Model fit was assessed using the following indices: Satorra–Bentler scaled χ2 (SBχ2), the robust version of comparative fit index (CFI), Bentler–Bonnett non-normed fit index (NNFI), and root-mean-square error of approximation (RMSEA), and the standardized root mean square residual (SRMR). The criteria for a good fit [50] are as follows: ≥0.95 for NNFI and CFI, ≤0.06 for RMSEA, and ≤0.08 for SRMR.
Hierarchically nested models can be derived one from the other only adding or removing paths and can be compared to each other using the scaled Chi-square difference test [51]. If the test is not significant, the model with less free parameters should be preferred. Non-nested models can be compared descriptively, using the Akaike information criterion (AIC) and the AIC with the correction for finite sample sizes (CAIC); in both cases, the model with the lowest value offers the best fit to the data [52].

About two-thirds of the participants (n = 205, 68%) were poor sleepers, and 125 (40%) reported subthreshold insomnia. Twenty participants (7%) reported moderate or severe insomnia. About a quarter of participants (n = 76, 25%) reported above-threshold depression symptoms and a similar proportion (n = 78, 26%) reported above-threshold anxiety symptoms. As expected, above-threshold depression was strongly associated with insomnia severity (χ2 = 17.85; df = 1; p < 0.001), poor sleep quality (χ2 = 13.90; df = 1; p < 0.001), and anxiety (χ2 = 30.90; df = 1; p < 0.001). Anxiety was associated with insomnia severity (χ2 = 8.51; df = 1; p < 0.005), but not with poor sleep quality. These findings were confirmed by analyses of continuous data (see Table 1). Depression was moderately correlated with both sleep variables, whereas the effect sizes for the relationships between the sleep variables and anxiety were small-medium. The intolerance of uncertainty score was moderately correlated with scores on the anxiety sensitivity subscales, and both anxiety sensitivity and IU were associated with insomnia severity. 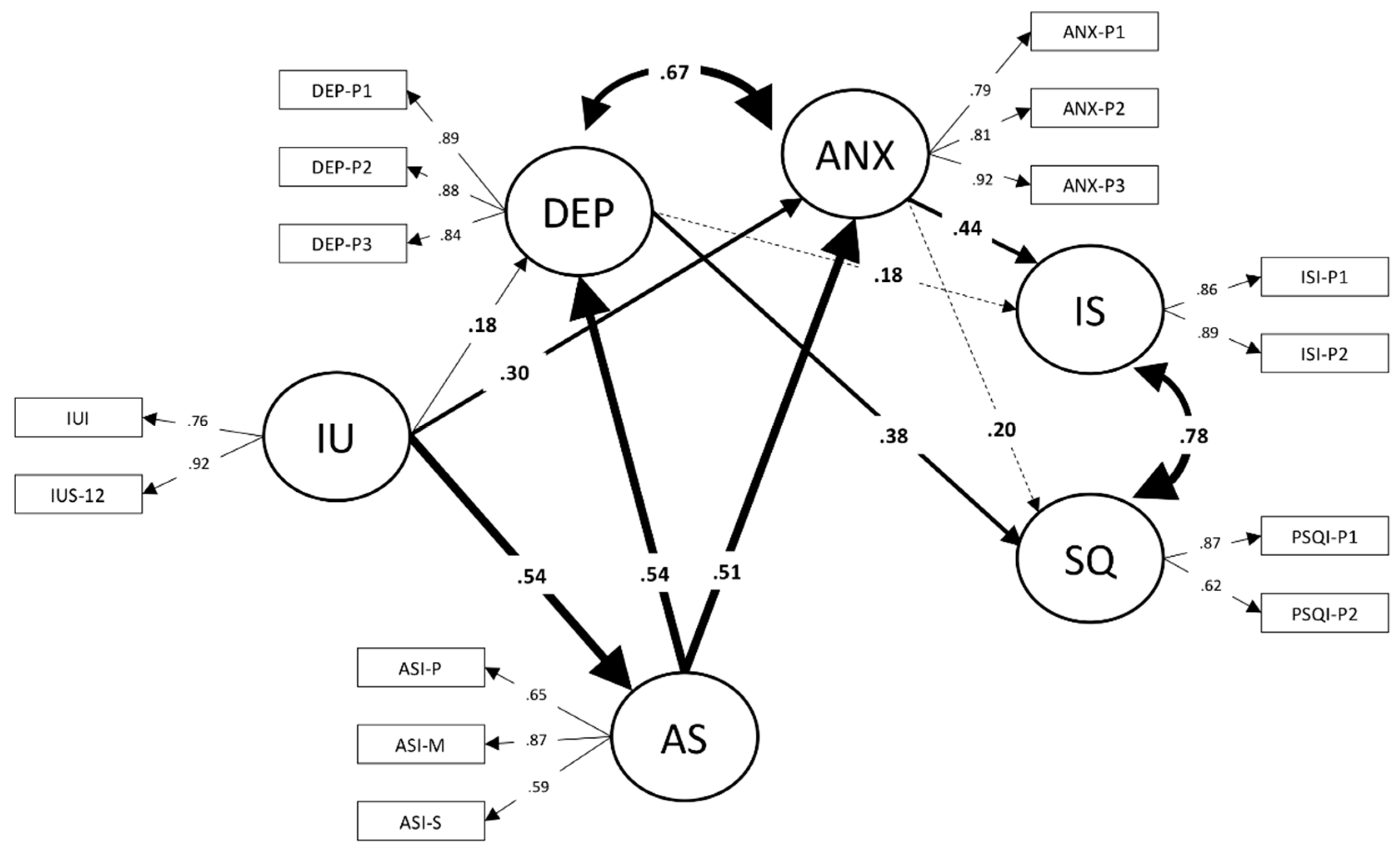